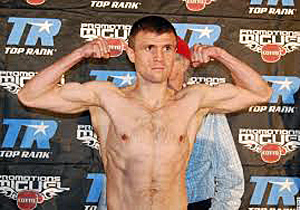 Flyweight contender Brian Viloria is scheduled to headline an UniMas-televised card on Dec. 6 at the Auditorium in Glendale, California.

Other world title contenders will also appear on the card, according to Brad Goodman, a matchmaker for Top Rank, which is promoting the show.

Also appearing on the card will be junior lightweight prospect Saul Rodriguez.

The Russia-born Novikov (29-1, 10 KOs) lost a competitive unanimous decision to Jessie Vargas in his last fight on Aug. 2 in Las Vegas, Nevada.

Like Novikov, Felix (27-1-1, 22 KOs) lost his only professional bout in an attempt at a major title. Felix lost to interim junior lightweight titlist Bryan Vasquez on April 12 in Las Vegas. He rebounded from that fight with a sixth-round technical knockout over Alejandro Rodriguez on Aug. 9 in Glendale.

Rodriguez (14-0-1, 11 KOs) has won six bouts in a row by knockout. He trains with Robert Garcia in Oxnard, California.

Opponents have yet to be announced for all four fighters.