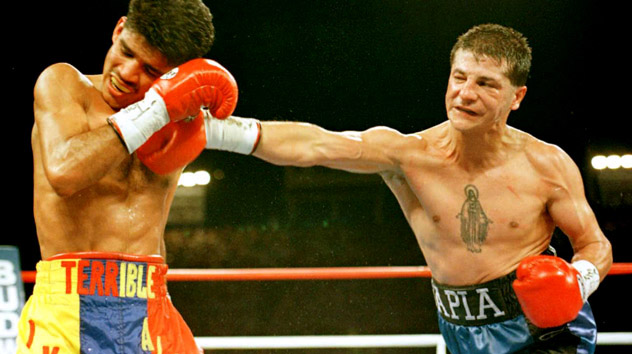 A documentary on the life of five-time world champion Johnny Tapia will premiere Dec. 16 on HBO. Executive produced by Curtis “50 Cent” Jackson and promoter Lou DiBella, the film will take a look at the often-tumultuous life of the fighter who passed away in 2012 of heart failure at the age of 45.

“This is not a boxing film, but a film about tragedy, triumph, demons and redemption,” says DiBella according to a press release issued by HBO Sports. “Johnny gives us an honest assessment of his strengths and frailties; he reminds us of the power and resiliency of the human spirit.”

Tapia finished his 22-year career with a record of 59-5-2 with 30 knockouts. Along the way he became a fan favorite but also earned a reputation for his troubled life outside of the ring. His well-documented battles with drug use and mental illness plagued his career but despite his transgressions outside of the ring, Tapia won world titles as a junior bantamweight, bantamweight and featherweight. Many would say that Tapia fought just as hard with his demons as he did his opponents in the ring.

“Johnny’s is a story that needed to be told,” says Jackson. “Everyone can relate to some aspect of it, which makes it that much more powerful. Personally, his journey is one that has touched me greatly.”

Fittingly nicknamed “Mi Vida Loca” (“My Crazy Life”), Tapia managed to regain control of his life with the help of his wife, Teresa, before losing his life in his Albuquerque home in 2012.

“Johnny Tapia’s life story was an incredible journey, and we are eager to celebrate his biggest accomplishments and chronicle the toughest and most difficult moments of his turbulent life,” said HBO executive producer Rick Bernstein. “Tapia was so much more than just a world champion, and we want to share this gripping account with our subscribers, many of whom may have seen Johnny in his five fights on HBO, but may not know the amazing story behind the fighter.”