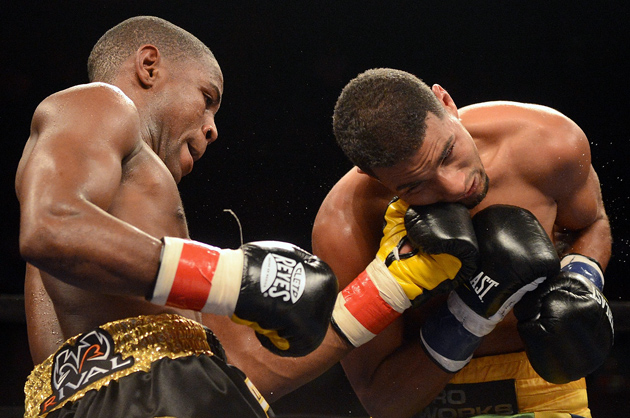 Junior lightweight contender Javier Fortuna knocked out Abner Cotto in Round 5 of their Showtime-televised bout on the undercard of the Andrzej Fonfara-Doudou Ngumbu light heavyweight fight on Saturday at UIC Pavilion in Chicago. It was an ugly, foul-filled affair while it lasted.

Fortuna (26-0-1, 19 knockouts), an athletic 26-year-old switch-hitter from the Dominican Republic, started fast and aggressive but had his momentum disrupted by two rabbit punches from Cotto in Round 2. The fouls forced Fortuna to the canvas and novice referee Lou Hall wrongfully called ruled it a knockdown before penalizing Cotto (18-3, 8 KOs) one point at the end of the round.

Fortuna alternately pressed the taller man and bombed with pot shots on the fly in Round 3, but Cotto, to his credit remained poised under fire. To the 27-year-old Puerto Rican’s discredit he continued o deliver foul punches in Round 4 by twice nailing Fortuna below the belt. The second low blow sent Fortuna to the canvas but at least Hall didn’t call it a knockdown.

Not to be outdone in the unruly behavior department, an angry Fortuna took a swipe at Cotto just after the bell ending Round 4. He missed but Cotto took advantage of the attempted foul by flopping to the canvas NBA style. Hall docked Fortuna a point for the infraction.

However, the point deductions were rendered moot when Fortuna connected with a left hook in Round 5. Cotto, who has now lost three of his last five bouts, crumpled to the canvas where he was counted out by Hall.