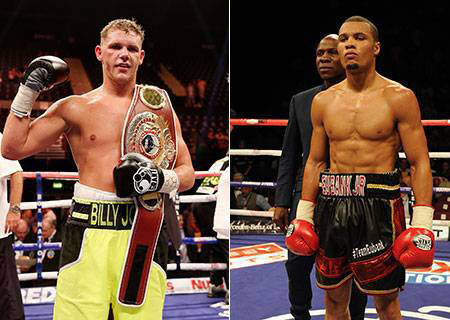 The stakes just got higher for British middleweight rivals Billy Joe Saunders and Chris Eubank Jr. in advance of their clash on Nov. 29 at the ExCeL Arena in London.

Already a battle of unbeatens in support of the rematch between heavyweights Tyson Fury and Dereck Chisora, Saunders-Eubank Jr., on Thursday, was designated an eliminator for the right to face the winner of the Dec. 13 Matt Korobov-Andy Lee fight for the WBO’s vacant belt.

“That is correct,” said Jose Izquierdo, general secretary of the WBO. “That was decided on, today, during a meeting at our convention here at Caesars Palace in Las Vegas.”

“I can’t wait for it, this is what I’m this sport for, face the best, beat the best and become world champion. This is a huge fight already,” said Saunders. “But it’s even bigger now with the world title eliminator added. The pressure’s on, but that’s how I like it,” said Saunders.

Saunders was last in action for an eighth round knockout of Emanuele Blandamura in July, and Eubank, the son of the former beltholder, will be after his 11th consecutive stoppage victory.

Eubank stopped Omar Siala in the second round of his last bout on Saturday and had previously been in action for a first round knockout of Ivan Jukic in July.

“At the moment, my mind is focussed on beating Eubank Jr., and everything I’m doing out here in Marbella is geared towards that. I’m going to smash Eubank Jr. to bits,” said Saunders of Eubank, who has spent time, recently, training at the Las Vegas-based gym of Floyd Mayweather Jr.

“I’m going to prove that I’m the man who is real world championship material, not that hand puppet from Brighton. Regardless of title belts and money, what’s motivating me is glory, and being recognised as the man who destroyed Chris Eubank Jr.”

Since facing Fury, Chisora has gone 6-3 with four knockouts. He has won five consecutive bouts, three by stoppage, and is coming off a unanimous decision over Kevin Johnson in February.

Since facing Chisora, Fury is 7-0 with six knockouts. In his last bout, Fury scored a fourth round stoppage of Joey Abell that followed a seventh round knockout of former RING cruiserweight champion Steve Cunningham.

Below are other key bouts on a card entitled, “Bad Blood:”

Andy Ruiz has been called “hands down the best heavyweight that America has” by former champion George Foreman.

A 6-foot-2, 25-year-old who is nicknamed “The Destroyer,” Ruiz (23-0, 17 knockouts) has stopped his past nine opponents heading into a Dec. 20 fight with former titleholder Sergei Liakhovich (26-6, 16 KOs) at The Celebrity Theater in Phoenix, Ariz., to be televised on UniMas.

But Foreman added a caveat to his assertion: Don’t lose too much weight.

Ruiz is coming off last Saturday’s first-round knockout of Kenny Lemos, for which he weighed nearly 273 pounds.

“Don’t judge him on his appearance, because that’s just the way that he looks,” said Foreman, who weighted 250-pounds when his 10th-round knockout of Michael Moorer made him the oldest man to win a heavyweight championship at the age of 45 in November 1994. “I just hope that he doesn’t start trying to trim up and doing all of that stuff and trying to make himself look like a Sylvester Stallone.”

Although Top Rank CEO Bob Arum has agreed with Foreman, he does believe Ruiz “should lose a little” weight.

Ruiz’s victory over Lemos followed successive stoppages of previously unbeaten Joe Hanks in the fourth round in July 2013, Tor Hamer in the third round last November, and Manuel Quezada in the second round in May.

Liakhovich, 38, is 3-5 with two knockouts since rising from a seventh-round knockdown to defeat Lamon Brewster for the WBO belt in April 2006. He ended a three-fight losing streak in February with his unanimous decision over Chad Davis, who was 5-11 coming in.

Prior to Davis, Liakhovich had been stopped by Robert Helenius, Bryant Jennings and Deontay Wilder, the latter in the first round in August 2013. Liakhovich has also lost to former titleholders Shannon Briggs and Nikolay Valuev by 12th-round stoppage and unanimous decision.

“The boys think that Liakhovich is an experienced guy,” said Arum. “He’s been in there with a lot of people, so, let’s see how Andy deals with him.”

Former junior featherweight beltholder Rico Ramos, former junior middleweight titleholder Sergio Mora, and title challenger Edwin Rodriguez are among those who have been added to a Dec. 11 card headlined by 154-pound Austin Trout against Luis Grajeda at the Pechanga Resort and Casino in Temecula, Calif., matchmaker Tom Brown of Goossen Promotions announced on Friday.

Others to be featured are former titleholder Antonio Tarver and title challenger Chris Arreola in separate heavyweight fights, as well as undefeated light heavyweights Marcus Brown and Ahmed Elbiale in separate bouts, and a junior featherweight match-up between Oscar Escandon and Tyson Cave.

“We could not be any more excited to bring this outstanding ‘Night of Champions’ boxing event to the beautiful Pechanga Resort & Casino,” said Brown. “It is always great to provide their fans with an action-packed show.”

“Night of Champions” will be televised as a three-hour ESPN boxing special on ESPN 2, ESPN Deportes and WatchESPN starting at 10 p.m. ET/7 p.m. PT.

“We wanted to do something special in honor of Dan Goossen, and we thought of no better way than to put on a great night of boxing just like he had done for so many years on ESPN,” said Brian Kweder, ESPN senior director of programming and acquisitions.

“Dan’s contributions to the sport of boxing are well documented, but he was also a joy to work with and be around. I’m hopeful that he has a ringside seat wherever he may be for these fights.”

“Jack must first prove he is the best light middleweight in Europe, which I’m sure he will do,” said promoter Kalle Sauerland. “Then, he can move on to bigger and better things. I have every confidence we are looking at a future world champion.”

A 29-year-old from Hamburg, Germany, Culcay will defend the European title he won in his last fight in August, when he rose from a third-round knockdown to defeat previously undefeated Issac Real by unanimous decision.

“I want to make a statement against Varon and show everybody why I’m the European Champion,” said Culcay, who unanimously decisioned Guido Nicolas Pitto at The EWE Arena in October 2013 to avenge a split-decision loss from April 2013 in Hamburg.

“It’s great to have my first defense in Oldenburg. This is where I redeemed myself last year, beating Pitto…That’s a good omen for me. I plan to remain undefeated at the EWE Arena.”

Culcay has been training with former titleholder Joey Gamache.

“I want to established myself as European Champion and gain more experience,” said Culcay. “When my team and management decide it’s time for a world title shot, I’ll be ready and I won’t let the opportunity pass me by.”

Note: Culcay and Sauerland quotes from a release