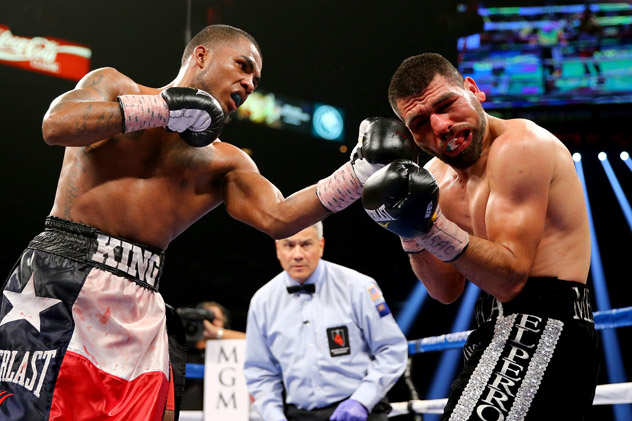 Middleweight James De La Rosa will dedicate his next fight to retired boxer Emanuel Augustus, a former sparring partner who was hospitalized in critical condition after being shot in the head as an innocent bystander to an argument earlier this month.

[See update on Augustus below]

A resident of Harlingen, Texas, who has breathed new life into what was once a struggling career, De La Rosa (23-2, 13 knockouts) credits his switching-hitting style to training sessions as a teenager with Augustus, whom Floyd Mayweather Jr. once called his most difficult opponent.

Coming off last month’s unanimous decision over Alfredo Angulo, De La Rosa, 26, will next face unbeaten Hugo Centeno (21-0, 11 KOs) in support of a 160-pound match-up between Gabriel Rosado and David Lemieux at Barclays Center in Brooklyn, N.Y., on Dec. 6.

A winner of his last two, De La Rosa, 26, is motivated not only by having endured a late rally by Angulo in the ninth and 10th rounds of their 162-pound bout but also by his new management after having gone 2-2 over the course of his previous four fights under promoter Don King.

Centeno is coming off consecutive wins over Angel Osuna by 10th-round knockout in December and Gerardo Ibarra by unanimous decision in his last fight in June.

Trained by his father, Peter, De La Rosa spoke to RingTV.com regarding his career and other subjects.

De La Rosa on his recovery from the losses to Conyers and Willis:

“My dad, Peter De La Rosa was my head trainer those fights and is currently still my trainer. It’s no secret I was with Don King from 2009 until this summer. That’s five years, four fights. It broke my spirit as a fighter and I didn’t work as hard.

“I’m not making excuses but both losses were coming off of a year layoff. Now I’m free and I’m active again. So I’m confident again in the ring. Taking nothing away from Conyers and Willis, I took the fights and they beat me but who I was then is not who I am now.”

On his ability to fight as a switch-hitter against Angulo:

“It was something I learned from sparring Emanuel Augustus at age 14. It helps to open up different shots and throw guys off. I believe I forced Angulo to think in the ring a little more than what he was prepared.

“I think that took away from Angulo being Angulo. The second-round knockdown was from a stance Alfredo wasn’t prepared for, so switching clearly benefited me against Angulo. Much credit to Emanuel Augustus for different tactics he taught me.”

On his back flip after defeating Angulo:

“So I just decided that after I win, I’m going to show off my hops and also show people I’m conditioned well enough to flip after a battle. I’m enjoying it now but as I get older, I may have to substitute it for something more safe.”

On how he sees the Centeno fight transpiring tactically:

“Centeno Jr. is a good boxer who throws a sneaky uppercut but doesn’t take risks in the ring. He isn’t a power-puncher. He pretty much plays it safe. I’m sparring against two guys that fought him. And I’m going to watch film of the Angel Osuna and ‘J Rock’ [Centeno’s no-contest with Julian Williams] fights to see what more I can add to the pot to ensure victory against Hugo.

“I know everyone will be expecting a lot from me because of how I beat Angulo, so I have to work just as hard and smart to look good on HBO. I’m also dedicating this fight to Emanuel Augustus and his road to 100 percent recovery.”

Note: Augustus still was in critical condition on Monday at local hospital in Baton Rouge, according to an official with the city’s police department.

“At this present time, we do not have any change in his condition,” said corporal Don Coppola of the Baton Rouge, La., police department. “We’ve reached out to the investigator handling the case and he has not been notified of any change. So as of right now, there is no change.”

The department is not permitted to release the name of the venue in which Augustus is convalescing.