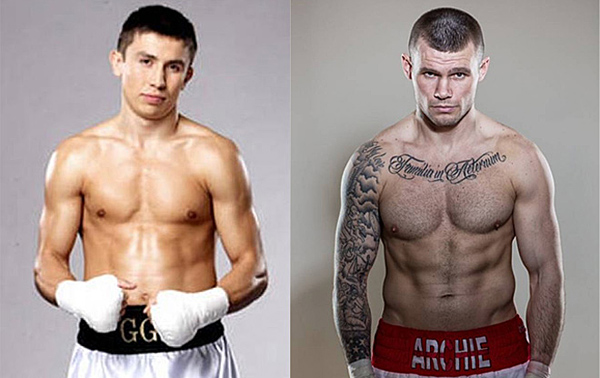 26
Oct
by Lem Satterfield
Undefeated middleweight titleholder Gennady Golovkin will defend his WBA belt against British contender Martin Murray on Feb. 21 in Monte Carlo, promoters Ron Berman of Golden Gloves and Tom Loeffler of K2 Promotions announced on Saturday.
The bout be televised on HBO in the U.S.
With Golovkin (31-0, 28 knockouts) at ringside on Saturday, Murray (28-1-1, 12 knockouts) won a seventh-round technical decision victory over Domenico Spada at Salle des etoiles, Monte Carlo. Golovkin, 32, will pursue the 13th defense of his belt.

“Murray is generally regarded as the best middleweight outside the world champions,” said Berman. “As we all know, he’s a world champion without a belt. He won’t be intimidated for one second fighting ‘GGG’, unlike all of Golovkin’s challengers.”

The win by Murray, 32, was his was his fourth straight since losing a unanimous decision to then-RING champion Sergio Martinez, whom he dropped in Round 8 of a failed bid to earn the WBC belt in April 2013.

In his last fight on Oct. 18, Golovkin stopped Marco Antonio Rubio in the second round.

“Arguably, Martin Murray will be the toughest opponent Gennady has ever faced. It’s a great way to follow up the Marco Antonio Rubio win, coming back to Europe and Monte Carlo against a top-rated middleweight contender,” said Loeffler.

“It fits in perfectly as Murray has shown he is world class and Gennady wants to continue to prove himself the most exciting fighter out there. Gennady is making big inroads in the U.S., but it’s also important for the fight to be in prime time in Europe where he has so many fans.”

The win over Rubio was the third of the year for Golovkin, who had knocked out Osumanu Adama in the seventh round in February, and ex-beltholder Daniel Geale in the third round in July.

“I think he’s a top fighter. He’s crushed everybody he’s been in with, but I’ve got the tools to beat any middleweight out there,” said Murray, who battled to a draw with ex-titleholder Felix Sturm in December 2011.

“I wouldn’t be taking the fight if I didn’t think I could win. A lot of his opponents have gone into the fight already beat. You won’t get that with me. I’m gonna go in there and stand up to him.”

“It doesn’t get better than coming back to Monte Carlo,” said Loeffler. “The atmosphere is electric and Gennady enjoys it. He makes every fight an exciting fight because of his style. Every opponent has a plan until they feel Gennady’s first punch.”

Prior to facing Geale, Golovkin knocked out Matthew Macklin in the third round in June 2013, and Curtis Stevens in the eighth round last November.

“It feels great to get this fight. Murray is a great fighter, very strong. I remember the Sergio Martinez bout. It was an amazing fight. Along with Matthew Macklin and Daniel Geale, Murray is one of the best pure boxers in the division,” said Golovkin.

“I like to test myself. I’m giving him a chance, and for Europe, this is the biggest fight in the middleweight division. It is important to fight here, where many of my fans and followers are.”

“I have the highest regard for Golovkin, but the truth is his opponents have been sitting ducks. Out of fear, they lose the fight before they step into the ring. They’re intimidated and scared,” said Berman.

“You look at Murray’s background and just know he won’t be coward. He’s the first guy I’ve seen who will create angles, who won’t stand in front of Golovkin waiting to be hit. Murray will make Golovkin work. He has the ability to outhustle him.”

Lightweight Darleys Perez (31-1, 20 KOs) scored a sixth round knockout over Jaider Parra (23-2-1, 12 KOs) on Friday at the Coliseo Universidad Del Norte in Barraquilla, Colombia, according to a press release from Gary Shaw.

“I wanted to make a statement and show my people of Colombia that I’m for real. In the early rounds, I was feeling him out and then started to get into a rhythm. That’s when my punches started to land more cleanly,” said Perez, 31, the mandatory challenger to WBA beltholder Richard Abril.

“After the fifth round, I knew he wouldn’t last much longer. In the sixth round, I finally ended the bout with a nice body shot. I’m ready to fight Abril for the championship. My promoters Gary Shaw and Thompson boxing said they are working hard to get me that fight. I can’t wait.”

Parra, 31, had won three straight, two by knockout, since losing by fifth-round stoppage in May 2013 to RING No. 1-rated junior lightweight Takashi Uchiyama, the WBA’s 130-pound titleholder.