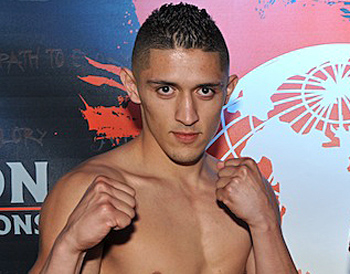 ONTARIO, California – Junior welterweight prospect Giovani Santillan was in the ring against a crafty and hard-hitting fighter on Friday.

While the going got tough at times, the San Diego native remained composed and controlled the action to win a workmanlike eight-round unanimous decision over Luis Solis at the Doubletree Hotel.

Solis (14-5-4, 12 KOs), who entered Friday’s bout having lost two close decisions to prospect Jose Roman and veteran Miguel Angel Huerta, was the first real puncher on paper Santillan had faced. However, Santillan was never hurt as he controlled the majority of rounds with pinpoint accuracy and effective ring generalship.

In the middle rounds, Solis attempted to rally, taking the fight to the southpaw and attempting to back him up. Undaunted, Santillan thwarted that rally by landing overhand left crosses to the head.

As the bout progressed, the Yucatan, Mexico native was reduced to trying to land one big punch. Anytime he did mount an offense, Santillan kept him honest, connecting to the body or head.

In the co-main event, Isaac Zarate won an eight-round unanimous decision over Fernando Samanirgo. All three judges scored the bout 79-73 in favor of Zarate (9-1-1, 1 KO).

The southpaw controlled the first three rounds by simply outlanding and outboxing Samaniego (6-1-1, 3 KOs) during those frames.

Samaniego was able to repeatedly land right hands to the head of Zarate during the middle rounds, at times snapping Zarate’s head back. Zarate tried to time Samaniego as he came in, but Samaniego would beat him to the punch or wisely tie him up.

Both fighters had their moments in the final two rounds, although it looked as though Zarate landed the more-telling blows.

– Featherweight Fernando Fuentes (5-3, 1 KO) rallied to stop Erick Aguirre in the sixth and final round. After Aguirre built an early lead, Fuentes dropped him in the third round. Fuentes applied the pressure in the final two rounds, hurting Aguirre on a number of occasions until referee Ray Corona stopped the bout at 1:59.

– In a bout featuring Mexican flyweights, Francisco Lapizco (7-0, 2 KOs) won a hard-fought four round unanimous decision over Cesar Sustaita. Lapizco was dropped with a left hook to the head in the first round, but dropped Sustaita (3-1, 3 KOs) with a left hook of his own in the second. All three judges scored the bout 38-36 in favor of Lapizco.

Francisco A. Salazar has written for RingTV since October of 2013 and has covered boxing in Southern California and abroad since 2000. Salazar also covers boxing for the Ventura County (CA) Star newspaper, RingTV, and Knockout Nation. He can be reached by email at [email protected] or on Twitter at FSalazarBoxing