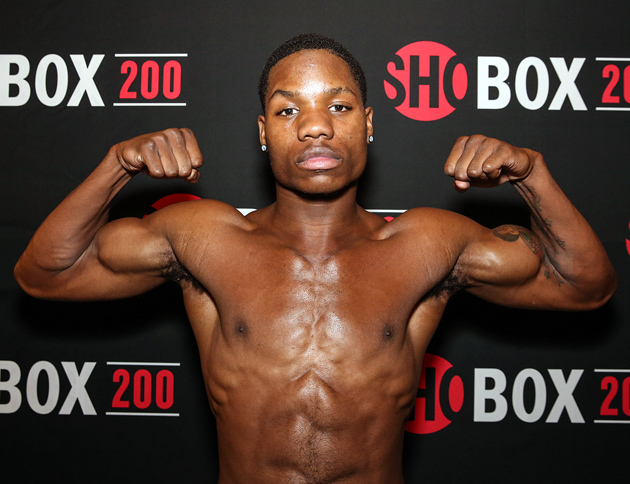 Best night of pro career: Douglas claims his best win was his first fight of 2014.

“My best performance would be when I fought Marquis Davis on Showtime,” Douglas told RingTV.com at the Underground Gym in Brooklyn, New York. “I fought the fight before the co-main event and I knocked his tooth out.”

The then-21 year old would go on to win a unanimous eight-round decision over Davis, shutting out his opponent on two of the cards.

He also feels he made an impression when he stopped former world title challenger Luca Messi several months back.

“It was a great fight for me,” he said. “Even better victory, stopping him in two rounds. Everything was great, everything was on point.

Worst night of pro career: The only blemish on “Action” Douglas’ resume was against the once-beaten Michel Soro in July. Unsurprisingly, he considers that to be his weakest performance as a pro.

The fight headlined the 200th episode of “ShoBox: The New Generation,” and it took place at catchweight. Douglas came in at 155 pounds, the lightest of his career.

“It was a learning process for me,” said Douglas. “I learned what weight I should be at, which is what I was already comfortable at which is 160. I dropped down to 155, which was a weight I’d maybe not got to in four years.

“I thought I was OK but my body was weak and the wear and tear started to grab hold of me in the fight; that was a big lesson.”

His uncle Kay Koroma is also his trainer. The two share a very close relationship.

“He started off great, (but) just the simple fact (of) him being that low (in weight hampered his performance); he didn’t rehydrate right.”

Next fight: Douglas returns to action for the first time since the draw with Soro when he faces hard-nosed Mexican journeyman Jose Medina (18-15-1, 7 KO’s) on Friday in Somerset, New Jersey.

Medina is known for his durability having only been stopped twice earlier in his career. It would appear a good fight for Douglas to get back to winning ways and also get some rounds in.

“I’m ready to get back,” he said. “I feel like I’ve got to redeem myself. I’m still undefeated and I didn’t take a loss, a lot of people think I won that fight (against Soro), I still feel I have to redeem myself.”

Douglas would like the opportunity to fight Soro a second time, but isn’t sure that it is on the immediate agenda.

“We would like a rematch,” he said, “but word flying around we heard they weren’t ready to take a rematch, so I’m ready to move on and go forward.”

Koroma believes people look at the records of his nephew’s opponents and think it’s a walk in the park for the youngster, it’s not something he agree’s with.

“People look at numbers (of Douglas opponents) and say this guy can’t fight,” said Koroma. “But it’s the performance level when you’re actually in the ring with that opponent.

“Nobody has come in and tried to lay down for him, which makes it tougher for us and better for us because they push him.”

Why he’s a prospect: Douglas had a successful amateur career, winning the national PAL tournament in 2006 (as a junior) and silver in the seniors in 2011, the Ringside tournament in 2009, as well as the Junior Olympics in 2009. He won bronze at the national Golden Gloves and USA Championships. Douglas represented the U.S. in the World Cup in Russia.

The most noteworthy names Douglas fought in the amateurs were 2012 Olympian Errol Spence Jr., who beat him in the PAL tournament, and Jesse Hart who he lost to in the Olympic trials and also the Golden Gloves.

Koroma says his nephew never got the opportunity to show his true potential in the amateurs because he was injured.

“He had an injury and when he came back from the injury he was in a rush position,” added Koroma. “We couldn’t really teach him more, trying to get our position, get to the nationals, get ranked; he’d missed so much and he was behind and we were trying to get into the Olympic trials.

“Now as a professional we’ve stopped and slowed down and taught him; sometimes he may not do exactly what we want but in a fight he sees it.”

He’s also worked with current lineal super middleweight champion Andre Ward, sparring in the region of 60 rounds. Whilst in camp with Ward, Douglas also shared the ring with Amir Khan.

“I went into camp with Andre Ward and Amir Khan to prepare for one of my fights awhile back,” said Douglas. “It was very technical (sparring with Andre Ward), very informative. I enjoyed it.

“What I took from sparring was how he didn’t waste any movement, all his movements were a set up, everything he did was very precise. He was complete in the ring. Amir Khan, he boxed a lot, he let his hands go a lot; I enjoyed that sparring with a lighter, faster guy”

Recently he worked with Sam Soliman to help prepare him for an ultimately unsuccessful title defense against Jermain Taylor, doing 12 rounds with the Australian.

Douglas has stayed very active, fighting 15 times in the first two years as a pro.

“I like to be active,” he said. “I like to stay active to stay sharp and to keep moving, you can’t get to where you want to be by standing still, waiting around.

“All credit goes to my promoter GH3, they’ve been able to keep me moving and moving the right way and getting me the proper exposure.”

His promoter, GH3 Promotions, aren’t afraid to match fighters tough early on. It’s for the betterment of the fighter says Vito Mielnicki.

“When we sign fighters at GH3 Promotions, I basically sign a thoroughbred, where it has a pedigree,” said Mielnicki. “I think he’s fairly young and when we move him we do it the proper way, meaning step up fights. There’s no reason to take easy fights when you’re looking to build a superstar.”

Why he’s a suspect: Like all young fighters he has to prove several things before we know if he has what it takes to become a world class performer.

Douglas feels he needs more experience which will come from staying active.

“Just being more comfortable and being myself in the ring; there’s a lot of times where as fighters you can look at other fighters and forget what you came to do and you lose your rhythm in the ring.”

He feels he needs to iron out a few creases in his technical game.

“Keeping my left hand up, it’s a long-time bad habit that I have,” said Douglas who’s never been down. “Correcting all mistakes all over, you never stop learning.”
Koroma sees Douglas every day in training and says that with experience Douglas will develop into a more rounded performer.

“A world class performer to me is being consistent and believing what you’re doing,” said Koroma. “If you believe in your jab, you have to believe in it all the way, you can’t have doubt, because if you do you’ll get caught.

“To iron out the wrinkles, is getting into his mind if this fight is boring but something is working keep doing it to get the ‘W’, keep using your jab, don’t get in a war if you don’t have to, don’t stand in front of opponents.”

Douglas regularly watches the next generation at the gym, it’s something he’s able to learn from according to Koroma.

“They do things, he wishes he could do, it helps him, it makes him think he’s gonna try that out,” said Koroma. “The kids we have in our gym they’re all ranked number one, they travel overseas and fight on the USA team because they’re at a level he was at but they’re higher because they’re having a longer career in the amateurs.”

Story lines: Douglas grew up in Washington D.C., the product of a broken home. He moved around various foster homes in his early years.

“I come from a troubled childhood, born prematurely to a drug addicted mother,” said Douglas. “They told my mom I wouldn’t grow to be a fully functional human, I wouldn’t be able to walk, talk, move or speak.

“I passed that and from then ’till the age of three my mom was still running the streets, doing what she wanted to do.

“She knew the predicament she was in was not what she wanted me and my older siblings to grow up in. She took us to our aunt’s house. She wanted to give us a better chance as she knew she wasn’t doing to good.”

He didn’t see much of his father, who flitted in and out of his life.

“He didn’t know what was going on to much,” said Douglas. “Once my mom had given us up to my aunt he didn’t know. He asked the family, the family didn’t really deal with him. So when he finally found us, he tried to support us as much as he could.”

Douglas eventually entered the foster care system. It was during that time that he first came into contact with boxing at age 10.

“I found boxing and it became a home to me,” he said. “A safe haven and I stuck with it and it’s taken me here and I plan to take much further than this.”

When his uncle entered his life in his late teens he was able to help Douglas graduate from high school with honors, as well as moving quickly in the boxing world. Douglas hopes to further his education one day by going to a four-year university.
“My older siblings didn’t have much education, they had to work a 9-to-5 job or no job at all, trying to hustle the street,” he said. “Going to school I knew I had to be different so I strived hard to better myself and get an education.

“My plan is (to do so) when I’m financially set, so I don’t have the stresses of loans or having to pay debts then I’ll go to school. I don’t have to work an extra job.”
Douglas seems mentally mature beyond his 22 years because of his tough upbringing.
Despite all the hardships he’s had to endure, he remains positive.

“Throughout my youth I spent time in foster care,” said the well rounded Douglas. “My family not being there, some would say I lived a life that was hard but it makes us who we are. God only gives us what we can handle. I look at it all as a test. It made me who I am.”