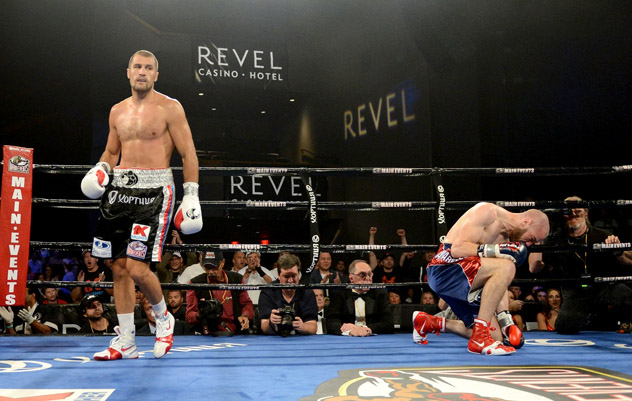 WBO light heavyweight titleholder Sergey Kovalev has a new source of motivation heading into his Nov. 8 bout with IBF and WBA counterpart Bernard Hopkins at Boardwalk Hall in Atlantic City.

Kovalev’s wife, Natalia gave birth to their son, Aleksandr on Monday morning in Los Angeles, the boxer’s promoter, Main Events’ CEO Kathy Duva, announced during a Tuesday conference call. Weighing in at eight pounds and eight ounces, Aleksandr was named after his paternal grandfather, according to Duva.

“Nov. 8 is one more fight that I’m going to win and give this victory to my son, Aleksandr…this is for me, a huge fight. This is the biggest fight of all of my life. It’s a very important fight,” said Kovalev, 31.

“Am I focused for this? Yes. My baby was born yesterday and I will always remember this. My son has pushed me more and it’s a big motivation for me. Now I understand for who I am doing everything in my career. I’m doing this not just for me but I’m doing this also for my family.”

Kovalev (25-0-1, 23 KOs) registered a second-round knockout of Blake Caparello in his last fight in August at the Revel Resort in Atlantic City, rising from a first-round knockdown to score two of his own.

In victory over Caparello, Kovalev earned his 13th knockout in 14 fights, including a fourth-round stoppage that dethroned previously unbeaten WBO beltholder Nathan Cleverly in August 2013.

Although confident of victory in what he considers to be a dream opportunity, Kovalev fully acknowledged that Hopkins (55-6-2, 32 KOs), who turns 50 on Jan. 15, recognized the monumental task before him.

The moment, said Kovalev, has been a long time coming.

“You never know what there will be tomorrow but if you believe in it, it can happen. You’ve trusted and believed in yourself and you have a goal and yes, this can happen. You push more and you do more and your dream can become fulfilled if you believe in your heart and you push yourself. Four years ago, we were going all over the country and were fighting everyone who was available,” said Kovalev.

“At the time, you think that getting a fight like this was impossible. But I believed and I came to do it and I tried to do it. I’ve waited a long time to get to this level for this fight and it’s a big fight. When I was a child, I had the dream. I would watch television and I had a dream. I wanted to be there and I’m here. If you want it, you can do it.”

Already the oldest man to win a major boxing title, Hopkins first set the record at the age of 46 by outpointing Jean Pascal for the WBC’s title in May 2011 before being dethroned via majority decision loss to Chad Dawson in April of 2012.

In his most recent fight in April, Hopkins also became the oldest fighter to unify a pair of titles with a unanimous decision over Beibut Shumenov. In that fight, Hopkins dropped Shumenov in the 11th round, adding the latter’s WBA belt to the IBF title he already owned.

In his previous bout in October 2013, Hopkins unanimously decisioned Karo Murat in defense of the IBF belt he won by unanimous decision over previously unbeaten Tavoris Cloud in March 2013. The win over Cloud extended his record.

Adding intrigue is the fact that Kovalev’s cornerman, John David Jackson has shared the ring with Hopkins, sparred with him and served as an assistant in his corner.

Jackson was knocked out by Hopkins in the seventh round in April 1997 during Hopkins’ run toward a record 20 defenses of his undisputed middleweight title. Jackson later worked alongside Hopkins’ trainer, Naazim Richardson, from 2006 through 2010.

Kovalev was tight-lipped regarding Jackson’s “strategy” against Hopkins, other than that it involves making “a street fight” of the bout.

“The most important thing for me is to just keep going and to stay motivated. To stay disciplined and to keep working on some special combinations. John says there is nothing dangerous from Hopkins because Hopkins is already old. We’ll just keep going and keep doing what we’ve been doing for every other fighter,” said Kovalev.

Note: Duva said that instant replay will be used for Hopkins-Kovalev, adding that the New Jersey State Athletic Control Board is “working with HBO to mechanically implement that…it’s up to the New Jersey commission with its new commissioner, Larry Hazzard, to make those pronouncements. But I’m told that this is going to happen, so we’re all very happy about that.”