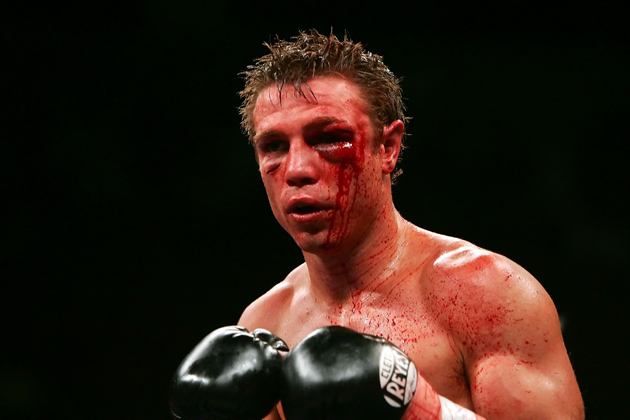 Lightweight contender Kevin Mitchell still was undefeated in May 2010, when he suffered a third-round knockout at the hands of hard-hitting Michael Katsidis.

Four years later, the hammer-fisted Katsidis (30-6, 24 KOs) will face Tommy Coyle (19-2, 8 KOs) on Saturday at the Hull Ice Arena in Hull, England in support of a a lightweight bout between Olympic gold medalist Luke Campbell and Daniel Eduardo Brizuela.

Since facing Mitchell, Katsidis, 34, has endured four more losses, one being a ninth-round stoppage loss to Juan Manuel Marquez. Katsidis has also retired and then unretired.

Yet when Katsidis enters the ring against Coyle, a man nine years his junior, Mitchell believes he will be as dangerous as ever.

“I don’t think Michael is what he was when he fought me but if you stand in front of him and let him let his hands go, he can do a job and he could knock Tommy out,” said Mitchell.

“Since he boxed me, he has proved he can mix it very well at world level. He has had many wars but I can see him getting an early finish if Coyle isn’t sensible. I think it will be another war. If Tommy does what he normally does, then I think he could get knocked out in the first four or five rounds.”

Katsidis had announced his retirement in February of 2013 but returned last March with a third-round stoppage of Eddy Comaro followed by a unanimous decision over Graham Earl in July.

Nicknamed “The Great” and known for his warrior style, Katsidis had been out of action since April 2012 when he lost by majority decision to Albert Mensah.

Coyle has won four straight bouts, one by stoppage since being stopped in the 10th round by Derry Matthews in July 2013.

Coyle’s other loss was by decision to Gary Sykes in October 2012, after which he scored two knockouts before facing Matthews.

Coyle, 25, is coming off a unanimous decision over Michael Ansah in May that followed a 12th round stoppage win over Brizuela in February.

“If Michael wins, it will be because Tommy stands his ground and walks into one of Michael’s dangerous body shots or head shots. Once Michael lands those shots and knows that he has hurt you, he isn’t one of those fighters like Brizuela who couldn’t capitalize. Michael will finish the job,” said Mitchell.

“If Tommy uses his head and uses plenty of foot movement, uses the ring well, keeps out of his way and keeps it to strict boxing, keep on his toes, hands nice and high and be aware, then I think Coyle can get the job done on points. I think if he stands there and tries to have a go at [Katsidis], then I think you’ll find Coyle walks into one and he’ll go over. Coyle will have worked on that, 100 percent.”

Note: Quotes taken from a release from Matchroom Sport.