Sharif Bogere: ‘I’m a hungrier lion than ever before’ 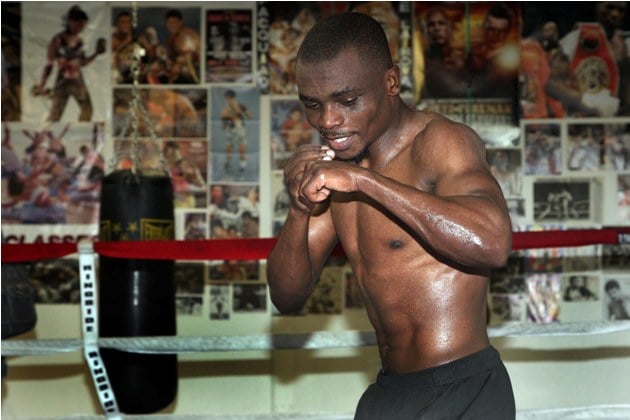 Sharif Bogere is on a mission and the lightweight contender’s past five victories – all knockouts – indicate that.

Only one adversary during that run has gone into the sixth round before being stopped by Bogere, with the other four lasting three rounds or less.

“I’m grateful to God for the experience that I’m getting in the sport of boxing,” said Bogere, 26, “but right now, I just feel great and I’m ready to get back in there and to continue to beat these guys up.”

Bogere (25-1, 17 knockouts) will be after his third straight victory when he meets Fernando Garcia (29-6-2, 18 KOs) on Oct. 30. The bout will be hosted at the Plymouth Memorial Hall in Plymouth, Mass on a “Golden Boy Live!” show on FOX Sports 1 and FOX Deportes.

“This guy has got a lot of experience. He’s got 29 wins, so I’m going to have to take this guy really seriously,” said Bogere. “If I look good in this fight, then I’m ready to get right back in there. That’s where I belong. I belong in there with the top guys. I need to get a belt.”

Nicknamed “The Lion,” Bogere is looking to regain status lost in the 135-pound division since falling by unanimous decision to WBA beltholder Richar Abril in March 2013.

“For that fight, I was in good shape. I did what I did and I tried to win and I thought that I won the fight. But the judges saw the fight differently,” said Bogere, who is coming off a third-round stoppage of Miguel Zamudio in June.

Bogere was out of action for 11 months after facing Abril, returning to the ring with a sixth-round knockout of Arturo Urena in April before defeating Zamudio.

“As for the layoff, I had an Achilles tendon injury. I couldn’t go running or anything like that. I did a lot of physical therapy and that really helped me a lot. I feel like way better than I ever have before and I’m ready to take these guys to school and to beat them up,” said Bogere.

“As far as my fights, you know, I don’t like to leave it in the hands of the judges. I am going to go out there and if I see an opening, then I’m going to go for the kill. I’m going to go in there like a true lion does and that’s to take care of business. I’m a hungrier lion than ever before.”

RING No. 1-rated Terence Crawford, No. 3-rated Omar Figueroa and No. 5-rated Mickey Bey are the WBO, WBC and IBF beltholders, respectively. Abril, rated No. 4, holds the WBA title.

“Right now, everybody likes the WBC belt. It’s the one they want to go after. I think that Omar Figueroa is going to move up in weight, so it looks like that belt is going to be vacant,” said Bogere.