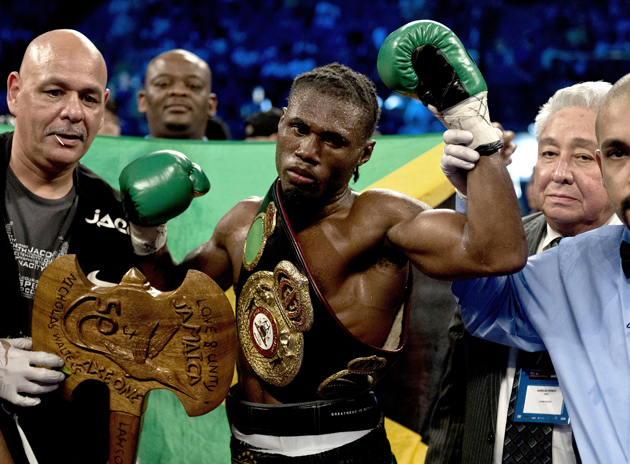 Undefeated featherweight contender Nicholas Walters scored the biggest victory of his career by stopping four-division titleholder Nonito Donaire in Round 6 of their WBA title bout on the Gennady Golovkin-Marco Antonio Rubio undercard on Saturday at StubHub Center in Carson, California.

Walters (25-0, 21 knockouts), of Montego Bay, Jamaica, overcame a fast start from Donaire, the defending titleholder, who moved well and landed crisp left hands in the first two rounds of the HBO-televised bout. Walters was rocked a bit at the end of Round 2.

However, the 28-year-old boxer-puncher took over the fight in Round 3 by dropping Donaire (33-3, 21 KOs) with an uppercut and then stalking the 31-year-old veteran behind a hard jab. The right side of Donaire’s face was cut, puffy and reddened from the jabs by the end of Round 4 and the Filipino star began to stand and trade more with the bigger, stronger, younger fighter, who often pressed him to the ropes.

Near the end of Round 6, Donaire tried to connect with a big left hook, but missed and took an even bigger right hand to the top of his head. The cross dropped Donaire face down to the canvas. He got up at referee Raul Caiz Jr’s count of 8 or 9, but he was in no condition to continue and the fight was waved off at 2:59 of the round.

“He knocked the s___ out of me,” Donaire admitted during his post-fight interview. “He’s an amazing fighter. I was at my best. I never, ever trained as hard as I did for this fight. The size he had over me overwhelmed me. I couldn’t move. He was overwhelming in that ring.”

A full ringside report will posted shortly by Michael Rosenthal.