Edner Cherry refuses to go away 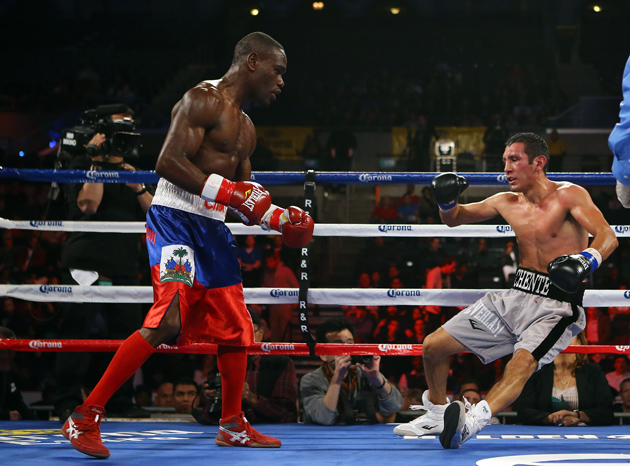 Vicente Escobedo is knocked down (and was later knocked out) by Edner Cherry in the sixth round of their junior lightweight bout on Feb. 16, 2013 in Atlantic City, New Jersey. Photo by Al Bello/Golden Boy/Getty Images

PHILADELPHIA, Pa. – Edner Cherry is one of those fighters that just won’t go away. Just when you think he’s out of the boxing loop, settling into his next phase in life, he resurfaces. He has that clingy presence that refuses to go away.

Easy. Cherry, the 13-year veteran who was once a junior welterweight contender, still believes that a title shot is in his future. He’s 32 and his last meaningful win was against Stevie Johnston in May 2008, which set up a fight against a rising Timothy Bradley (who defended his WBC 140-pound title with a unanimous decision victory over Cherry in Sept. 2008, Cherry’s last loss).

But on Saturday night, on NBC Sports Net’s “Fight Night” from the 2300 Arena in South Philadelphia, Cherry is going to continue pushing, taking on Osumanu Akaba (31-6-1, 24 knockouts) in a 10-round junior lightweight bout.

It will mark the second time this year Cherry (32-6-2, 16 KOs) is fighting and the third overall in the last two years that he’s stepped into the ring.

In Cherry’s mind, it’s another step toward bigger things.

“The world will see Edner Cherry again, and people will see me working toward another title fight and boxing will see that I am back,” Cherry said. “I had some issues, some managerial things and some other stuff that was keeping me on the shelf. I have been in some wars, but I still feel fresh and I’m not beat down like some fighters who have had less fights, but taken more beatings.”

Cherry will be riding an eight-win winning streak into Saturday night, which includes a first-round, no-contest against Eric Aiken. He says he’s kept himself in shape and motivated. He has a new trainer, Dan Birmingham, and he credits his wife and children for keeping him going.

“I know what I’m fighting for Saturday night, it’s not about just collecting a paycheck,” Cherry said. “I do think I have reached a point where I cannot lose, and every fight is important to me. I don’t care who they put in front of me, I cannot take any fight lightly. It’s why I’m staying in shape and staying focused between fights. I have family to take care of. Boxing is my job, and I don’t want to be the guy that they call at the last second for fights.”

Akaba, 34, had a nine-knockout streak and 10-fight winning streak overall stopped in his last bout to 17-1 Bahodir Mamadjonov in an eight-round decision. Cherry says he doesn’t know much about him, other than he’s from Ghana, and carries a little power.

The Mamadjonov loss was Akaba’s only fight in the United States. He’s only been stopped once.

In preparing for the fight, Cherry said he sparred with middleweights to ready himself for Akaba’s big punch.

Cherry plans on sticking around – even if he losses. He’s shown a remarkable capacity for rebounding. Whether or not he will this time remains a question.

“This is a fight about making the right moves,” Cherry said. “I know Dan will tell me what I’m doing wrong. I’ll be able to handle anything he throws at me. I know the kind of shape I have to be in when I fight. That hasn’t always been the case.

“I want to be 100-percent every time, but you know what, if I lose, I’ll tell you right now, you will hear from me again. You look at my losses, Bradley, Paulie Malignaggi, Jose Santa Cruz. I came right back. I’m still looking for that world title to wrap around my waist. It’s my goal and it’s always been my goal. And I’m not giving up.”