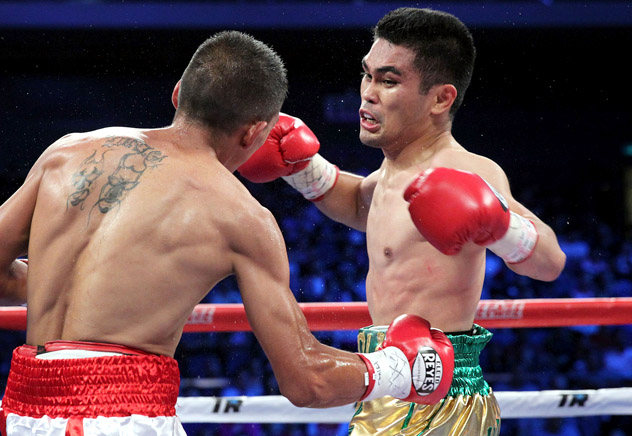 RING No. 2-rated flyweight Brian Viloria is among boxing’s most exciting fighters, as are undefeated RING champion Roman Gonzalez and RING No. 1-rated Juan Francisco Estrada, who lost via unanimous decision to Gonzalez and defeated Viloria by split decision.

Gary Gittelsohn manages Viloria (34-4, 20 knockouts), a former junior flyweight and flyweight titleholder, and would most like to get Estrada (30-2, 22 KOs) to face his fighter yet again. The 24-year-old Estrada’s win dethroned Viloria as WBA and WBO 112-pound titleholder in April 2013.

Estrada has made three defenses since defeating Viloria, including last month’s 11th-round knockout of ex-beltholder Giovani Segura. In victory over Viloria, Estrada bounced back from his unanimous decision loss to Gonzalez in November 2012.

A Filipino-American from Hawaii, Viloria has won two straight, comprised of a unanimous decision over Juan Herrera in March and a fifth-round knockout of Jose Alfredo Zuniga in July.

“But Estrada has avoided Brian because I think he thinks that his pot of gold is a rematch with Roman Gonzalez. Whoever is advising him is filling his head that there is somehow a $1 million purse available for him to fight that fight, notwithstanding the fact that no American television is interested in it.”

In the meantime, Gittelsohn said Viloria is scheduled for an appearance on a Dec. 6 Top Rank Promotions card in Glendale, California, against an opponent to be determined with the long-range goal of perhaps matching him with two-time Chinese Olympic gold medalist Zou Shiming.

Should he be victorious in December, Viloria could appear on a Feb. 14 card in Macao, China.

“Top Rank and I have an agreement to keep Brian busy, so that will be a small stay-busy fight in Glendale, Calif.,” said Gittelsohn of Viloria, 33. “So he’ll fight on Dec. 6 and then come right back on that Feb. 14 card in Macao. That will be a more meaningful fight but we don’t yet have an opponent. That could be a will be a decent test anyway.”

Zou has a bout against Thailand’s Kwanpichit OnesongchaiGym (also known as Kwanpichit 13 Rien Express) on the Nov. 22 Manny Pacquiao-Chris Algieri card in Macao. If successful, Zou, 33, could be in a Feb. 14 bout opposite RING No. 6-rated Amnat Ruenroeng, the IBF’s beltholder. Plans beyond that involve Viloria against Shiming likely in Macao.

“Bob Arum has a serious investment in Zou Shiming and that Macao venue and Zou is in the same weight class as Brian. I believe that Bob has the IBF champion, Ruenroeng sort of lined up as a potential fight for either Zou or Brian,” said Gittelsohn.

Eventually, Gittelsohn would like to see the 112-pound division receive American-based network attention from the likes of HBO, Showtime and ESPN.

“ESPN has featured Brian prominently through the years. Brian has put on a lot of great fights on ESPN. The problem has always been cracking into the premium cable networks. Look, the truth is that the flyweight division is the most talent-laden division in boxing,” said Gittelsohn.

“It’s a crime that kids like Brian Viloria and Roman Gonzalez and Segura, all of whom have made great fights against each other, have not been televised on premium cable here in the United States. They’ve been in barnburner fights that should be on those networks.”

MICHAEL KATSIDIS: ‘I STILL HAVE PLENTY LEFT TO OFFER’

Former lightweight title challenger Michael Katsidis (30-6, 24 KOs) plans “to prove that I still have plenty left to offer” in pursuit of his third straight victory in as many fights this year when he meets Tommy Coyle (19-2, 8 KOs) in a lightweight bout on Oct. 25 at the Ice Arena in Hull, Yorkshire, England.

“I’m here to prove that I still have plenty left to offer and there will be no questioning my future after Hull,” said Katsidis, 34, in a release from Eddie Hearn of Matchroom Sport.

“I’ve been over here for a while, settling in, getting comfortable in his backyard and ready to perform at my best on the night. I don’t know much about Tommy but I know that he is in for a tough night on Oct. 25.”

Katsidis had announced his retirement in February 2013 but returned last March with a third-round stoppage of Eddy Comaro, followed by a unanimous decision over Graham Earl in July.

Coyle, 25, has won four straight bouts, two by stoppage since being knocked out in the 10th round by Derry Matthews in July 2013.
Coyle is coming off unanimous decision over Michael Ansah in May that followed a 12th round stoppage win over Daniel Eduardo Bizuela in February.

Prior to facing Comaro, Katsidis had been out of action since April 2012 when he lost by majority decision to Albert Mensah.

Katsidis had earned interim WBO belts with a fifth round stoppage over Earl in February 2007 and a split decision over Vicente Escobedo in September 2009.

Junior featherweight prospect Jessie Magdaleno (19-0, 15 KOs), 22, has pulled out of a scheduled Oct. 25 fight with Erik Ruiz (13-1, 6 KOs) as a result of a break in into his Las Vegas home, according to his manager Frank Espinoza.

“He was training here in Indio, Calif.,” said Espinoza, in a story that was originally reported by BoxingScene.com. “He got a call that said they took everything. They took furniture.”

Also on the card is heavyweight hopeful Andy Ruiz, who will pursue his ninth straight stoppage win against Kenny Lemos.

Proceeds from the event, entitled “Fight For Water 3,” benefit farm workers and farmers who have been adversely affected by California’s historical drought that has depleted water supplies.

Espinoza said that he is hopeful that Magdaleno returns on the Dec. 13 undercard of a welterweight bout between two-division titlist Tim Bradley and Diego Chaves.