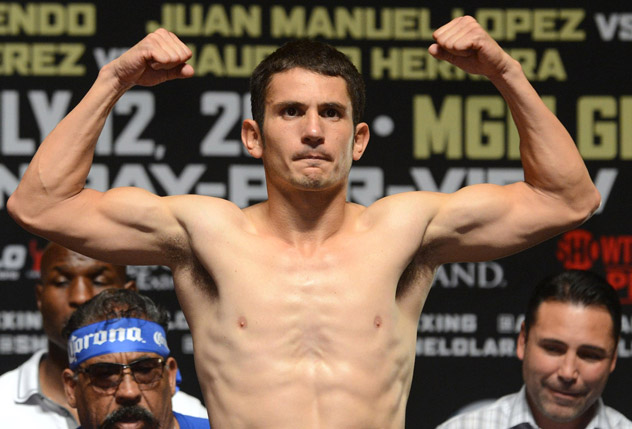 Although Mauricio Herrera’s nickname is “El Maestro” for his creativity and ring savvy, the veteran junior welterweight plans to be more of a shark in his Dec. 13 fight with unbeaten Jose Benavidez Jr., whom he hopes to take into the deep waters before devouring him.

The seasoned Herrera (21-4, 7 knockouts) will be in his third fight of 2014 against Benavidez (21-0, 15 KOs) in support of a main event featuring Tim Bradley against Diego Chaves at the StubHub Center in Carson, Calif., on HBO.

“The thing that I like about this is that with a lot of these young fighters, they lack patience, so I like to test their patience. They can get frustrated easily because they’re young-minded and they can’t handle it. So they get easily frustrated like Danny Garcia, for instance. A lot of that can wind up playing its way into the fight.”

Benavidez, 22, has not gone further than eight rounds in a fight.

“I’ve gone the distance in a lot of my fights. I’ve got almost 200 rounds in my career and I think that Benavidez has less than half of that,” said Herrera. “I’m comfortable and even used to going the distance. So I’ll try to make him uncomfortable and we’ll see if he has what it takes.”

“I’ve done well with all of the guys that I’ve fought, even the ones that I’ve lost to. I’ve either gotten robbed or the fights were close and could have gone either way. So I’m not an easy guy to fight,” said Herrera, who is training at the Capital Punishment Gym in Riverside, Calif.

“Benavidez is a young guy and I think I’m going to be his first real test. I think that I’m a smarter fighter who has fought a lot of different styles when you look at my record and the guys that I’ve fought. I’m older but I’m wiser and more experienced and I feel like I have a lot of advantages over this guy.”

Herrera even dismisses any notion of a height disadvantage, standing 5-foot-7 and-a-half compared to the listed 5-foot-11 for Benavidez.

Herrera is happy to be part of a card whose main event features Bradley and Chaves in a welterweight fight between two men trying to rebound from losses.

“This has been a great year and a busy year for me as far as the exposure, so we’re on our way,” said Herrera, who faced Perez in support of a Canelo Alvarez’s split decision over Erislandy Lara at the MGM Grand in Las Vegas.

“I was one of the first television fights on that card and we did pretty good. I thought that we put on one of the best fights that night. So big things have been coming my way, so this is another big shot for me and I’m going to take full advantage of it.”

In victory over Benavidez, Herrera said he might consider a rise into the welterweight division.

“I’ve actually been thinking about going up to 147. There are still a lot of good fights at 140 but a lot of the guys that I want to fight are also moving up, like Danny Garcia is moving up and Amir Khan is up at 147,” said Herrera.

“There are a couple others that I can’t recall right now. So 147, I wouldn’t mind going up. I’m not afraid to try out that weight. They’re not that much bigger at 147. I’ll fight a couple of other fights at 140 or so and then, if I can find the right fights up at 147, then I’ll move up and take it.”

A potential third bout on the Bradley-Chaves card could match southpaws Matt Korobov and Andy Lee for the WBO’s middleweight belt vacated by Peter Quillin.