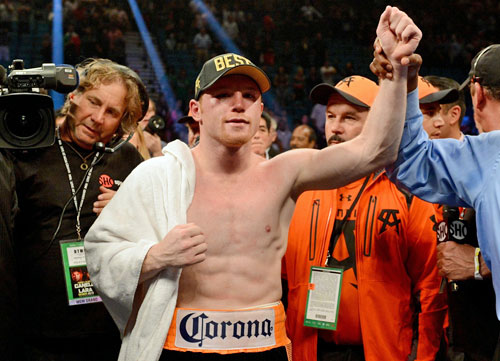 “Due to a persistent ankle injury, Canelo Alvarez must withdraw from his December 6 bout,” read a statement from Golden Boy Promotions. “He thanks his fans for their support and looks forward to big things in 2015 on HBO. Golden Boy Promotions and HBO are reviewing their options for the Dec. 6 date.”

Alvarez left Showtime last month after signing a long-term deal with HBO, and is coming off consecutive victories by 10th-round knockout over Alfredo Angulo in March and by split decision over Erislandy Lara in July.

“It’s a muscle strain that he’s had for a while now, and it happened way before the Lara fight,” De La Hoya told RingTV.com on Monday. “He knows that 2015 is going to be a huge year for him, so he wants to take care of it right now.”

Although Alvarez-Clottey was to be televised on HBO from Minute Maid Park in Houston, Texas, Clottey (38-4, 22 knockouts) is now doubtful as an opponent for Alvarez (44-1-1, 31 KOs), who plans to return to action on May 2, 2015 — representing the traditional Mexican holiday of the Cinco de Mayo weekend.

Floyd Mayweather Jr., who is with Showtime, traditionally competes on the weekends of Mexican holidays Cinco de Mayo and Mexican Independence Day in May and September.

Blocked from those dates while at Showtime, Alvarez said he intends to regain the dates that he feels belong to his Mexican countrymen.

In order to compete with Mayweather, De La Hoya said he will pursue as a potential May opponent either RING middleweight champion Miguel Cotto of Puerto Rico or former WBC 160-pound titleholder Julio Cesar Chavez Jr., another Mexican star.

“I’m going to be talking to the team over the next couple of days, but, obviously, Cinco de Mayo is the date that Canelo wants to fight on, so, obviously, there has to be a huge name, so we will see,” said De La Hoya. “Look, there are two options out there that Canelo is considering, and those are Julio Cesar Chavez, which is very, very possible, and Miguel Cotto, which is another fight that is very, very possible.”

Prior to facing Angulo, Alvarez was dethroned as RING and WBC 154-pound champion following a majority decision loss to Mayweather in September 2013.

Mayweather-Alvarez was the highest-grossing boxing event of all time with nearly $150 million in revenue reported, eclipsing the $136 million earned by Mayweather’s 2007 victory over De La Hoya.