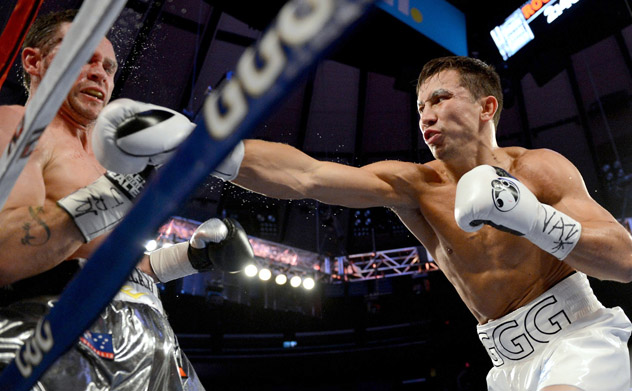 Marco Antonio Rubio will not last beyond five rounds against Gennady Golovkin, according to Golovkin’s trainer, Abel Sanchez

Sanchez expects Golovkin to score his 18th straight knockout victory against Rubio during the 12th defense of his WBA middleweight belt on Oct. 18 at the StubHub Center in Carson, Calif.

“Gennady Golovkin will get his 18th straight knockout on the 18th,” said Sanchez, from his facility in Big Bear, Calif., where he and his fighter have been training since mid-August. “We’re still in Big Bear. We won’t be coming down until probably next week, like Tuesday or Wednesday…I think that it will take about three or four rounds for Gennady to figure him out but I don’t think that the fight goes into the fifth round – or much into the fifth round – personally.”

Click here for a video of Gennady Golovkin’s greatest knockouts.

Rubio (59-6-1, 51 knockouts) has won six straight fights, five by knockout, since falling by unanimous decision to Julio Cesar Chavez Jr. in February 2012 and he is 16-1 with 14 knockouts in his last 17 fights.

Trained by former titleholder Robert Garcia in Oxnard, Calif., Rubio has stated that he plans to dictate “a real Mexican-style fight” against Golovkin (30-0, 27 KOs), who is 32.

Rubio, 34, owns stoppage wins over former titleholder Carlos Baldomir, previously undefeated David Lemieux and Canelo Alvarez’s older brother, Rigoberto. Rubio also has gone the distance in a split decision loss to ex-beltholder Kassim Ouma and was knocked out in the ninth round by former undisputed champion Kelly Pavlik, the latter in February 2009.

“I think that since he was stopped by Kelly Pavlik in that fight, that Rubio has grown up a little bit. I think that he has matured because of his performances in meeting better foes. He fought Chavez to a 12-round decision loss,” said Sanchez of Rubio, who was last in action for a 10th round stoppage of Domenico Spada in April.

In his last fight in July, Golovkin scored a third round technical knockout over Daniel Geale at New York’s Madison Square Garden, representing the fourth time Golovkin has fought in New York in his past seven fights and the fifth time the native of Kazakhstan has fought on the East Coast.

Against Rubio, Sanchez anticipates that Golovkin will pick up on the West Coast where he left off on the East Coast.

“As I’ve said in the past, once Golovkin touches somebody, it doesn’t matter where it is in the fight. It’s like Mike Tyson used to say: once he touches somebody, their game plan goes out the window,” said Sanchez.