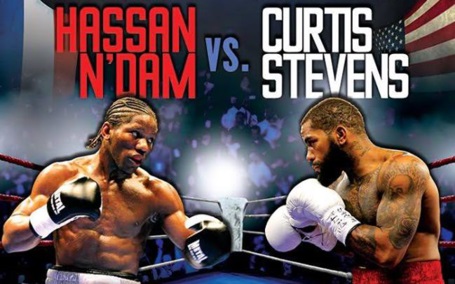 N’Dam thoroughly outboxed Stevens to win a one-sided unanimous decision in a title-elimination fight on Wednesday at the Barker Hangar, N’Dam’s first significant test since he went down six times in a loss to Peter Quillin in 2012.

As a result, the Cameroon native earned the right to challenge the winner of the fight next Saturday between IBF middleweight titleholder Sam Soliman and former champ Jermain Taylor.

“I wanted to show the people that I’m a real middleweight contender and I did,” N’Dam said. “Now I only want to watch the fight on Oct. 8 and take on the winner.”

Stevens also faced his biggest challenge since he was brutally stopped in eight rounds by Gennady Golovkin in November. With the loss, his future is uncertain.

The pattern of the fight wasn’t complicated. N’Dam, the much taller and more athletic of the two, jabbed and danced while a frustrated Stevens tried in vain to get inside, the only place where he could do damage.

Stevens had a few moments when he either slipped under N’Dam’s long reach or pushed him against the ropes, where he landed some telling blows. However, that was the exception. N’Dam largely had his way with Stevens.

In fact, it was N’Dam (31-1, 18 knockouts) who scored the only knockdown of the fight. The two threw simultaneous rights early in the eighth round, N’Dam’s landed first and Stevens went down.

Stevens (27-5, 20 KOs) survived the knockdown and rallied in what became the most-exciting round of the fight and might’ve stunned N’Dam with a big shot in the 12th but it didn’t matter much. In the end, N’Dam ran away with the fight.

In preliminary fights, welterweight prospect Fredrick Lawson (23-0, 20 KOs) put Ray Narh (26-6, 21 KOs) down twice en route to a unanimous decision in a 10-round fight. The slick but overmatched Narh went down in the second and eighth rounds but managed to survive until the final bell. The scores were 99-89, 99-89 and a baffling 95-93 from judge Gwen Adair.

Both Lawson and Narh are from Ghana.

Also, Colombian Miguel Marriaga (19-0, 17 KOs) made a strong statement in his U.S. debut, stopping one-time prospect Christopher Martin at 2:30 of the sixth round of a scheduled eight-round featherweight fight. Marriaga put Martin down in the sixth round and was pummeling him against the ropes, prompting the referee to stop the fight.

Erin Mahoney contributed to this report