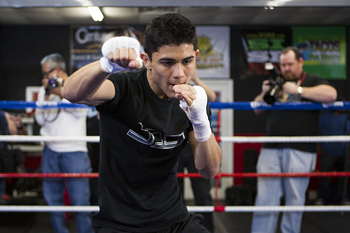 Diaz-Hidalgo was televised live on Fox Sports 1 and Fox Deportes along with two other bouts on the Golden Boy Promotions/Mike Battah-promoted card.

Diaz (12-0, 8 knockouts), a 21-year-old southpaw from South El Monte, California, dropped Hidalgo with a right hook in Round 1 and scored three knockdowns in Round 7, forcing referee Tony Weeks to wave the fight off at 2:12 of the round. A left to the body sent Hidalgo down for the first knockdown in Round 7. The 25-year-old native of Chihuahua, Mexico, never recovered from the body shot.

Between the first-round knockdown and the seventh-round stoppage, the talented 2012 U.S. Olympian out-boxed, outworked and outclassed Hidalgo (22-12, 16 KOs), who could only try to survive.

The victory was the fourth bout for Diaz in 2014. His last bout was a much tougher outing as he had to dig down deep to win a 10-round decision over fellow prospect Ramiro Robles in July.

Maldonado (19-2, 16 KOs), a 23-year-old southpaw from Albuquerque, New Mexico, scored a technical knockdown when he wobbled Lara with a left-right combination at the start of Round 8. Referee Tony Garcia halted the bout at the 1:30 mark after Maldonado connected with a few flush power shots against a still dazed Lara along the ropes.

Maldonado was in control through the first three rounds of the bout but by the end Round 4 the fight developed into the kind of entertaining scrap that the New Mexico native is known for. Maldonado tired himself out slugging it out with Lara (15-5-4, 8 KOs) in Round 4 and was nailed with nose-bloodying right hands from the 30-year-old Costa Rica-based Nicaraguan before the bell.

Maldonado hurt Lara with body shots early in Round 5 and boxed well in spots in Rounds 6 and 7 but the journeyman had his moments, landing solid shots during exchanges at the end of both rounds. Maldonado was docked a point for spinning Lara in Round 7 but made the penalty moot with his strong final round.

In the opening bout of the broadcast, Ricardo Alvarez scored a unanimous decision over former WBA bantamweight titleholder John Michael Johnson in an eight-round lightweight bout. Alvarez (24-3, 14 KOs), the 32-year-old older brother of Mexican star Canelo Alvarez, was mobile and busy enough to out-point the game 46-year-old veteran by scores of 79-73, 78-74 and 77-75.

Johnson (31-10, 23 KOs), who was one four-round bout removed from an 11-year hiatus from boxing (and 20 years removed from his title victory over Junior Jones), had his moments in the bout, especially when he was able to get Alvarez against the ropes.