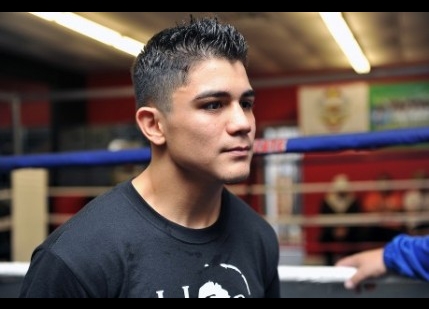 Junior featherweight Joseph Diaz Jr. will be the headliner for the first time in his career when he meets Raul Hildalgo at the State Farm Arena in Hidalgo, Texas, as part of Monday’s “Golden Boy Live!” event on to be televised on FOX Sports 1 and FOX Deportes.

Diaz-Hildalgo was elevated to prime time status late last week when former light heavyweight champion Antonio Tarver suffered a fractured thumb on his left hand that forced him to pull out of his heavyweight bout against Johnathon Banks.

“This is a dream come true. Ever since I was a little kid, I’ve always wanted to fight in a main event. That was one of my goals and just to get the opportunity from Golden Boy [Promotions] and my manager, Ralph Heredia telling me that I was going to be in the main event, like I said, man, it’s a dream come true,” said Diaz.

A 2012 U.S. Olympian with a record of 11-0 that includes seven knockouts, Diaz is up against a rugged rival in Hildalgo (22-11, 16 KOs), a 25-year-old whose unanimous decision over Gonzalo Garcia in July helped him rebound from a unanimous decision loss to Jose Lopez in June.

“My opponent, he’s very tough and he likes to move around. Whenever there is an exchange of punches, he’s very smart in there. He likes to clinch and all of that. He displays a lot of knowledge in the ring. We’ve been working on how to better cut off the ring and on stepping back and throwing uppercuts and landing the left hand and stuff like that when someone tries to clinch,” said Diaz, 21.

“But, you know, Raul has probably been watching film on me as well, so he might come with a different game plan. So we’ve been practicing everything so that whatever Raul Hildalgo brings, we’ll be ready for him. If the knockout comes, then it comes but I’ll go out there and just do what I do best and do whatever it’s going to take to come out of there with the victory.”

Diaz is coming off a unanimous decision victory in July over Ramiro Robles, a 21-year-old who had won seven straight fights, three of them by knockout before the loss.

“That fight was very tough. That guy was very aggressive and we knew, going into the fight, that the guy was going to throw a lot of punches and be very aggressive. But we didn’t know that he was going to be that durable because I was throwing a lot of powerful punches and landing clean punches. I just kept doing what I had to do, boxing, moving and giving him angles. A lot of my fans have told me that it was a great fight and that I showed a lot of heart and determination in a fight where we threw a lot of punches, nonstop, for 10 rounds,” said Diaz.

“But after that last fight, my manager and my father said that I was probably overtrained for my first 10-rounder. I trained very hard and I was running a lot and they felt that for that fight, I didn’t have as much pop in my punches as I should have. So for this fight, I’ve taken it down a notch. I’ve still been working very hard but I’m also getting the necessary rest that I need and I’m ready. I’m almost right on weight, probably about two pounds over and I just really feel great. My body doesn’t feel week, fatigued or anything and I think that with my conditioning, it’s going to show on Monday with a lot of power and my speed.”