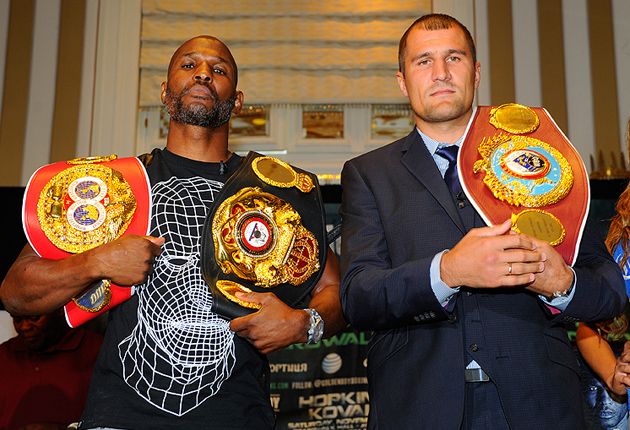 In advance of the Nov. 8 Bernard Hopkins-Sergey Kovalev light heavyweight title unification bout at Boardwalk Hall in Atlantic City, HBO will air the first episode of its companion “24/7” series on Oct. 18 at 12:15 a.m. ET/PT. The show will follow the network’s broadcast of Gennady Golovkin’s WBA middleweight title defense against Marco Antonio Rubio at the StubHub Center in Carson, Calif.

The WBO titleholder who will be making his third consecutive appearance in Atlantic City and his second at Boardwalk Hall, Kovalev (25-0-1, 23 knockouts), 31, has vowed to make history by defeating IBF and WBA counterpart Hopkins (55-6-2, 32 KOs).

A native of Chelyabinsk, Russia, whose fourth round stoppage dethroned previously unbeaten WBO beltholder Nathan Cleverly in August 2013, Kovalev rose from a first round knockdown to drop Blake Caparello three times en route to last month’s second round stoppage victory at the Revel Resort in Atlantic City. Kovalev scored his 13th knockout in 14 fights against Caparello.

In his last fight in April, Hopkins, 49, scored a unanimous decision that dethroned Beibut Shumenov for the WBA belt. A future Hall-of-Famer, Hopkins won a unanimous decision over previously unbeaten Tavoris Cloud in March 2013 to extend his own record as the oldest man to win a significant crown.

Hopkins first set the record at the age of 46 by outpointing Jean Pascal for the WBC’s title in May 2011 before being dethroned following a majority decision loss to Chad Dawson in April of 2012.

Dulorme was last in action for a unanimous decision over Karim Mayfield in March, having suffered his lone setback by seventh round stoppage to Luis Carlos Abregu as a welterweight in Oct. 2012.

“I met with him for a long time and talked to him and talked to his trainer, Robert Garcia, and he’s training good. He’s back from Puerto Rico and we’ve discussed several things,” said Dunkin.

Warrington, 23, who has signed a five-fight deal with Matchroom Boxing, will face Dieli, 35, for the vacant European featherweight title. Meanwhile, Selby, 27, will fight Joel Brunker in an Oct. 11 IBF featherweight title eliminator for the right to face Russian beltholder Evgeny Gradovich.

“If Selby goes on to win a world title, then this time next year, we could have a big domestic fight,” said Warrington. “I won the British at Leeds Arena and now, it’s the European [title] at the same arena. I’ve got to keep winning.”

Burns, 31, will attempt to come back from two consecutive losses after having gone unbeaten in 22 fights before falling by consecutive unanimous and split decisions to undefeated fighters Terence Crawford and Dejan Zlaticanin in March and June, respectively.

A 32-year-old Argentine, Gonzalez is coming off a fourth round technical knockout of Adrian Marcelo Flamenco in May that helped him to bounce back from a seventh round stoppage loss in October 2013 to Paulus Moses, whom Burns vanquished by unanimous decision in March 2012.

Note: Warrington quotes from a release by Matchroom Sport.

Stieglitz, 33, was last in action for a 10th round stoppage of Sergey Khomitsky in a July comeback win after losing his strap via split decision loss to Arthur Abraham in March.

Sturm, 35, earned the IBF middleweight title last December with a second round stoppage of Darren Barker. Sturm then lost the belt in his last fight in May by unanimous decision to Australian Sam Soliman for the second time in under 16 months.

Sturm had fallen by unanimous decision to Soliman in February 2013 but the result was changed to a no-contest after Soliman tested positive for a banned substance.