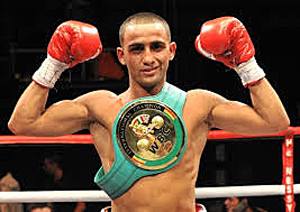 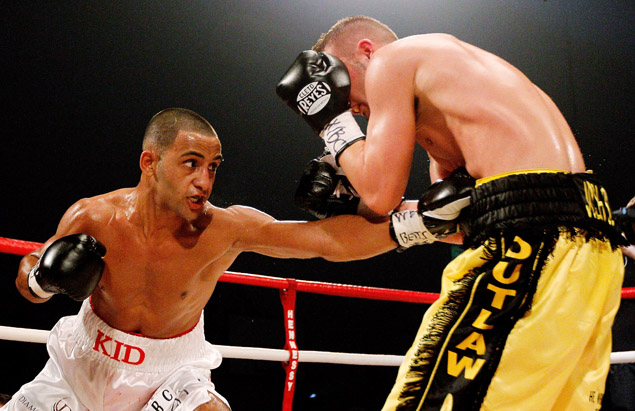 British star Kid Galahad (AKA Barry Awad) might best be termed as the other guy in the junior featherweight division. The super talented switch hitter is practically invisible inside the ring but, to his never ending frustration, many insiders believe he is being ignored outside of it.

Galahad, from Sheffield, England, is a stable mate of Kell Brook, the unbeaten boxer puncher who recently relieved Shawn Porter of the IBF welterweight title. Currently THE RING’s No. 10-rated junior featherweight, the 24 year old Galahad will meet Adeilson Dos Santos this Saturday night and seeks to make a statement and up his profile.

“I’ve had a look at Dos Santos,” said Galahad, nonchalantly. “He’s a tall rangy opponent but, to be honest, I’ve only watched half a round from one of his fights and that was enough. In this game you have to be ready for anything because you never know what’s going to happen in the ring. I’ll be 100% prepared to do a job on him and win in style.”

At this moment THE RING junior featherweight rankings list three British fighters within the top ten, which is great news for the UK scene. Carl Frampton (No. 1) and Scott Quigg (No. 3) have both won bouts in recent weeks, and Galahad remains far from impressed by either man.

“I watched Carl Frampton win the IBF title from Kiko Martinez and thought it was a good performance,” said Galahad, who is a British, Commonwealth and European title holder. “People are raving about it but, at the end of the day, Martinez was beaten twice by Rendall Munroe who isn’t a great boxer in my eyes. I’m not taking anything away from Frampton, but you have to keep things in perspective.

“The Scott Quigg fight didn’t tell me anything that I didn’t already know. We can give him credit for getting a stoppage but who was that guy? (Stephane) Jamoye performed like a four-fight novice and, if we’re being real, who has Quigg ever fought? Yoandris Salinas got himself knocked out, by a journeyman, immediately after pushing Quigg to a draw.”

The contempt which Galahad (17-0, 9 knockouts) exudes when discussing Frampton and Quigg is genuine. There are times when a fighter can sound as though he’s trying to convince himself of his superiority but this negative appraisal was unwavering and the Sheffield hotshot is more than confident in his skills.

Galahad said, “Frampton and Quigg already know I’ll beat them. When you’re in a fight hitting one another it’s all good, but when you’re in with a guy who is hitting you and taking nothing back that’s something else. They would both ship punishment and neither would be able to get punches off. I need to get myself into a mandatory position, so the excuses stop and the fights happen.

“In time, when I beat them both, people are going to say they weren’t that good in the first place. Neither of them can prepare for a fighter like me because I can do everything. I can box and I can fight. I’m good on the inside and I’m good on the outside. I’m very hard to beat, and these guys are deliberately looking in the other direction.”

The other two big stars in the 122 pound division are Leo Santa Cruz (THE RING No. 2) and Guillermo Rigondeaux (THE RING Champion) and the habitually honest Galahad is split on their respective abilities.

“Santa Cruz is a good fighter but he’s another one who isn’t testing himself,” said Galahad, with dissatisfaction in his tone. “How many 50/50 fights has this guy had? How many 50/50 fights have Frampton and Quigg had? When I was 22 years old I boxed Jazza Dickens, who was the same age as me, unbeaten, and that was considered a 50/50 match up. I knew I would win late but I still took the risk – these guys don’t take risks.

“Rigondeaux is a terrific all-rounder. He’s pound for pound one of the top three best fighters in the sport in my opinion. This guy is a hard night’s work for anyone, and you can’t afford to make the slightest mistake against him. You must constantly adapt against Rigondeaux but I personally believe that, within two years, I’ll have the ability to beat him.”

The atmosphere at the Ingle Gym in Sheffield has been on a serious upswing following Kell Brook’s win over Shawn Porter and Galahad spoke highly of his gym mate, who is still recovering from a knife wound sustained during “an unprovoked attack” in Tenerife.

“Everyone wrote Kell off against Porter,” said Galahad, with pride “I watch him in training all the time and he’s extremely gifted. He’s been in this sport for 20 years and when you’ve boxed for that long it becomes natural to you, like waking up in the morning. People thought I was being biased when I picked him to win, but I’ve seen Kell put super middleweights over in sparring.

“There’s a great buzz in our gym and it makes me want to become world champion even more.”