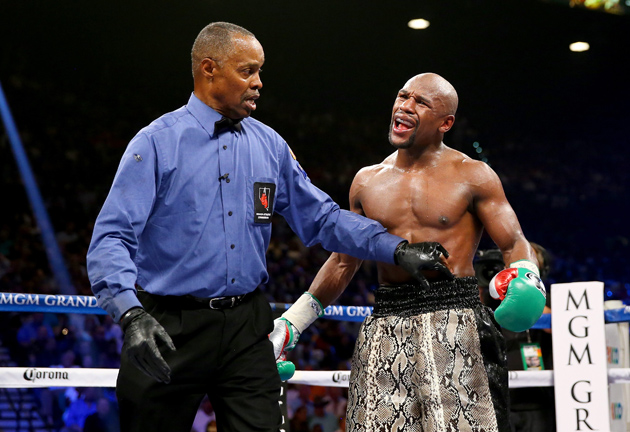 Kenny Bayless says everything was “going pretty smoothly” during the Floyd Mayweather Jr.-Marcos Maidana rematch until Mayweather “claimed that he had gotten bit” by Maidana during Round 8 of the fight that Mayweather won via unanimous decision on Saturday.

Bayless, who spoke to RingTV.com on Sunday, said he had “never been influenced by camps” entering Saturday’s return bout at the MGM Grand in Las Vegas, site of Mayweather’s majority decision over Maidana in May.

Bayless discussed Mayweather’s complaint about being bitten by Maidana, as well as his 10th-round penalty deduction against Maidana for appearing to force Mayweather to the canvas.

The fight represented Bayless’ fourth time working with Mayweather, having been the third man in the ring for the undefeated boxer’s triumphs over Oscar De La Hoya in May 2007, Shane Mosley in May 2010 and Canelo Alvarez in May 2013.

Bayless also was in action for Maidana’s eighth-round stoppage of Jesus Soto Karass in September 2012, during which he deducted a point from the Argentine for infractions.

Below are Bayless’ comments:

Kenny Bayless on the early going of Mayweather-Maidana II:

“Knowing going into it what had happened in the past in the first fight, I had told them in the dressing room that if they were going to clinch, that I would give them the opportunity to fight out of it, but the clinches that they were in were hard clinches.

“So, with that, I got in as quickly as I could and separated them so that they wouldn’t get into any fouling or into even any unintentional fouls. I just wanted to start out the fight that way. So that’s the reason that I was getting in as quickly as I did, because I didn’t want them to get tangled up.”

Bayless on the bite incident:

“Then, just about when I thought that everything was going smoothly, that was when Mayweather claimed that he had gotten bit. Now, when I first looked at the area on the inside of the hand that he was referring to, it was just glove. I mean, there was no break in the glove.

“There was no indication on the glove that would make me feel that he was bitten, but Floyd was very adamant that he was bitten. So at that point in time, I called time out, and Floyd Sr. had worked his way up onto the ring apron and he was pretty ticked off about it. So I had to kind of settle him down and get him to kind of go back down the stairs.

Bayless on the point deduction against Maidana for forcing Mayweather to the canvas:

“I think that it was in the next round when Maidana wrestled Floyd with his forearm in his face and just literally threw him to the ground. At that point, I took a point from Maidana. It was obvious that what he did was very intentional, so I took a point from him. At that point, I just tried to stay as close to the action and tried to prevent anything that might occur again after that.”

Bayless on warning Mayweather for his infractions and use of the elbow in the fight:

“There was a little bit happening on both sides, yes, but it was pretty much something that I was pretty well prepared for, but I guess that I wasn’t prepared for the bite. I know that Floyd may have been getting a little frustrated, too.

“I had heard stuff at the end that Maidana indicated that Floyd was thumbing him in the eye during those clinches when he came in low. I don’t know. It was underneath, and it was hard to determine what was going on underneath.”

Bayless on examining Mayweather’s un-gloved left hand after the fight:

“After the fight, Floyd showed me on his hand and on the finger next to his pinky finger, apparently where he took the bite. It kind of looked like an abrasion on his finger. Maidana denied that he did it, but that’s one thing within itself. I asked the fight doctor, and the fight doctor looked at it, and the fight doctor’s attitude is that it could have been…it was 50-50 to him.