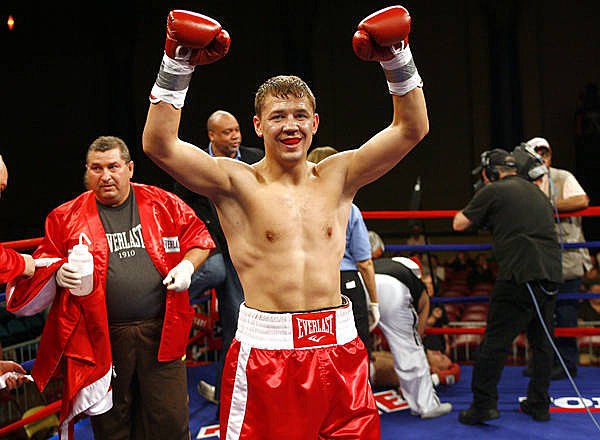 Negotiations are underway for a potential bout on Nov. 22 between unbeaten southpaws Matt Korobov and Billy Joe Saunders for the WBO’s middleweight belt that was vacated last week by Peter Quillin, according to Top Rank Promotions CEO Bob Arum.

Arum said he has been in contact with English promoter Frank Warren, for plans to land Korobov-Saunders on the undercard of a rematch between heavyweights Tyson Fury and Dereck Chisora at ExCel Arena in Dockland, London.

“We’re talking with Frank Warren about doing the fight over in England on the Fury-Chisora card,” said Arum. “That would be against the Irish guy who is number two, Billy Saunders. We’re negotiating that with Frank, who is Saunders’ promoter.”

Quillin stood to make a career-high $1.4 million payday against Korobov due to the $1.9 million purse bid won by Roc Nation Sports last month.

In his last fight in June, Korobov scored a unanimous decision over Jose Uzcategui.

Ranked number two behind Korobov by the WBO, Saunders (20-0, 11 KOs), 25, was last in action for an eighth round knockout of Emanuele Blandamura in July.

Although WBO President Francisco “Paco” Valcarcel could not be reached for an immediate comment, top assistant Jose Izquierdo said he is aware of the discussions regarding a potential bout between Korobov and Saunders.

“I heard about that this morning but I can’t confirm anything yet because the World Championship Committee needs to convene and make its determination and that should come shortly. I’m actually sitting here with the chairman of the World Championship Committee, Luis Bautista, and we’re waiting for Paco,” said Izquierdo, general secretary of the WBO.

“We’ll discuss how we’re going to go about this but there is nothing confirmed from our end yet. We’ll obviously use the best classified contender criteria and that gives us a bit of latitude. It all depends on who is available as per our rules. We’ll see what we have and what the options are and chairman Bautista will make his determination with his committee and then we’ll inform but we need to check on those details before we can give a more educated response.”