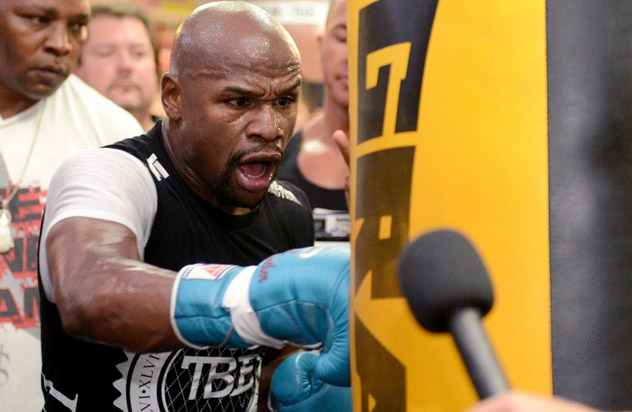 Floyd Mayweather Jr. addressed the reading controversy raised by rapper and former ally 50 Cent as well as his association with Manny Pacquiao’s former strength-and-conditioning guru Alex Ariza, among other things during a Wednesday conference call with reporters.

During the nearly hour-long interview, Mayweather (46-0, 26 knockouts) also discussed the work of referee Tony Weeks (whom officiated his majority decision over Marcos Maidana in May) and that of Kenny Bayless,, who will be the third man in the ring for the rematch with Maidana at the MGM Grand in Las Vegas.

Ariza has been documented in photos and video working with Mayweather in training after having been a member of the Maidana camp for their first bout.

Bayless was selected by the Nevada State Athletic Commission to officiate Mayweather-Maidana II, having refereed Mayweather’s victories over Oscar De La Hoya in May 2007, Shane Mosley in May 2010 Saul Alvarez in May 2013 and Maidana’s eighth round stoppage of Jesus Soto Karass in September 2012.

Mayweather said he thought Weeks was too lenient on Maidana, whom he said “bent my arm” in the second round “when the ref told us to break” and caused Mayweather to shake it noticeably.

Floyd Mayweather Jr. on whether or not 50 Cent crossed the line in raising questions about his ability to read:

“I don’t know. My thing is this, I try to focus on Maidana. I don’t focus on that. I think that people can believe whatever they want to believe. Intelligence and education are two different things.

“I’m happy with my career and I wish 50 Cent nothing but the best. When I’m in training camp, I try to focus on my training. You’ve got to realize that the circus is for clowns.

“My job is just to focus on my job, which is boxing. I know what I can and cannot do, so I could care less. I don’t really worry about that. Like I said before, that’s really not my focus.

“Like I said before, I know what I can and cannot do, you know? I’m pretty sure that everybody who is on this phone, if you guys don’t know, when you’re dealing with pay-per-view, you have to read at least 60 to 70 teleprompters.

“I don’t think that they can choose a better person for the job than myself. I go out there and I do it with no problem. I ask myself and I’m not judged by a person to define my place in boxing history. Would God not let me in Heaven if I didn’t read like a news anchor?

“Me, myself, I would be perfect at reading if it was how I made a living and how I fed my family but once again, intelligence and education are two different things.

“And first of all, making fun of a person because he can’t read is not funny. It’s tragic. If I really couldn’t read, it would make my accomplishments even that much more amazing, so this is why I could care less.

Mayweather on the footage that was played by the radio station:

“I don’t get paid to read radio drops. I’m capable of having a bad day. I’m not perfect but you know as well as I know that that was taped. They edited it how they wanted to do it.

“People try in different ways to try to tear people down and to break people down but I’m going strong and I’m happy. We talk about that situation but explain the videos that have been shown of me reading teleprompters and reading for other things.

“When I was at the ESPYs, I had to read a teleprompter. I’m pretty sure you guys thought that I did an okay job. I’m not a news anchor and never claimed to be. I’m a boxer.

“But I didn’t get to where I’ve gotten to by not being able to write and read and I’m going to say this once again: intelligence and education are two totally different things.”

“I’m pretty sure that Kenny Bayless is going to be watching both sides extremely close.

Mayweather on whether Bayless officiating victories over De La Hoya, Mosley and Alvarez is a familiarity advantage in his favor compared to only having worked one of Maidana’s win over Soto Karass:

“It’s a job that the referee is there to do and that’s not leaning toward my side or not leaning toward Maidana’s side. But I don’t think that with the team meeting before the fight, hopefully, and I’m pretty sure that the last time Leonard and my team didn’t know that Robert Garcia was going to tell his guy to go out there and be extremely dirty.

“My health is more important that money or anything. I have to be healthy to go out there and perform the way that I do and truly believe in having a career after the sport of boxing is over and I’ve said that before in some of my past interviews. This is not the MMA; this is boxing. I don’t know if you guys noticed but I got tackled, the guy tried to knee me and I got a headbutt and I got hit with rabbit punches. I got hit with low blows and the list goes on and on.

“But it’s not cool for him as a trainer and one of the best trainers in the sport of boxing to be telling a guy to be dirty and then to get upset when Brandon Rios fights and he wants to complain to the referee. Like I’ve said before, that’s not cool at all.”

Mayweather on his relationship with Ariza:

“Alex Ariza is out in Las Vegas taking care of some personal stuff. Our gym is open to everyone. In the past, I’ve spoken about Alex Ariza but I never knew him. He was able to come by the gym and he watched me train and he showed me some stretches.

“I ran for him and that’s it. He handles business with other fighters. I’m not enemies with Alex Ariza. We may just talk about boxing. With Alex Ariza, he said, ‘I’ve never seen a fighter that I’ve trained work as hard as you and I see why you’re where you are today.’

“He said, ‘I just wanted to come and see for myself.’ He said that, ‘I thought that ‘All Access’ was just camera tricks. I didn’t know that you worked that hard. I’ve never seen a fighter work as hard as you. Now I see why you are where you’re at in the sport of boxing.’

“Yesterday, after my run, he showed me some other stretches that I can do that help me. I would say that it was nothing more than that…I can’t say who is going to be around me during fight week. I don’t really know. I can’t really say.

“…We don’t know who is going to be around. Fight week, I’m not going to be around nobody. I’m going to be at home resting. That’s where I should be. Alex came to the gym on more than one occasion but just because a guy comes to the boxing gym and watched me train or a guy goes and eats with us, that doesn’t mean he’s my strength-and-conditioning coach.