Could Coach Pacquiao land World Peace for his basketball team? 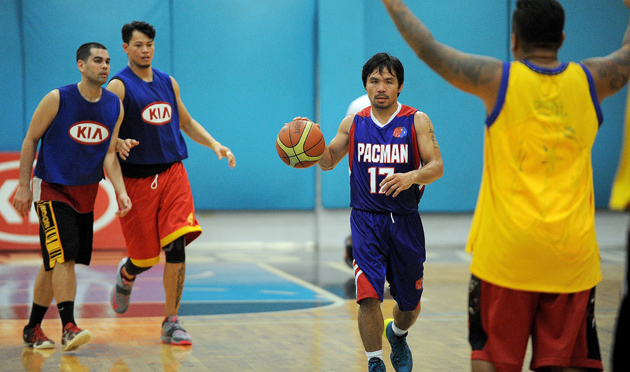 Manny Pacquiao dribbles during practice with the Kia Motors team of the Philippine Basketball Association in Manila on Aug. 15. The 35-year-old boxing Filipino legend joined the draft for new players on Aug. 24 before flying to China to promote his Nov. 22 fight against Chris Algieri. Photo by Jay Directo/AFP/Getty Images

“He’s OK. He’s my friend,” said Pacquiao, 35, according to The Los Angeles Times, which cited The Philippine Star. “We need a good import. If we get him, that would be nice.”

A former Los Angeles Laker, World Peace has already signed a one-year deal worth $1.43 million to play with the Sichuan Blue Whales in China.

Meanwhile, Pacquiao (56-5-2, 38 knockouts) is in the midst of an ambitious media tour in advance of the Nov. 22 defense of his WBO welterweight belt against rising WBO junior welterweight titleholder Chris Algieri (20-0, 8 KOs).

After having already made two stops in China for the tour, Pacquiao and Algieri are scheduled for San Francisco on Friday followed by visits to Las Vegas, Los Angeles and New York.

Pacquiao will face Algieri at the Cotai Arena at the Venetian Macao in Macao, China, where Pacquiao unanimously decisioned Brandon Rios in November.

On Friday, Pacquiao will throw out the first pitch for the San Francisco Giants’ game against the visiting Milwaukee Brewers, with a hitting contest between Pacquiao and Algieri slated to happen prior to the start of the contest, according to Top Rank’s Bob Arum.

“San Francisco is a very important city for us on the pay-per-view because of its very large Filipino population in the area,” said Arum, during an interview with RingTV.com from San Francisco on Friday. “So there is a lot of excitement here and I’m very motivated because I think that this pay-per-view is going to do a lot better than people thought.”

On Monday, Pacquiao will throw out the ceremonial first pitch when the Los Angeles Dodgers play host to the Nationals at Dodgers Stadium.

On Sept. 6, Algieri will serve as the grand marshal along with community leaders Anthony Mastrioanni and Thomas Jerideau in the Fifth Annual Huntington Awareness Day Parade, according to Algieri’s promoter, Joe DeGuardia of Star Boxing.

“I think that there is going to be a lot of excitement there,” said Arum. “Algieri has a tremendous fan base in New York.”

The remainder of the tour is as follows:

Unbeaten junior middleweight Trevor McCumby and middleweight Shane Mosley Jr. are among those to be featured on a Sept. 20 event at the Celebrity Theater, Phoenix, Ariz., Iron Boy Promotions and Top Rank Promotions announced on Thursday.

Verdin, 38, lost to Justin Thomas by unanimous decision on August 16.

Also on the card, two-time Lithuanian Olympian Egidijus Kavaliauskas will be after his seventh consecutive knockout win against a welterweight opponent to be determined, while light heavyweight Oleksandr Gvozdyk, a Ukrainian bronze medalist in the 2012 Olympics in London, takes on Lamont Williams.

Both Kavaliauskas and Gvozdyk are trained by Robert Garcia in Oxnard, Calif.

Other fights will feature welterweight Konstantin Ponomarev (24-0, 12 KO), who is trained by Jesse Reid Sr., and lightweight Victor Castro, who is trained by three-time titleholder Israel Vazquez. Castro is being matched against Pablo Becerra.

KENNY BAYLESS TO BE FEATURED ON HBO’S ‘CORNERED’

Referee Kenny Bayless will be profiled on HBO’s second edition of its short series, “Cornered,” on Sept. 9 at 10:30 p.m. ET/PT, the network has announced.

Bayless was selected by the Nevada State Athletic Commission to officiate the Floyd Mayweather Jr.-Marcos Maidana rematch on Showtime on Sept. 13. Bayless has refereed Mayweather’s victories over Oscar De La Hoya in May 2007, Shane Mosley in May 2010 and Saul Alvarez in May 2013.