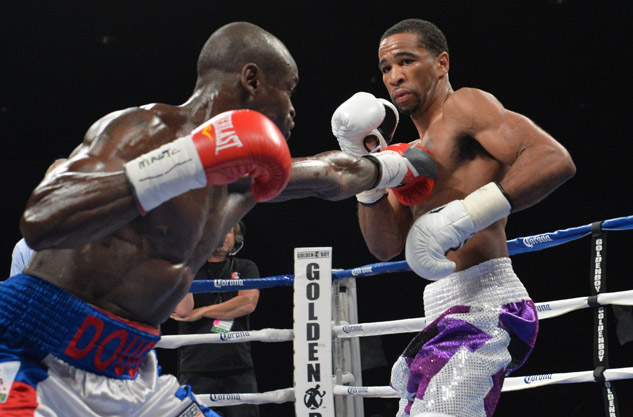 Former junior welterweight title challenger Dierry Jean has returned to the lightweight division to face Daniel Ruiz on Sept. 27 at Bell Centre in Montreal, promoter Yvon Michel announced in a release on Thursday.

A Haitian-born resident of Quebec, Jean (26-1, 18 knockouts), 32, will fight Ruiz (32-7-2, 22 KOs) in supportof a light heavyweight fight between ex-titleholder Tavoris Cloud and Artur Beterbiev, which was reported by RingTV.com on Wednesday.

Jean was last in action for an eighth round stoppage of Mario Perez at 135 pounds in June, a win that helped him rebound from a unanimous decision loss to IBF 140-pound titlist Lamont Peterson in Peterson’s hometown of Washington, D.C.

Cloud, 32, lost the IBF light heavyweight title in a unanimous decision loss to Bernard Hopkins in March of 2013 and was stopped in the seventh round of his following fight last September by RING champion Adonis Stevenson.

A graduate of the University of Dagestan in Makhachkala with a degree in law, Beterbiev, 29, was a solid amateur, participating in both the 2008 and 2012 Olympic Games.

In 2008 in Beijing, Beterbiev lost in the second round to the eventual gold medalist Zhang Xiaoping of China. In 2012 in London, Beterbiev was beaten in the quarterfinals by eventual Olympic champion Oleksandr Usyk of Ukraine.

As an amateur, Beterbiev twice defeated current WBO beltholder Sergey Kovalev. However, as a professional, Beterbiev has faced just one fighter with a record above .500 and has two stoppage victories in the first round as well as one each in the second, third and fourth rounds.

“Artur Beterbiev is an extremely special talent and we have a boundless confidence in his abilities,” said Michel of Beterbiev, who is coming off a first round stoppage of Alvaro Enriquez on August 22.

“It is unheard of for a fighter with only five fights of professional experience to headline an event at the Bell Centre against an opponent the caliber of Cloud.”

Also fighting in separate bouts will be welterweights Kevin Bizier and Antonin Decarie, both from Quebec.