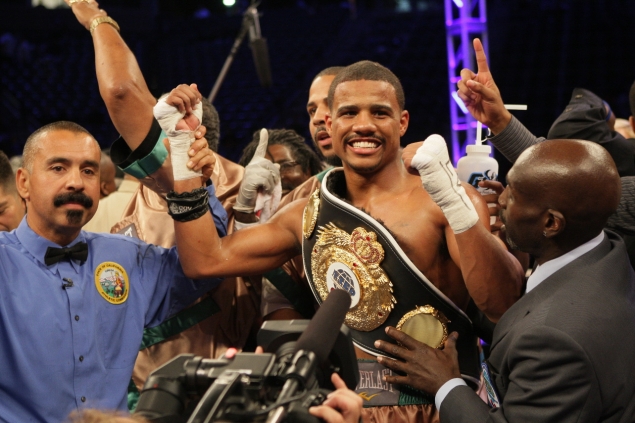 Dirrell was last in action with a fifth-round stoppage of Vladine Biosse on Aug. 1, ending an 18-month ring absence. In his previous bout in February 2013, Dirrell scored a unanimous decision over Michael Gbenga.

Dirrell lost by split-decision to then-WBC beltholder Carl Froch in October 2009, and owns an 11th-round disqualification victory over Arthur Abraham, now the WBO’s titleholder, in March 2010.

An Australian who turns 41 in November, Soliman won the title in his last fight in May by unanimous decision over Felix Sturm before the latter’s partisan fans in Germany.

In his last fight in December, Taylor, 36, ended a 14-month ring absence with a seventh-round technical knockout over Juan Carlos Candelo, whom he dropped in the final round.

The only fighter that can claim two victories over Bernard Hopkins, Taylor will be after his fifth straight victory against Soliman.

Taylor had lost four of his previous five fights, two of them by 12th-round knockout, before ending a 26-month ring absence with an eighth-round stoppage of Baltimore’s Jessie Nicklow in December 2011.

Barthelemy (20-0, 12 KOs) is coming off a unanimous decision that dethroned then-beltholder Argenis Mendez in July, while Saucedo (52-5-3, 8 KOs) has won 14 straight fights, seven by knockout, and is coming off a third round technical knockout of Luis Armando Juarez in June.