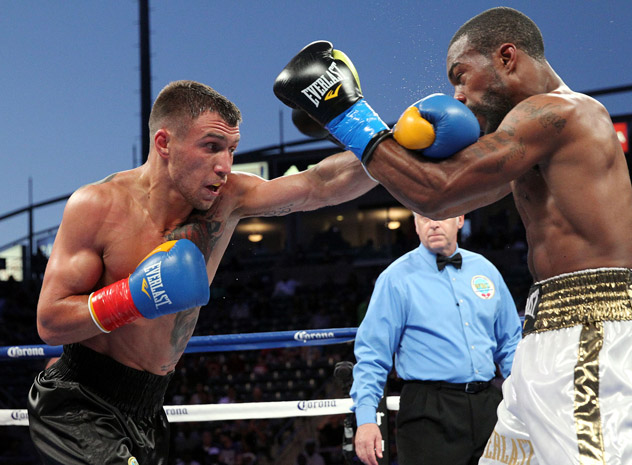 Pacquiao-Algieri is taking place at the Cotai Arena at the Venetian Macao under the Top Rank Promotions banner.

Piriyapinyo (52-1, 33 KOs), 29, from Thailand, has won eight consecutive fights, six by stoppage, since falling by unanimous decision to Chris John in a failed bid to earn the WBA belt in November 2012.

Prior to facing Russell, Lomachenko lost a split decision in March to then-WBO titleholder Orlando Salido, who already had lost his belt at the scales after failing to make the 126-pound weight limit. As a result, the title was rendered vacant.

The winner of the eliminator would become the mandatory challenger to the winner of the Sept. 6 match-up between WBA and WBO titleholder Juan Francisco Estrada and former beltholder Giovani Segura.

Marco Huck (37-2-1, 26 KOs) will make the 13th defense of his WBO cruiserweight title against Mirko Larghetti (21-0, 13 KOs) on Saturday at the Gerry Weber Stadium in Halle Westphalia, Germany, Sauerland Events announced on Friday.

If victorious, Huck, 29, can establish a cruiserweight record for consecutive defenses, having earned his belt with a unanimous decision over Victor Emilio Ramirez in August 2009. Huck’s only blemish within his title run is a majority draw against Ola Afolabi in May of 2012. A year and two fights later, Huck would win a rematch by majority decision.

The current record holder is ex-WBO titleholder Johnny Nelson, who won the belt with a fifth round stoppage of Carl Thompson in March 1999 and successfully defended it 12 times, retiring after a split decision win over Vincenzo Cantatore in November 2005.

“Nelson was an exceptional athlete who did not back down from any challenge. I am no different,” said Huck in a release.

“His style of fighting was not the most spectacular but it was successful. It is an honor to get the chance to equal his record…My aim is to beat Larghetti first, then Nelson’s record.”

Chavez (48-1-1, 32 KOs) was last in action for consecutive unanimous decisions over Bryan Vera last September and in March. The wins over Vera followed a unanimous decision loss in Sept. 2012 to Sergio Martinez that cost Chavez the WBC’s 160-pound belt.

“Basically, Chavez just advised us through his manager, Billy Keane, that he was not going to enforce his status as the mandatory. The purse split, according to the rules, would be 70 percent for the champion and 30 percent for the challenger. It is very common that there is a request from either the champion or the challenger to modify the split. So when that happens, both sides send their opinion on their positions, and that’ s sent to the Board of Governors to determine the split that corresponds.”

Sulaiman acknowledged that the winner of Sept. 20 clash between George Groves and Christopher Rebrasse could be among the candidates to face Dirrell.

“There are many fighters contacting the WBC who want to fight for that title,” said Sulaiman. “We’re going go through the board to address who the mandatory challenger will be.”

Meanwhile, Chavez has been the topic of discussion between Top Rank Promotions CEO Bob Arum and Matchroom Sport promoter Eddie Hearn for a potential bout with IBF titleholder Carl Froch, who has scored consecutive knockouts over Groves.

Arum’s relationship with Chavez and Keane had soured over their failed negotiations for a potential bout with unbeaten WBO middleweight titleholder Gennady Golovkin.

Josh Warrington (18-0, 2 KOs) will face Davide Dieli (15-3, 5 KOs) for the vacant European featherweight title on Oct. 4 in support of a main event featuring former lightweight titleholder Ricky Burns against an opponent to be determined at the First Direct Arena in Leeds, England, according to Matchroom Sport.