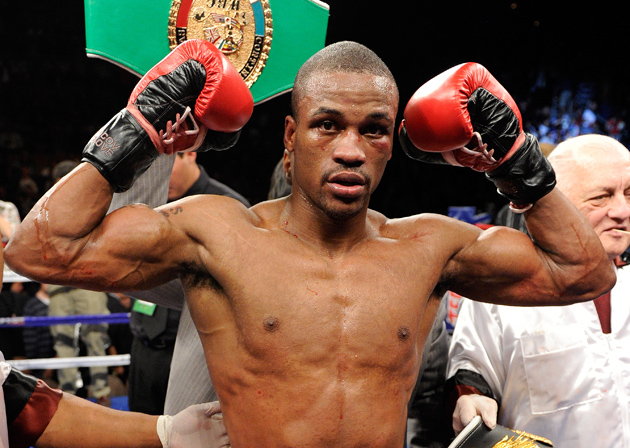 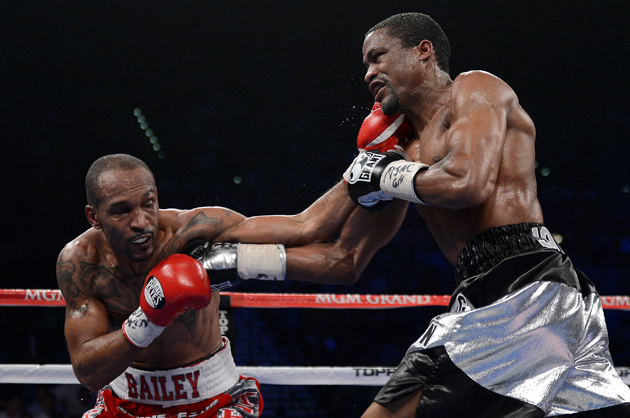 Mike Jones (right) and Randall Bailey exchange punches during their IBF welterweight title fight on June 9, 2012 in Las Vegas, Nev. Jones, who was stopped in Round 11, hasn’t fought since but he’s scheduled to return to the ring on Saturday. Photo by Kevork Djansezian/Getty Images

Former welterweight contender Mike Jones ends 26-months in the boxing wilderness this Saturday when he makes his comeback against Jaime Herrera in a scheduled 10-round bout at Bally’s Event Center in Atlantic City, N.J.

Jones put’s his extended absence from the ring down to a myriad of issues with his manager J Russell Peltz and promoter Top Rank. With those problems are now behind him he looks to get back into action.

The last time we saw Jones he was stopped by Randall Bailey for the vacant IBF welterweight title in the penultimate round on the undercard of Manny Pacquiao-Tim Bradley in June 2012.

Jones (26-1, 19 knockouts) was comfortably ahead when he was dropped by the devastating puncher in the 10th round before being dropped heavily again early in the 11th frame.

Initially Jones felt veteran referee Tony Weeks’ call to stop the fight was questionable. However, after re-watching the fight he now agrees it was the correct call by the referee.

“Maybe if he didn’t stop it at that time I wouldn’t have been able to come back strong like I am now,” Jones told RingTV.com on Sunday from his training base in Las Vegas. “I was winning the fight the whole time but it wasn’t my ‘A-game.’ I wasn’t fighting the best I can.

Jones makes no excuses and looks to comeback a stronger, better fighter.

“All in all I lost the fight. A loss is a loss, I took it as a learning experience,” said the 31 year old. “I saw the things I did wrong and I worked on things so I don’t make those mistakes again and I feel I’m better because of it.”

Here’s what the Philadelphia-born fighter had to say about his layoff, the welterweight division and hopes for the future.

Anson Wainwright – You have been out of action for 26-months. Tell us why this was?

Mike Jones – I wasn’t happy with the promoter or management situation. I wasn’t really pleased with how I was being paid and I didn’t agree with the money they wanted to pay me for the next fight after the title fight. So I pretty much wanted to make more money than they were offering me.

MJ – Russell Peltz, Top Rank, they wasn’t offering me the amount of money that I wanted. They were pretty much saying you’ve got to start from the bottom which is pretty much where I’m at now because I want to continue to work and I feel as though it’s time for me to get back out there.

AW – What have you done in that time?

MJ – The time I took off I believe it was pretty much necessary for me to get better as a fighter. I worked on my skills a lot. So I believe it’s the perfect time for me to comeback actually.

AW – Are you still campaigning at welterweight?

MJ – Yeah I’m pretty much a natural welterweight when I’m eating right which I am doing. I walk around at 152; it only makes sense for me to just fight welterweight.

MJ – I’m training with Miguel Diaz and Ismael Salas for this fight coming up. I’m still with Top Rank and Russell Peltz.

AW – So you worked things out with Peltz and Top Rank and are now happy with the deal you have in place?

AW – You return Saturday against Jaime Herrera. What are your thoughts about returning to action after so long?

MJ – (it’s) about time, a long time coming. I feel excited to comeback. I’m thankful I feel this way and I’m able to go back to work and do what I do.

AW – The last time we saw you lost to Randall Bailey. How difficult was getting over that loss?

MJ – It didn’t really take too long to get over the loss, about two weeks. The only thing that prolonged me from getting back in the ring was this situation with promoters and me not feeling like I was getting a fair shake just coming back and fighting stiffs. That’s pretty much the wrong way.

AW – You were criticised in that fight because it up until the end it hadn’t been an exciting fight.

MJ – I really don’t read too much into it. I don’t read too much on what people say. I can tell you first hand I thought I didn’t set my feet and fight the way I know how. I know you have to box a guy like Randall Bailey and stay away from the right hand and stay away from the right hand but there’s ways to do that without running around the ring. I could have done it much more efficiently than what I did. It’s something I made a mistake on and know what not to do.

AW – At that point you were one of the top welterweights in the world. You’d appeared on a couple of Manny Pacquiao cards. That’s a long way to fall. What has it been like for you to watch the division carry on without you?

MJ – I’m not frustrated, hats off to those guys. I’m not bitter because I know when I’m at my best nobody can beat me. I know I wasn’t at my best in my last fight. These guys out there they’re doing good, but I just want to get back and focus on being the best I can be and I know nobody can touch that.

AW – What are your thoughts on your division?

MJ – I enjoy it, guys out there fighting, there’s a lot of talent in boxing right now. My division is hot and I just want to get back in the mix and show the world I can be one of the best out there.

I believe it’s a good division. You’ve got guys looking to move up to welterweight. I think the division is hot right now.

AW – If we look at THE RING’s welterweight ratings, what are your thoughts on the top performers in the division?

C – Floyd Mayweather – I think Floyd Mayweather is a very technical fighter who has great skill, great defense, quick reflexes.
1 – Manny Pacquiao – Has terrific speed and tenacity. I can’t really judge his power but now I don’t see it that terrific anymore. He comes from different angles as a southpaw; he throws a lot of shots.
2 – Tim Bradley – Is an awesome fighter. He’s well put together, he’s tough, he has good boxing skills, he’s not a big power puncher but he gets the job done. He puts a little pressure on you; he can outbox you when he has to. He’s a pretty good all-round fighter.
3 – Juan Manuel Marquez – He’s a legend at the lighter weights. I think he was definitely a hall of fame fighter. He moved up in weight and he’s not the same fighter, he’s a smaller guy.
4 – Kell Brook – I can’t really assess Kell Brook because I really haven’t had chance to watch him too much. I didn’t even get to see the last fight (against Shawn Porter) because I was watching my fellow native of Philadelphia Gabe Rosado in the BKB show.
5 – Marcos Maidana – He’s just like a bull, you got to be the matador with him or be the bigger bull because he’s coming straight ahead speed and he’s trying to punish you.
6 – Shawn Porter – I haven’t seen too much of him but I know he’s a bull-rush type of fighter and tries to bully you in there.
7 – Keith Thurman – Is a good fighter, he’s fast, he’s got power; he’s one of the top guys right now.
8 – Robert Guerrero – Is a good fighter also, he’s a southpaw so he gives different angles. I think he should box better than he shows. I think he goes into a brawl a lot and I don’t think it’s good for him.
9 – Amir Khan – Is fast, real quick with his feet, quick with his hands, good offensive fighter.
10 – Devon Alexander – He’s a fast guy as well, southpaw, can box well, he’s not a big solid puncher but he can box and give good angles and has some good ring generalship.

AW – Of course you’re not looking past Herrera, but what is your plan of action with regards getting back into title contention?

MJ – The plan is just to get past Jaime Herrera. That’s the only thing I see right now because it’s been a long time since I fought and I can’t look past anybody right now. I’m fighting Jaime Herrera and I’m probably going to be fighting ring rust as well. The number one thing right now is get this ‘W.’

AW – You touched on that you watched the Big Knockout Boxing (BKB) event Saturday night. Did you enjoy it?

MJ – Oh yeah most definitely. It’s gonna catch on. It was a great night of fights, great night of boxing. It’s still boxing, you just have a smaller space to work with and you’ve got to fight.

AW – Is it something that interests you to get involved in?

MJ – My short term goal is to win a world title. My long term goal would be to defend that title numerous times and be looked at as one of the best fighters pound-for-pound.

AW- Are you targeting anyone or is it a little early to single anyone out?

AW – In closing do you have a message for the welterweight division?
MJ – I’m back.