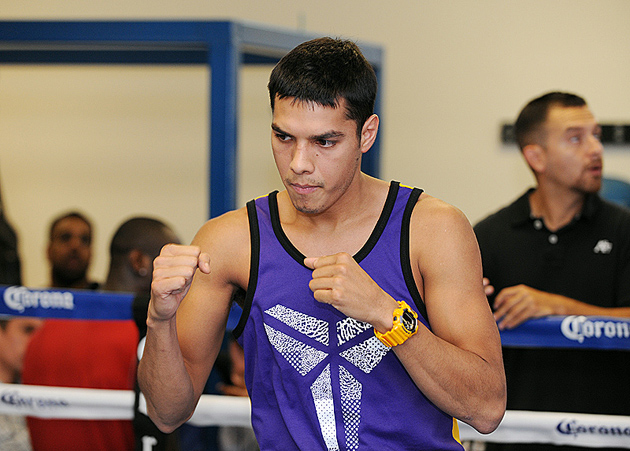 Although RING 140-pound champion Danny Garcia has been rumored to be mulling a similar move into the welterweight category, Sulaiman said that has not yet been confirmed.

Figueroa (24-0-1, 18 KOs) made his most recent defense last Saturday with a ninth round stoppage over Daniel Estrada in the first fight of a tripleheader headlined by Kell Brook’s welterweight title victory over Shawn Porter.

Sulaiman said two-division titlist Jorge Linares is now the organization’s mandatory challenger to Figueroa. In an earlier fight on the Porter-Brook card, Linares earned his sixth straight victory with a second round stoppage of lightweight Ira Terry.

Sulaiman had two conversations with Figueroa, one in which the fighter said he could no longer make the weight, then another in which he reconsidered.

“I had a telephone conference with Figueroa yesterday and he confirmed that he cannot make weight any longer and will be moving up,” said Sulaiman, during an interview with RingTV.com on Tuesday. “Linares is the fighter with rights after winning a final elimination bout vs. [Nihito] Arakawa and the WBC will begin the process to vote on the coming steps to fill the vacancy.”

On Wednesday, however, Sulaiman said Figueroa’s camp qualified his position.

“We have just confirmed that Omar spoke in the heat of the moment,” said Sulaiman. “The WBC will advise him to take an…examination and will give him plenty of time to make his final decision. So in the meantime, Omar is confirmed as WBC lightweight champion.”

Sulaiman, meanwhile, has scheduled a purse bid for Sept. 12 in Las Vegas in case a deal is not reached between Garcia, holder of its WBC belt and its number one-rated 140-pound contender Viktor Postol.

The bid will happen a day before RING champion Floyd Mayweather Jr. defends his WBA and WBC 147-pound belts against Marcos Maidana at the MGM Grand.

With his 11th round knockout of Turkey’s Selcuk Aydin in May, Postol, 30, won the WBC’s eliminator bout for the right to face Garcia, who is coming off a second round stoppage of Rod Salka in a non-title 142-pound bout on August 9.

Garcia is promoted by Golden Boy Promotions and Postol is co-promoted by Ukraine’s Elite Boxing and Top Rank Promotions, according to his manager, Vadim Kornilov.

“World champions who request moving to a different division have merits,” said Sulaiman, who said free negotiations for the Garcia-Postol bout were ordered last Friday. “We don’t know anything about Garcia moving up in weight. I also spoke to him after his last fight and he didn’t mention any plans of moving up.”

Kornilov said Postol is ready for Garcia but if Garcia should decide to move up in weight, Postol would be prepared to face hard-hitting RING number one-rated 140-pounder Lucas Matthysse of Argentina.

“In lightweight, Linares has the rights,” said Sulaiman, “and in super lightweight, Postol is also the one with rights after winning a final elimination by knockout over Selcuk Aydin. We will address each [situation] at the time it is factual.”

Neither Figueroa nor Garcia’s father and trainer, Angel Garcia, could be reached for an immediate comment.

IS MIKE JONES’ CAREER AT STAKE VS. JAIME HERRERA?

Former title challenger Mike Jones has new trainers for his return to the ring against Jaime Herrera on Saturday in the Grand Ballroom at Bally’s Event Center in Atlantic City, New Jersey. This will be Jones’ first fight in over two years.

In June 2012, Jones (26-1, 19 knockouts) was stopped by Randall Bailey in the 11th round of his failed bid to earn the IBF’s vacant welterweight title.

After falling to Bailey, Jones relocated to Henderson, Nevada, near Las Vegas, and settled on Miguel Diaz and Ismael Salas after working with a variety of trainers, including Floyd Mayweather Sr. and Eddie Mustafa Muhammad.

“Boxing is a mental game just as much as a physical one. When we first worked with Mike for this fight, we talked for a long time and worked on renewing his fighting spirit,” said Salas, who has worked with 10 titleholders as well as Jessie Vargas.

“He is a great fighter and he needs to think that, when he walks into the ring, he will be a powerful force. Mike is very strong and hits hard. He is in top condition. Just look at him. After two years off, you will see what hard work and mental toughness did for Mike. He’s ready to fight.”

“I like Ismael Salas and Miguel Diaz because they bring a positive attitude into the situation every time I come into the gym. We’ve pretty much gone back to the basics and worked on the things that work and we’re not trying to over-complicate things,” said Jones.

“They’re very knowledgeable in boxing and they’be been around a long time. Ismael Salas has trained a lot of world champions and Miguel Diaz, his name speaks for itself. So, I’m happy with the relationship we’ve got.”

For his fight with Bailey, Jones had requested eight-ounce gloves, contending that he wanted to face the very best of the fighter known for his powerful, lights-out right hand. Bailey was trailing by four, six and eight points on the judges’ cards and getting outboxed when he dropped Jones with right hands in the 10th and 11th rounds.

Jones attempted to rise but fell face-first back to the canvas and referee Tony Weeks waved an end to the fight at 2:52 of the 11th. Prior to facing Bailey, Jones had overcome rugged Sebastian Lujan by unanimous decision in December 2011, ending the Argentine slugger’s 12-fight winning streak.

“Mike’s career is at stake and from what I’ve heard, he is really pumped up about it. He needs to be the fighter that he once was but a little more aggressive this time,” said promoter J Russell Peltz.

“Mike is only a fight or two away from being right back in the mix with all of those welterweights that you see on the major pay stations, like the Shawn Porters and the Kell Brooks and the Mike Alvarados and the Ruslan Provodnikovs and all those guys. He could be right back in there with one, if not two, good outings.”

“I’m back now and I want to work. I let go of my pride and I’m ready to go. It’s not like it’s the perfect time but I’m ready to get right back into the boxing scene because it’s really hot right now in the welterweight division. I feel like I’m only one great performance away from a title shot, the way that the game is right now,” said Jones.

“I’m going to be in against a tough kid and he comes to fight. He wants to try to wear you down and throw a lot of shots. He’s a good fighter. I just want to go in there and give my absolute best, which is something that I haven’t done in a few fights. I just want to get back to doing what I’ve been doing and doing my best, the way that I started.”

Note: Quotes for Jones’ story from a release.

AUSTIN TROUT: “I REALLY NEED TO GET BACK INTO THE WIN COLUMN.”

Prior to facing Alvarez and Lara, Trout scored a career-best win in a unanimous decision over Miguel Cotto in December 2012 at Madison Square Garden.

“I think that have to try and look impressive in every fight but most importantly on Friday, I have to get the win,” said Trout, 28. “I really need to get back into the win column and get back to my winning ways and from there, move on and up the ladder and work my way back to the top.”

An Australian who will be making only his second appearance on American soil, Dawson, 36, is 6-0-1 with two knockouts since a unanimous decision loss to Frank LoPorto in Oct. of 2010.

“When we created Golden Boy Live!, our goal was to showcase up-and-coming fighters to fans eager to see the next generation of superstars,” said Oscar De La Hoya, founder and president of Golden Boy Promotions. “We have been thrilled by our partnership with FOX Sports 1 and FOX Deportes and look forward to continuing our collaboration for many years to come.”

“Fighting on the first Golden Boy Live! event against Giovanni Lorenzo was one of the biggest moments of my career,” said Jacobs, who was last in action for a first round knockout of Jarrod Fletcher on Aug. 9.

“To be at home in New York against a top contender and to win by knockout let me know that I was on the right track to a world championship. Congratulations on the one-year anniversary and here’s to many more years on FOX Sports 1,” Jacobs added.

After kicking off the series in the New York, Golden Boy Live! events landed in 13 different markets in 15 different venues from the House of Blues in Boston to the Alamodome in San Antonio and worked with various top local promoters in order to plan and execute the best events possible.

“Whether you’re a prospect or a contender, Golden Boy Live! gives boxers the national showcase they need to show their talents to fans and to the industry. This series has provided great opportunities for the fighters,” said Mike Battah, a prominent Texas promoter.

“These weekday events give boxers a great outlet in which to showcase their talents in front of a large audience and build themselves for that next step. These are competitive, evenly matched fights in great venues and I’m proud to be associated with it.”