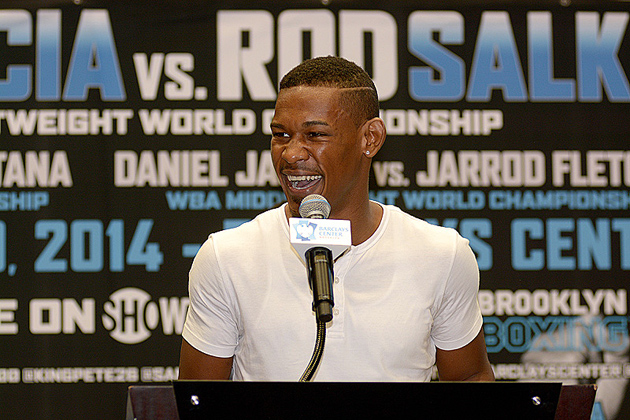 14
Aug
by Lem Satterfield
Oscar De La Hoya plans to personally thank Daniel Jacobs and Anthony Dirrell for “demonstrating courage” in surviving cancer when all three are at the StubHub Center in Carson, Calif. on Saturday, the Golden Boy Promotions president said during a Thursday interview with RingTV.com.

Jacobs (28-1, 25 knockouts), 27, will be on hand as a replacement for Paulie Malignaggi as a Showtime boxing analyst for Saturday’s tripleheader headlined by IBF welterweight titlist Shawn Porter’s defense against Kell Brook.

Cecilia, 39, passed wishing that her son would triumph in the Olympics, which he eventually did by earning the gold medal in a victory over Germany’s Marco Rudolph on Aug. 8,1992 in Barcelona, Spain.

“Watching Daniel Jacobs fulfill his dreams not only impacted the boxing community but he can impact anybody who has gone through those difficult times with cancer or who have been affected by cancer, whether it’s a family member or a loved one,” said De La Hoya.

“It’s going to be so special watching Anthony Dirrell up in the ring, especially knowing that Daniel Jacobs will be in the same building. It will show not just the fighters but people in general that the courage that they are demonstrating is not just courage inside of the ring but in living life. These fighters are demonstrating that it is possible to beat this disease.”