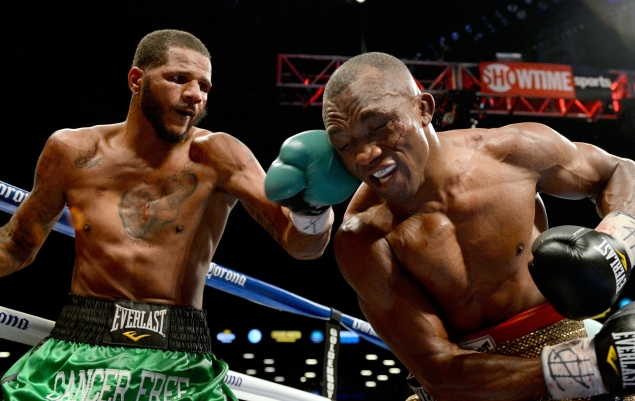 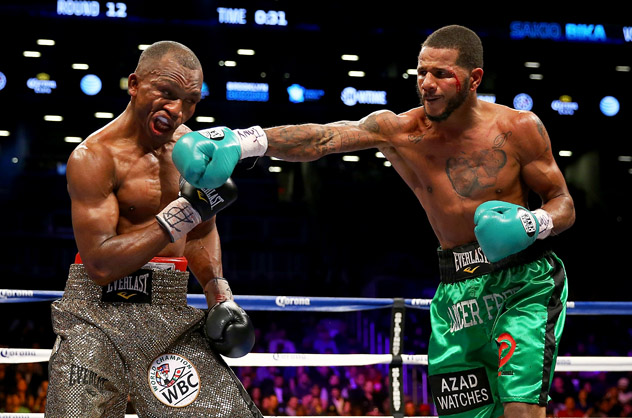 Anthony Dirrell (R) lands a right on Sakio Bika during their first fight in December 2013. The two super middleweights fought to a draw. Photo by Al Bello – Getty Images.

Sakio Bika managed to retain his WBC super middleweight belt with a draw against Anthony Dirrell in December, despite being dropped in the fifth round and penalized for fouling.

Bika (32-5-3, 21 knockouts), 35, said that he will be more aggressive in the rematch against Dirrell (26-0-1, 22 KOs), which will take place on Saturday at StubHub Center in Carson, Calif., in support of Shawn Porter’s IBF welterweight defense against Kell Brook.

The 29-year-old Dirrell, for his part, has vowed to duplicate the efforts of fellow cancer survivor Daniel Jacobs, who stopped Jarrod Fletcher in the fifth round on Aug. 9.

RingTV.com sought the opinions of 18 insiders as to what will transpire in Bika-Dirrell II.

Anthony Dirrell UD 12 Sakio Bika: There was nothing about the first fight that suggests we won’t see a virtual repeat, this time with Anthony Dirrell getting the decision he deserved last December over Sakio Bika.

Anthony Dirrell UD 12 Sakio Bika: It’s a tough rematch. Maybe, a dirty one. Sakio Bika is nothing if not tough and willing to do whatever. Bika, who suffered a debatable knockdown in the first bout, also was penalized for fouling in a split draw. Anthony Dirrell would be foolish if he’s not prepared for more of the same from Bika.

At 29, Dirrell has a potential advantage in youth over the 35-year-old Bika, who has faced the best in the super middleweight division. The guess here is that Dirrell learned from the first fight. If he knocks down Bika, he’ll capitalize.

If Bika plays dirty, he’ll make him pay on the cards. Don’t be surprised if Dirrell and his corner forewarn the referee about potential fouls in a tactical move that could account for the difference.

Sakio Bika SD 12 Anthony Dirrell: It’s been tough times for Australian boxers on the world stage in 2014. Alex Leapai, Daniel Geale, Blake Caparello, and Jarrod Fletcher have all recently fallen at the feet of superior fighters in title bouts.

Sakio Bika will put an end to the skid and get it done this time around against Anthony “The Dog” Dirrell. It sure won’t be pretty, and it’ll probably be another very dirty fight from “The Scorpion,” but that’s his nature.

As long as he doesn’t lose too many points or get disqualified, Bika should retain his WBC super middleweight championship with a well-earned split decision.

Anthony Dirrell UD 12 Sakio Bika: I really have no idea who wins this fight, and I’m basing my pick on who is likely to have learned more from the first encounter.

Anthony Dirrell must control distance and he can’t allow Sakio Bika to outwork him with rough house tactics and sloppy aggression. I think Dirrell can improve on his game, whereas Bika will do exactly the same as he did last time.

Forty punches per round isn’t going to be enough to beat the rugged Australia-based Cameroonian. If Dirrell picks up his pace to at least match Bika’s, his youth and speed will carry him the rest of the way home, and I think a rare second bite of the apple will cause Dirrell to do just that.

Sakio Bika SD 12 Anthony Dirrell: The first fight was a sloppy affair that deserved the draw it earned. Although Anthony Dirrell is the favorite, Sakio Bika’s toughness could be the difference-maker in the rematch.

Dirrell is more athletically gifted, but if he is unable to respond to the increasing roughhousing efforts of Bika, he may find himself simply being out-hustled.

Bika also has a significant power advantage and could rattle Dirrell late to take a few closely contested rounds. If Bika stays upright and doesn’t lose any points due to fouls, I think he can pull this one out.

He’ll instead look to pot-shot the wild-swinging, dirty fighter from Cameroon enough to walk away with a points win and a paper championship. Bika’s relentless pressure should cause Dirrell enough trouble, though, to enable Bika to retain his title.

Anthony Dirrell W 12 Sakio Bika: It’s tough for me to predict this fight. Several years ago I would’ve picked Sakio Bika without a doubt. But right now, based on his last couple of fights against Marco Antonio Periban and the first bout against Anthony Dirrell, it’s obvious that age is taking its toll on Bika.

I still think Bika did enough to win the first fight, but the controversial point deduction cost him the victory. Dirrell is a talented fighter, but he’s not close to the talent of his brother Andre. In addition, Anthony showed some mental weaknesses in response to Bika’s dirty tactics the first time around.

If Dirrell is tougher mentally and uses his skills, speed and athleticism, then he can probably outbox Bika for the decision. I expect another close fight, with the decision going in favor of Dirrell. 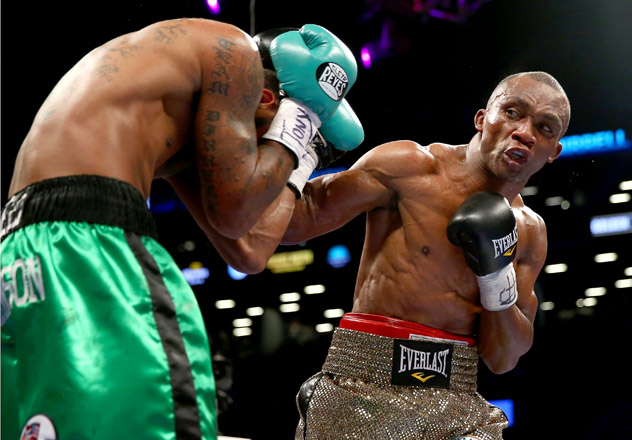 Sakio Bika TKO 10 Anthony Dirrell: Their first fight was a pretty wild affair, and plenty dirty. I expect more of the same. Sakio Bika is heavy-handed to the body, and I don’t think Anthony Dirrell is going to be able to withstand it.

I felt the blow that knocked Dirrell down late was legal, not a low blow as it was ruled. Bika will go more to a body attack this time and will break Anthony down, slowing him up and finishing him off.

Anthony Dirrell W 12 Sakio Bika: If Anthony Dirrell is committed to outboxing Sakio Bika instead of outslugging him, he may have a shot at this. Dirrell is a much better boxer and a more skilled and polished fighter, and if he can fend off Bika’s pressure early on, he may be able to pile up enough points to reach the championship rounds with a solid advantage.

The presence of a slightly more competent referee who could keep the dirty tactics and the wrestling to a minimum should also work in favor of Dirrell.

Anthony Dirrell SD 12 Sakio Bika: My gut is telling me that Anthony Dirrell wins the rematch. Their first fight, a draw, had fouls, a knockdown and a point deduction. Pretty much the norm for a Bika fight.

Dirrell is the younger man by six years. He hasn’t engaged in as many wars as Bika. I think Dirrell will box smart, get into a give-and-take slugging match, but ultimately do just enough to edge Bika by a split decision.

Bika can be and usually is outboxed, and if Dirrell stays on the outside and cuts down on the exchanges, he should win enough rounds to secure a close but clear decision victory.

Anthony Dirrell W 12 Sakio Bika: The experience of the first fight will have Anthony Dirrell more prepared the second time around. Sakio Bika will make it tough — he’s made it tough on almost everyone — but the younger man pulls away on the cards this time.

Sakio Bika W 12 Anthony Dirrell: I like Anthony Dirrell. I remember him putting on some excellent and particularly gutsy performances as far back as a solid 10 years ago as an amateur, and I would pick him to beat a lot of guys today.

I certainly think he has the skills and the determination to beat Sako Bika, too. But my gut feeling is that Bika’s strength and power, along with his extremely awkward and tough-to-look-good-against style is going to rule the night.

Fortunately, Dirrell gets the chance to redeem himself from their first encounter, and as long as he stays on the outside and boxes intelligently for the the full three minutes of each round, he should be the new WBC champion when the dust clears. This time, there will be no controversy.

Anthony Dirrell UD 12 Sakio Bika: I thought Anthony Dirrell beat Sakio Bika in their first encounter and I think he will beat him again. Dirrell will box like he did the first time around, but I don’t see him dropping Bika again.

Dirrell is underrated and fresh, while I feel Bika is past his prime. Dirrell’s jab and boxing ability will be the difference against the awkward and less skilled Bika. I look for Dirrell to win rather convincingly this time around.

Anthony Dirrell UD 12 Sakio Bika: For a fighter that isn’t well-loved, or even remotely popular, Sakio Bika has managed to get into spotlight fights in and around 168. He’s faced respectable opposition, stepping in the ring with the likes of Andre Ward, Lucian Bute, Joe Calzaghe and Sam Soliman.

Yet he’s never been seen as much more than a gatekeeper, a challenger. Bika has the ability to make a fight ugly, expose a prospect, and enough power to end a fight early. Anthony Dirrell, despite having gone through 10 months of chemotherapy, has somehow been able to remain busier than his slightly more well-known brother, Andre. They’re fairly similar fighters, preferring to control and stick from the outside.

But when Dirrell managed to knock down Bika in their first meeting, he subscribed to landing a knockout blow that allowed Bika to do work and grab the draw. Bika always comes in great shape, but his time at this top level is running out. He’s lost to Ward, Calzaghe, and Bute, all who were able to steer the fight while negating his lunging punches. This time around, Dirrell should find himself more composed, sticking to a boxing gameplan that will keep him on the outside and winning rounds.

Anthony Dirrell W 12 Sakio Bika: When these two met late last year Dirrell dropped Bika before boxing on the back foot and the fight ended as a draw.

This time he says he’s coming for the knockout, but that won’t be easy against someone as tough as Bika. That said I believe Dirrell will outpoint Bika, who last time out looked to be showing signs of slowing down.

By a tally of 13 to 5, the insiders favor Anthony Dirrell to dethrone Sakio Bika as WBC super middleweight titleholder.