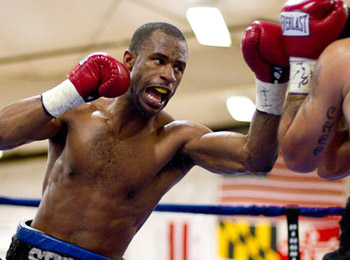 James Stevenson will face his most difficult challenge yet when he meets Sammy Vasquez Jr. on Friday in Pittsburgh.

Not only will he be fighting a hard-hitting southpaw who has knocked out his previous six opponents, but will do so in front of his opponents’ hometown fans.

Given that Stevenson (21-0, 14 KOs), 31, has faced nothing like the competition that Vasquez (15-0, 11 KOs) has, having fought only one boxer with a record above .500, the fight represents a major step up for a welterweight who has competed mostly in his native Baltimore.

It is out of the ring, however, that Stevenson’s resolve has been tested the most.

In 2011 during a routine jog to prepare for a fight, a stray dog viciously attacked Stevenson, requiring him to get more than 20 stitches.

Shortly thereafter, his father James “Woody” Stevenson Sr. passed away, as did his mother-in-law. Stevenson’s career stalled as he involved himself in consoling family members and providing additional financial assistance.

“I love boxing to death but that was a very difficult time in my life,” said Stevenson, of a period that lasted over a year between a unanimous decision over Jose Angel Roman in August 2011 and a first-round knockout of Dontre King in September 2012.

“I had to help keep my family together, and it was very hard on me, especially because of how close I was to my father. We had a great relationship and losing him was devastating.”

Stevenson will have his hands full with Vasquez.

In his last matchup, Vasquez scored knockdowns in the first, second and final rounds of a third-round stoppage against Jay Krupp, who had floored undefeated Sadam Ali in the first round of a unanimous decision loss a few months earlier.

So, in an event televised on Fox Sports 1 and promoted by Iron Mike Productions, Stevenson will be in search of a defining victory that will take his career to another level.

“He’s jut another guy to me. He breathes just like I do and puts on his boxing shoes one at a time. The guys I’ve seen him fight aren’t on my level,” said Stevenson, whose nickname is “Keep Em Sleepin.”

“So to be honest I think he’s taking a big step up, too. I’m not worried about the fight being near his hometown. Anywhere I go, I make it my hometown. Tomorrow night, I’m going to do what I do best which is put people to sleep.”