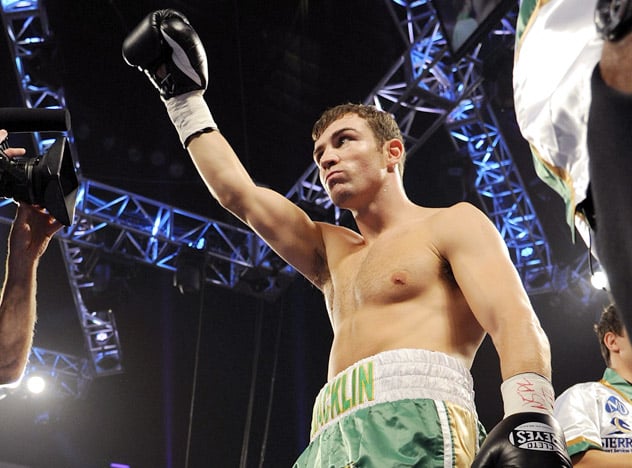 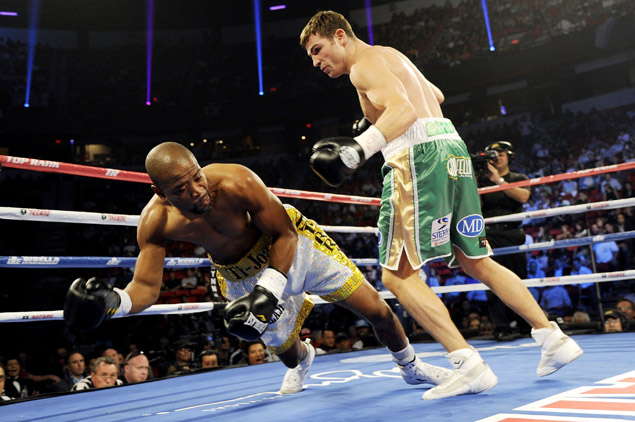 Matthew Macklin (R) knocks out Joachim Alcine in the first round of their September 2012 fight. Photo by Jeff Bottari/Getty Images.

Due to an injury suffered by Matthew Macklin’s lead trainer, Jamie Moore, the Dublin show on August 30 has been postponed until later in the year, Eddie Hearn of Matchroom Sport announced on Wednesday.

Macklin (30-5, 20 knockouts) was set to face Jorge Sebastien Heiland (23-4-2, 11 KOs) at the National Stadium in a WBC middleweight title eliminator as he looks to get back into contention for another world title shot. Macklin was last seen in action in a unanimous decision win over Lamar Russ in December.

In succession, Macklin’s losses since were to Felix Sturm by split decision in a failed attempt to win the WBA belt in June 2011, an 11th round stoppage loss to then-RING champion Sergio Martinez and by third round knockout against WBA titleholder Gennady Golovkin in June 2013.

“I am disappointed to have to postpone my fight but in the light of the circumstances and the disruption to my preparation it is the right thing to do,” said Macklin, 32, in a statement.

“Every fight at this stage in my career is of huge importance and being 100 percent for the night is vital. We will make an announcement shortly on a new date and I look forward to fighting in Dublin in 2014.”

Also slated for the card was 2012 British Olympic gold medalist heavyweight Anthony Joshua who will now fight at the Phones 4u Arena in Manchester on a Sept. 13 card headlined by RING number four-rated junior featherweight Scott Quigg against Paulus Ambunda, Hearn stated.

The hard-hitting Quigg is 7-0-2 with seven knockouts in his past nine fights and will be after his third consecutive stoppage win against Ambunda, a former titleholder.

Any tickets purchased for the Dublin show on through Matchroom Boxing will be automatically refunded to the cardholder.