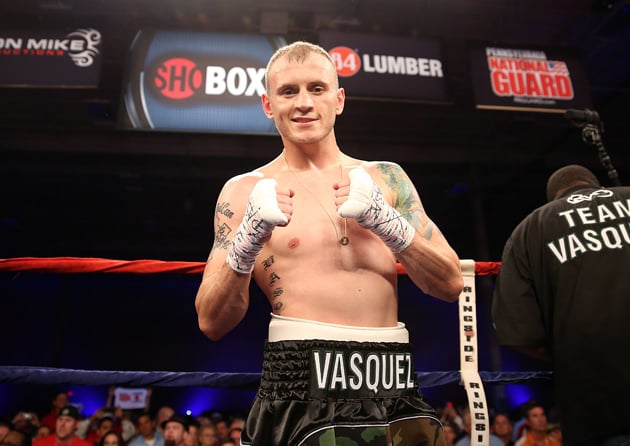 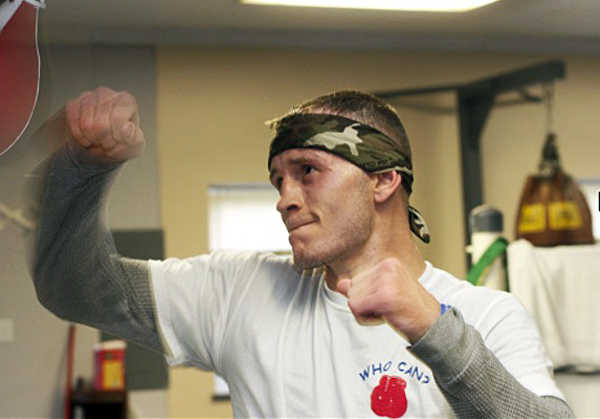 Welterweight Sammy Vazquez Jr. has been tearing through his opposition.

A southpaw, Vasquez (15-0, 11 knockouts) will be after his seventh consecutive knockout victory against James Stevenson (21-0, 14 KOs) on Friday in his fifth fight of 2014.

Promoted by Mike Tyson’s Iron Mike Productions, Vasquez will face Stevenson in the main event of a Fox Sports 1-televised card from the CONSOL Energy Center before Vasquez’s partisan fans in Pittsburgh, Pa.

“You, know, I’m just being me. I’m just a tough fighter. I like to separate myself from everybody else. But it’s just tough to say,” said Vasquez, who turned 28 in April.

“This fight, to me, I feel like I’m one of the best and that I should be in the top 10… I’m just not that type of fighter that lets a fight go that long.”

Berlin Abreu was 7-0 with five knockouts before Vasquez stopped him in the fourth round in February.

In Vasquez’s next bout in April, he scored a first-round knockout over fellow left-hander Juan Rodriguez Jr., who entered their fight at 11-0 with five knockouts.

In his last matchup in June, he Vasquez scored knockdowns during each of the first, second and final rounds of a third-round stoppage against Jay Krupp.

In his previous fight last September, Krupp had floored undefeated Sadam Ali in the first round of a unanimous decision loss.

“These guys that they’ve been putting in front of me, regardless of their record, and whether they’re undefeated or not, I’m doing what I’m supposed to do to these guys, and that’s knocking them out,” said Vasquez.

Vasquez said that he craves a test.

“I’d like to see somebody bring something new to the table, as well, because I haven’t been in deep waters yet, even though I’ve been training 10-to-12 four-minute rounds with little rest in between. I would like to see where I am in 10 rounds, but I haven’t even been in a full eight-rounder yet,” said Vasquez.

“But believe me, if the opportunity is there to get you out of there, I’m getting you out of there. You’ve got to look at it this way, if I can knock him out in the first round, then I can fight sooner. Maybe I can get two or three more fights in this year. So, the less damage that I can put on my body and myself, then the better for me and my future, and the faster I can get to a world title.”

Vasquez has been executing with such proficiency that he has frequently fought twice in the same month.

That was the case during when Vasquez debuted with a second-round knockout of Clifford Gregory in April 2012 that was followed by a unanimous decision over Damon Antoine 21 days later in the same month.

Vasquez knocked out Leandro Damian Albornoz in the second round on March 2, 2013 and then unanimously decisioned Hector Orozco 28 days after that.

Earlier this year, Vasquez stopped Jamar Freeman in the fifth round on Feb. 1 before knocking out Abreu on Feb. 22.

“If anything, I should work on my boxing,” said Vasquez. “I should set up the power punches and set up the knockouts. I should be working on different things. But these guys are not on my level. I tell that to everybody. So if I want to be among the elite, and I want to be up there with the elite, these these things that I’m doing to these guys is what should be happening. Come Friday, then, the same thing should happen.

“But I can’t sleep on anybody, and that’s for sure, because it only takes one shot from an eight-ounce glove right on the button. So a knockout can happen to anybody. You can get knocked by somebody who is 4-23, or you can get knocked out by somebody who is 21-0. You never know in this game. I always try to keep my game on point, and if the opportunity is there to get him out of there, I’m going to get him out of there. If it goes the distance, for 10 rounds, then it goes the distance.”

But Stevenson has faced nothing like the competition that Vasquez has, having fought only one boxer with a record above .500.

“You know, he’s 5-foot-11, and I’ve heard from people that I know that he’s a slick fighter, but every fighter is different, and styles make fights,” said Vasquez. “I want to test him and see where he’s at, because I don’t know what he does since I haven’t seen any video tape on this guy. I couldn’t find nothing on him. But, obviously, he hasn’t had the type of heat in front of him that I’m going to bring, either. He’s fighting somebody who is 15-0, but not just somebody who is 15-0 and who hasn’t fought anybody.

“That’s because I bring pressure, and we’re going to see what he’s doing to do with that type of pressure. I throw a lot of shots and that’s how I break people. I’m not knocking everybody out, I’m getting TKOs because they can’t handle the pressure because I throw too many punches for them. I do have power in both hands, and I’ve knocked people out, but I’m just such an aggressive fighter and in some aspects, I’m quick. If something is not working, then I can adapt and change up, so we’ll see. But I’m destroying these guys.”