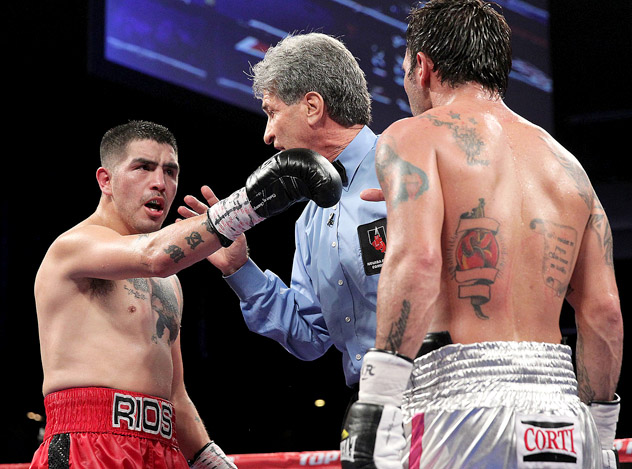 Rios vs. Chaves: The obvious place to focus is on the performance of Vic Drakulich. To be fair, the veteran referee had his work cut out in what quickly evolved into a wild, dirty fight between Brandon Rios and Diego Chaves on Saturday in Las Vegas. And, as the Nevada State Athletic Commission Chairman Francisco Aguilar pointed out on Sunday, I believe Drakulich tried desperately to maintain control of the fighters throughout the brawl. That said, he could’ve done a better job. Round 3: Drakulich took a point from Chaves for holding even though he appeared to have given him only one warning. Round 5: The fighters took a tumble and Drakulich took a point from Rios, whose actions didn’t constitute an obvious foul. Round 8: Chaves lost another point – and deservedly so – for pushing Rios in the face. Round 9: Drakulich disqualified Chaves at 1:26 for reasons that still aren’t clear. NSAC Executive Director Bob Bennett said Chaves was DQ’d for throwing an elbow. The replay seemed to show Chaves holding Rios’ head down and moving his glove back and forth on his face, which seemed to lend some credence to Rios’ contention that Chaves was gouging his eyes. Rios’ corner had complained about the tactic earlier in the fight. However, Bennett said Drakulich didn’t see the foul. So was it an elbow? Was it gouging? Or was Drakulich just fed up with fighters he couldn’t control? Of course, Drakulich’s frustration was understandable. However, he made a mistake by ending matters prematurely. I thought Chaves was the dirtier of the two but it was an ugly scrap all around. And there was only 4:34 remaining in the 10-round match. If I were the ref, I would’ve continued to do my best to keep it clean – however futile that might’ve been – and let them complete what had been a very close fight.

Kovalev vs. Hopkins: OK, here I go again. It has been announced that Sergey Kovalev and Bernard Hopkins will face one another in a light heavyweight title-unification bout on Nov. 8, two months before Hopkins turns 50. I will never again put anything past the Executioner-turned-Alien, who has proven me wrong too many times in the past. And I give him a chance against Kovalev because the Russian isn’t unusually quick or athletic, two characteristics possessed by Chad Dawson that seemed to befuddle Hopkins in 2012. Still, I fear for Hopkins. Kovalev (25-0-1, 23 KOs) isn’t a boxing wizard but his deep amateur background and seasoning as a pro have given him formidable skills – including the ability to cut off the ring – to go with absurd punching power. His knockout percentage is one of the best in the game. I don’t believe Kovalev will do to Hopkins what he did to poor Blake Caparello on Saturday in Atlantic City; the overmatched Aussie lasted only 4:47 of their scheduled 12-round fight. I do believe that Kovalev will eventually get to Hopkins (55-6-2, 32 KOs) and do enough damage on a consistent basis to either win a decision or score a late knockout. I just don’t want to see a true legend of the sport get seriously hurt, which I believe is a realistic possibility. And, yes, if Hopkins somehow manages to pull this one off, I’ll acknowledge that I was wrong again. I think I could live with that indignity.

Rios (32-2-1, 23 knockouts) hadn’t fought in nine months but didn’t look rusty to me. He looked exactly like the Rios we know, the one who moves perpetually forward, never stops throwing punches, gets hit a lot and entertains the crowd. I think he is as good – and limited – as he ever was. And he looked comfortable in his second fight at 147 pounds. ÔÇª Chaves (23-2, 19 KOs) is now 1-2 in his last three fights, having also been stopped by Keith Thurman in the 10th round last year. The Argentine showed a lot of ability and toughness against Rios, although his incessant holding frustrated both Rios and the viewers. He has what it takes to remain a welterweight contender. ÔÇª The Jessie Vargas–Anton Novikov fight on the Rios-Chaves card was disturbing both beforehand and afterward. First, I want to lodge my periodic protest: Vargas does not hold a major title. The WBA calls Vargas its junior welterweight world champion and Danny Garcia its super champion, meaning Garcia is the sanctioning body’s actual titleholder. The fact that some media outlets – including reputable ones – still recognize this WBA folly is ridiculous. Second, I have no problem with those who scored the fight in favor of Vargas. I do have a problem with the margin of victory on the official cards after a very close, competitive fight: 118-111, 118-111 and 117-111 for Vargas. The logical presumption is that Vargas, a resident of Las Vegas, received a hometown decision. The officials in Nevada should be embarrassed that their judges’ bias was so obvious. By the way, I don’t mean to knock Vargas. I think he’s a good, durable fighter even if he isn’t the biggest puncher in the world. ÔÇª Gabriel Campillo (24-6-1, 11 KOs) apparently isn’t finished. The former light heavyweight titleholder scored a minor upset when he stopped previously unbeaten Thomas Williams Jr. (17-1, 12 KOs) in five rounds Friday in Shelton, Washington. Campillo was 2-3 in his previous five fights, losing to Tavoris Cloud, Kovalev and Andrzej Fonfara.