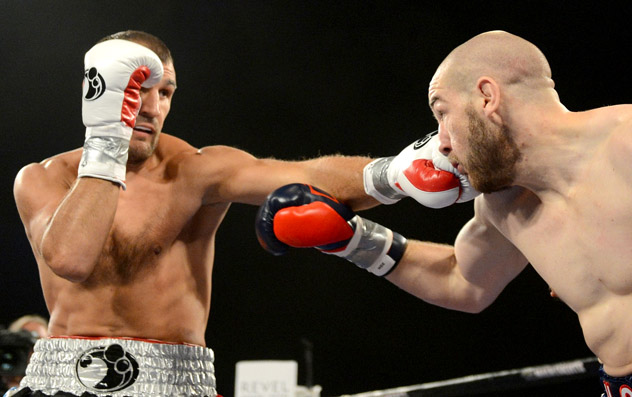 WBO light heavyweight titleholder Sergey Kovalev made short work of Blake Caparello on Saturday, stopping the previously unbeaten but unheralded challenger in Round 2 of their scheduled 12-round main event in Atlantic City, N.J.

Kovalev, a 31-year-old Miami-based Russian, suffered a flash knockdown in Round 1 when Caparello nailed him with a left hand to the forehead while his lead foot was on top of the defending titleholder’s lead foot. However, he quickly got back to his “Krusher” ways by scoring three knockdowns in Round 2.

Caparello (19-1-1, 6 KOs) remained in the corner where he was overwhelmed by an accumulation of punches. Referee Sparkle Lee waved the fight off at 1:47 of the round.

With the victory, Kovalev’s third defense of the WBO belt he won by stopping Nathan Cleverly last August, the power-punching Russian sets up the biggest fight of his career: a showdown with IBF/WBA titleholder Bernard Hopkins in November.

The legendary 49-year-old fighter was ringside to congratulate Kovalev after the fight.