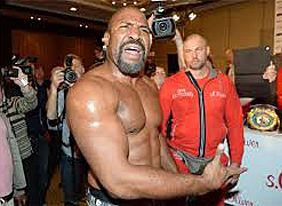 In a video that simply has to be seen to be believed, Shannon Briggs, the last American heavyweight titleholder, stormed the South Florida training camp of RING champion Wladimir Klitschko on July 29 and demanded a fight.

No U.S.-born fighter has held a heavyweight title since 2007 when Briggs briefly wore the WBO’s strap following a 12th-round stoppage of Sergei Liakovich in November 2006 before losing it by unanimous decision to Sultan Ibragimov seven months later.

During the latter portion of the video, Briggs enters the ring with the shadow-boxing Klitschko and begins dancing around him, simultaneously taunting him.

At that point, Michael Moorer, a former heavyweight titleholder, stepped between them and pushed Briggs backward before escorting the still-shouting fighter from the gym.

Klitschko was last in action for a fifth-round knockout against Alex Leapai in April.

The 33-year-old Pulev, who stands 6-foot-4 to Klitschko’s 6-6, was last in the ring scoring a third-round knockout victory of Ivica Perkovic in April.

Lightweight Tommy Coyle (19-2, 8 KOs) and middleweight John Ryder (18-1, 10 KOs) will face opponents to be determined in support of a main event featuring middleweight Matthew Macklin against Jorge Sebastian Heiland at the sold out National Stadium in Dublin, Ireland on August 30, Eddie Hearn of Matchroom Sport announced on Thursday.

ANTON NOVIKOV ON JESSIE VARGAS: ‘I PLAN TO WIN EVERY ROUND’

Officials were chosen last week for Saturday’s junior welterweight bout between Jessie Vargas and Anton Novikov at the Cosmopolitan in Vargas’ home town of Las Vegas, a fight that supports the welterweight main event between Brandon Rios and Diego Chaves.

Although referee Kenny Bayless and judges Burt Clements, Dave Moretti and Glenn Trowbridge are all from Nevada, Novikov (29-0, 10 knockouts) vows to render them irrelevant.

“I am not worried about hometown scoring,” said Novikov, 26, during a Wednesday media day in Las Vegas. “I plan to win every round.”

“They now call me ‘The Pride of Las Vegas.’ It means a lot to me…styles make fights and this fight against Novikov is going to be a rough one. He’s an extremely well-conditioned undefeated fighter who is left-handed. My trainer, Ismael Salas has given me a game plan to deal with Novikov and the direction he moves,” said Vargas.

“I won the world title against a left-hander and here we are again. The big thing is that we are fighting in our hometown. I am very excited about that. I am used to fighting against great fighters. As an amateur, I boxed for the Mexican national boxing team and took on the best American fighters. So I’ve been in the ring with big punchers and with left-handers.”

Meanwhile, Rios (31-2-1, 23 KOs) will try to notch his first win in nearly two years against Chaves (23-1, 19 KOs), having last been in action for a unanimous decision loss to Pacquiao in November.

“This is my biggest, most important fight. I am more determined and focused,” said Rios, 28. “I know what this fight means. This is a serious fight.”

Rios failed the post-fight drug test after losing to Pacquiao and was suspended for five months.

“I we went back to old-school training,” said Rios. “I ate better; I trained better and I listened better to my trainer, Robert Garcia. I know what it takes to fight like a champion.”

Chaves had knocked out five consecutive opponents before a 10th-round stoppage loss to Keith Thurman in July. The Argentine bounced back with a third round technical knockout of Juan Alberto Godoy in February.