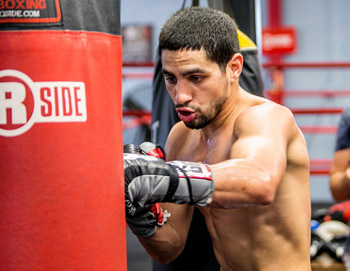 RING junior welterweight champion Danny Garcia said that he is “a lot more energized” as a result the 142-pound catchweight for his Aug. 9 non-title fight with undersized Rod Salka.

Garcia spoke during a national conference call with media members on Wednesday.

“I feel a lot more energized. Usually, at this time, when I gotta be at 140, I feel a little bit weak from losing the weight and maintaining, skipping meals and stuff like that,” said Garcia (28-0, 16 knockouts), who is coming off a disputed majority decision victory in March over the Mauricio Herrera and will be making his third appearance at Barclays Center in Brooklyn against Salka (19-3, 3 KOs).

Garcia’s appearance at Barclays will be his third in five fights, having earned a fourth-round knockout of Erik Morales in October 2012 and a unanimous decision over Zab Judah in April 2013.

Prior to facing Herrera in Puerto Rico, Garcia unanimously decisioned Lucas Matthysse, dropping him in the 11th round last September.

In May 2013, Peterson, 30, was knocked out for the first time in his career by Matthysse, being dropped him three times during a third round stoppage loss in a non-title bout. Peterson bounced back to defend his belt by unanimous decision against Dierry Jean in January.

Peterson, like Garcia, is advised by the powerful Al Haymon.

“After I fought that night [against Jean,] everybody that interviewed me, I let them know that I wanted to fight Danny Garcia next, because, that’s what the fans wanted to see, and for me, if the fans want to see me fight Danny, then I’ll push for that fight, and that’s what I did,” said Peterson, who is 5-1-1 with three stoppage victories since falling by unanimous decision to two-division titleholder Tim Bradley as a 140-pounder in December 2009.

“It just didn’t happen. At the end of the day, I’m going to end up fighting a tough fighter in Edgar Santana, and, hopefully, it can happen next time. It’s boxing. It’s a business. Again, if I can win this fight, then, win or lose, that’s the fight that I want to see happen. Of course, me winning the fight would make it that much more pleasing because I would leave with the title. Hopefully, it can happen. It’s the biggest fight we can make in this weight class, and it’s a fight that the fans want to see in this weight class, and I’m willing to do it.”

Instead, Garcia will fight Salka, who dropped previously unbeaten Alexei Collado with a third round left hook on the way to an upset unanimous decision victory in April.

Among his past eight wins, Garcia owns decisions over former titleholders Morales, Judah, Kendall Holt and Nate Campbell, as well as stoppage victories over Morales and former beltholder Amir Khan.

“He’s picked all of my fights, so I never question him about any decisions, I just accept the fight and my job is to train hard and to go in there on Aug. 9 and give the people what they want, and that’s a great performance and a great fight. At the end of the day, my style brings out the best in my opponents, so I’m looking forward to an action-packed fight on Aug. 9, and I can’t wait.”

In regard to Peterson, Garcia, 26, said that he would eventually like the fight.

“At the end of the day, it’s what Al wants, regardless. I can say what I want. Right now, I’ve got Aug. 9, and I can’t look past anybody. Same with Lamont Peterson,” said Garcia.

“He can’t look past Edgar Santana. So at the end of the day, we’ve both got to get these victories. But if that’s what they want at the end of the year or the beginning of next year, then we can do a unification bout.”

Garcia fought as an overwhelming underdog against both Khan and Matthysse. A poll of RingTV.com’s experts chose Khan to defeat Garcia by a vote of 20-to-1, while the insiders selected Matthysse over Garcia by a margin of 30-4.

Garcia will look to have a similarly impressive performance against Salka.

“It’s a fight. He’s got two hands, I got two hands, it’s going to be a fight…It’s going to be a great fight. Good media is good media, and bad media is good media, as long as they’re keeping me relevant. We’re going to go in there on Aug. 9 and give the fans a great fight. My fans are always going to be my fans, regardless. Danny Garcia fans support me regardless. I can’t talk for other people, but my fans love me and the back me up, no matter what.”

Prior to facing Collado, Salka had previously been in the ring in December for a disputed majority decision loss at junior welterweight to Ricardo Alvarez, the older brother of Mexican star Canelo Alvarez.

“We obviously did want to stage the fight that all of the media was suggesting, Peterson versus Garcia, but it wasn’t a fight that was available. It just wasn’t available. It couldn’t be made, so Salka, obviously, he’s well deserving, and he has a Rocky-like story. So we put on a tremendous card from top to bottom,” said Oscar De La Hoya, president of Golden Boy.

“With Daniel Jacobs, and with Peterson and with all of these big-name fighters, this is a perfect fit for the Barclays Center, and it’s like Danny Garcia said, you have two fighters who are going to be ready come Aug. 9, and the leather will be flying. It’s going to be a tremendous show.”

SANTANA: PETERSON MADE A ‘BIG MISTAKE’ CHOOSING HIM

Santana, 35, is a New York City-based Puerto Rican boxer who has won his last three fights, all by stoppage since falling by unanimous decision to Manuel Perez in February 2012. He was last in action for a first-round knockout of Michael Clark in November.

“I am happy to be the one. I guess that they picked me out of the bunch. I feel that they committed a big mistake,” said Santana. “I’m going to be ready to lay it all on the line that day. I’m going to be there to fight, no doubt about that.”

JACOBS TO BE ‘SUPERMAN’ IN ‘OPPORTUNITY OF A LIFETIME’

Jacobs, 27, will be after his eighth consecutive stoppage in as many straight victories since being stopped by Dmitry Pirog in a failed bid to earn the WBO belt in July 2010. Jacobs was last in action for a first round knockout of Milton Nunez, whom he dropped three times in March.

A Brooklyn native who is nicknamed “The Miracle Man” due to the fact that he is a cancer survivor, Jacobs is 2-0 with as many knockouts at Barclays.

Fletcher, 30, has won six consecutive fights, three by stoppage, since his sole loss by second round knockout to Billy Joe Saunders in September 2012.

Fletcher is coming off a unanimous decision victory over Max Bursak in February on the undercard of a seventh-round knockout by WBA 160-pound titleholder Gennady Golovkin (30-0, 27 KOs) over Osumanu Adama card, who was floored three times.

Although Jacobs-Fletcher is being billed as a WBA “regular” title bout, RingTV.com only recognizes Golovkin, who is that organization’s “super champion.”

“It doesn’t matter to me. A champion is a champion,” said Jacobs, who, in victory over Fletcher, would consider a fight with Golovkin, but would prefer doing so after facing WBO beltholder Peter Quillin, who, like him, is advised by Haymon. “A secondary champion or the first champion, it doesn’t matter to me. I have an opportunity to be a world championship. It’s not my job to make the belt…It’s my job to just be ready to fight whoever is put in front of me, and whatever title I get, I’m very grateful for it.

“I think that it would be huge, but, for me. It would be an opportunity that I would love to have to fight him. But he’s already a superstar, and I would like the opportunity to be a superstar myself, so I would if I could maybe get a Peter Quillin or somebody like that, and then go up to a Gennady Golovkin, then that’s something that I would look forward to doing. But I’m not really in control of who I fight. If I had it my way, I would probably take a couple of fights to solidify that spot and build my name before we go ahead and make that fight.”

Jacobs was diagnosed with osteosarcoma, an aggressive form of cancer that manifested itself as a walnut-sized tumor wrapped around his spine, in May 2011.

The tumor had damaged his nerves and caused partial paralysis in his legs. Doctors advised him to quit boxing. But after having the tumor removed and going through rehabilitation, Jacobs resumed training.

Jacobs returned to the ring on Oct. 20, 2012 with the win over Luteran in the inaugural boxing show at Barclays Center in Brooklyn.

“I had hopes and aspirations of one day being able to get back into the ring, and once I found out that the Barclays Center was having fights, that was my biggest motivation was to be there for the first event. To have this opportunity to win a world championship, let alone to have it be possible in my own back yard, that is the opportunity of a lifetime,” said Jacobs.

“I think about it all the time. I envision myself with my hands being raised, and, of course, you envision the announcer saying, ‘And, the new…’ I get emotional just thinking about it. So, for me, that night will be for my family, and it will be a night to remember to have my hand raised in victory. I never would have dreamed of this opportunity to fight for the WBA championship in my back yard. It’s truly, truly an honor.”