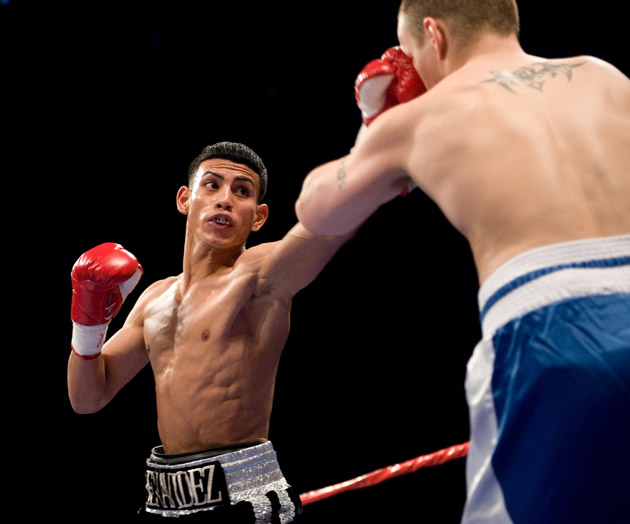 PHOENIX ÔÇö The homecoming didn’t last long. Jose Benavidez made sure of it.

In about the time it takes to shake hands, Benavidez said goodbye to Henry Auraad Saturday night with a first-round stoppage that might allow the Phoenix welterweight to say hello to a future beyond the prospect stage.

Meet-and-greet was over in 110 seconds.

Benavidez (21-0, 15 knockouts) blitzed Henry Auraad (16-9-1, 13 KOs), an unknown Colombian, first with a jab that landed with unerring precision and unmistakable power. Auraad stumbled forward like a guy about to fall off a tossing deck into turbulent waters. As he did, he ran straight into a right hand from Benavidez. Somehow, Auraad stayed on his feet. But not for long.

Benavidez immediately attacked, burying Auraad beneath a storm of punches and putting him on the canvas. Auraad got up and took a couple of shaky steps in a drunken stumble. At 1:50 of the first, it was over. Benavidez delivered a TKO and a message that he wants tougher challenges.

“It’s time, time for me to step up,” Benavidez told RingTV.com.

The swift stoppage put an exclamation point on Benavidez’s statement, though his dad and trainer, Jose Benavidez Sr., had hoped for a few more rounds.

“Five or six maybe,” Benavidez Sr. said. “I was hoping we’d get in some more work.”

But the son had a different idea all along.

“I just wanted to knock him out,” Benavidez said after only his second bout in his hometown. “What do they say: They don’t pay for overtime.”

Benavidez has been mentioned as a possibility for some of the bigger names already on the sport’s marquee. A bout with Brandon Rios was discussed, according to Top Rank matchmaker Bruce Trampler. But HBO said no to that one.

“That’s because I’ve never been scheduled for even 10 rounds,” said Benavidez, who appears to be past the hand problems that had put his career on hold. “But 10 rounds, that’s what I want. Big names are what I want. Fighting a Rios is what I need.”

In the co-main event, featherweight Oscar Valdez (12-0, 11 KOs), another Top Rank prospect, won a unanimous decision over Juan Ruiz (23-14, 7 KOs) that was as one-sided as it was bruising. Ruiz rushed at Valdez, a two-time Mexican Olympian who went to grade school in Tucson. He clinched. He did it all while also taking one big shot after another.

“Yeah, it was tough,” said Valdez, whose manager, Frank Espinoza, says the young prospect can be the best featherweight he has ever managed. “But you learn from tough fights, especially from a guy like [Ruiz].”

Before the “Solo Boxeo” telecast, Trevor McCumby (16-0, 12 KOs), a Chicago light heavyweight who lives in Phoenix, fought a no-name. Michael Gbenga’s name wasn’t even on his own trunks — at the center of the beltline there was just a blank panel. No name, no chance either against McCumby, who won all six rounds on the cards and knocked down Gbenga (15-16, 15 KOs), of Baltimore, in the fifth with one of several lefts that landed throughout the fight.

Best of the undercard:

┬À Phoenix junior lightweight Keenan Carbajal (4-1-1, 3 KOs) threw a left hand that had to remind many in the capacity crowd of another Carbajal, Michael, who in the 1990s stormed through the junior flyweight division and into the Hall of Fame with a similar punch. It was short, fast and deadly, landing 26 seconds after the opening bell for a knockout of Edgar Pinedo (1-1).