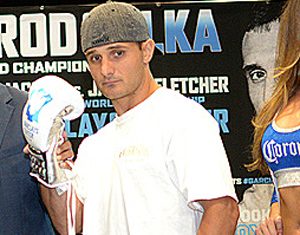 Rod Salka believes he will beat RING junior welterweight champ Danny Garcia on Aug. 9 despite the fact that he was already considered an undersized foe before the non-title bout was renegotiated to a 142-pound catchweight.

Garcia (28-0, 16 knockouts) is coming off a disputed majority decision victory in March over the crafty Mauricio Herrera, and Salka (19-3, 3 KOs) dropped previously unbeaten Alexei Collado with a third round left hook on the way to an upset unanimous decision victory in April.

“It doesn’t make a difference. I’m the smaller guy, regardless. It’s not like he can add 20 pounds of muscle in the next couple of weeks. It just means that he doesn’t have to kill himself as much to get down. Whatever. It’s still the same guy in there, and if they want to pay me to come in heavier, that’s okay with me, too. It’s not like I wake up weighing 140 pounds. I have to cut to that weight, too.”

Prior to facing Collado, Salka had previously been in the ring in December for a disputed majority decision loss at junior welterweight to Ricardo Alvarez, the older brother of Mexican star Canelo Alvarez.

Salka will look to use similar tactics to those used by Herrera against Garcia, and also said that he will benefit from his experience gained against Garcia during an amateur bout that he believes he should have won.

“It was maybe about a week ago that, once we realized that it wasn’t going to be for the title, he decided that he didn’t want to make 140,” said Salka, of a weight increase that was confirmed by Golden Boy Vice President and matchmaker Eric Gomez. “So we just renegotiated the contract. He wanted more pounds, so he and I renegotiated a separate amount per pound thing on that. I’m making more money all around.”