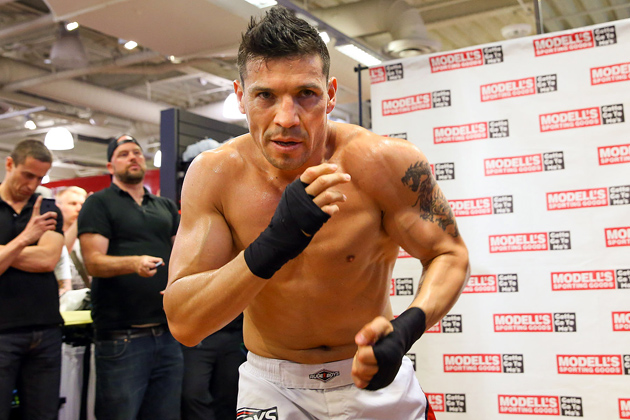 Sergio Martinez will fight on.

Martinez, who suffered a 10th-round stoppage loss to Miguel Cotto for the RING and WBC middleweight championships, has decided to continue his boxing career following lengthy discussions with members of his team, the fighter announced on Saturday.

“[Business manager] Miguel De Pablos and I met with Sergio at his home in Madrid, and he says he is 100 percent healthy and ready to do what it takes to return to the very top of boxing,” said Sampson Lewkowicz, advisor of Martinez who anticipates a return against a top 10 contender in the near future.

Martinez (51-3-2, 28 knockouts), who turned 39 in February, had to rise from the canvas during each of his previous two unanimous decision victories over Julio Cesar Chavez Jr. in September 2012, and Martin Murray in April 2013 while also having suffered knee injuries, among others, as a result of those bouts.

Lewkowicz said Cotto landed a telling left hook a minute into the fight, after which Martinez was dropped the first of three times in the initial round.

“He got caught with an unexpected punch and it disconnected his body. It happens in boxing, especially against a puncher like Miguel Cotto,” said Lewkowicz. “If you look at the tape of the fight, look how slow his hands were. A bad knee doesn’t cause your hands to slow. It was clear it was not the real Sergio in the ring that night.”

In between the ninth and 10th round against Cotto, Martinez’s trainer, Pablo Sarmiento did not allow the boxer to emerge from his stool, instead, electing to stop the fight. According to translations during HBO’s replays of the exchange between Sarmiento and Martinez, the trainer told the boxer “Your knees are not working right, Sergio,” and, “Your knees are not responding.”

“Against Cotto, Sergio was badly hurt in the opening round from the first left hook that landed. After that, he remembers only pieces, and had very little control of his body and especially his legs. He fought entirely on instinct. It was the worst night of his entire career, and he is coming back to prove he is a superstar fighter who just had a bad night.”

Lewkowicz said Martinez will first undergo a full battery of head-to-toe testing from top specialists in New York, but pending full medical clearance, the former champion will be returning to the ring on a mission.

Martinez entered the Cotto fight at 7-0 with four knockouts since falling by majority decision to Paul Williams in December 2009, having avenged that loss by stopping Williams in the second round in November 2010.

Among Martinez’s other triumphs is a decision victory over Kelly Pavlik to win the WBC’s belt for the first time, and knockouts of former titleholders Sergei Dzinziruk and Darren Barker as well as one over contender Matthew Macklin. Martinez also battled to a draw with two-time beltholder Kermit Cintron.

After the Chavez fight, during which he regained the WBC’s belt and also earned the WBO’s title, Martinez received eight stitches to repair a cut over his left eye, two staples in his head, and suffered from both a broken left hand and torn ligaments in his right knee, the latter of which required surgery to repair.

Martinez required a second surgery after having damaged the knee injury, later determined to be a torn right meniscus, during his triumph over Murray.

Martinez is 35-2-1 with 22 knockouts since being stopped in the seventh round by Antonio Margarito in February 2000, and has been middleweight champion for four years since defeating Pavlik by unanimous decision in April 2010.

“Obviously June 7 was a terrible night in the ring for Sergio Martinez. But he says he can still do it, and that he’s totally committed to winning back his title, so I stand behind him,” said promoter Lou DiBella.

“He’s already come back to do great things after a stoppage loss to Antonio Margarito earlier in his career, and he’s positive he can do it again. So we’re going to put him in with someone who can get him in line for a title shot and see what he can do. If he doesn’t look to be the same fighter anymore, I will be the first to admit it, but he deserves the chance to prove it was just an off-night in an otherwise stellar career.”

Emanuel Taylor rose from an eighth-round knockdown to secure a unanimous decision over Karim Mayfield at the Paramount Theater in Huntington, N.Y. on Friday night.

In victory, Taylor (18-2, 12 knockouts), who is 23, rebounded from February’s unanimous decision loss to Chris Algieri, who subsequently dethroned Ruslan Provodnikoc for the WBO belt last month and will challenge WBO welterweight titleholder Manny Pacquiao on Nov. 22 in Macau, China.

Mayfield (18-2-1, 11 KOs) was looking to rebound from a unanimous decision loss to Thomas Dulorme in March after having vanquished Christopher Hernandez by eighth-round knockout in September and Mauricio Herrera by unanimous decision in October 2012.

A co-feature between welterweights Cletus Seldin (13-0, 10 KOs) and Bayan Jargal (17-5-3, 10 KOs) ended in a no-contest after Jargal suffered a severe cut over his right eye in the third round from a ruled accidental head butt.