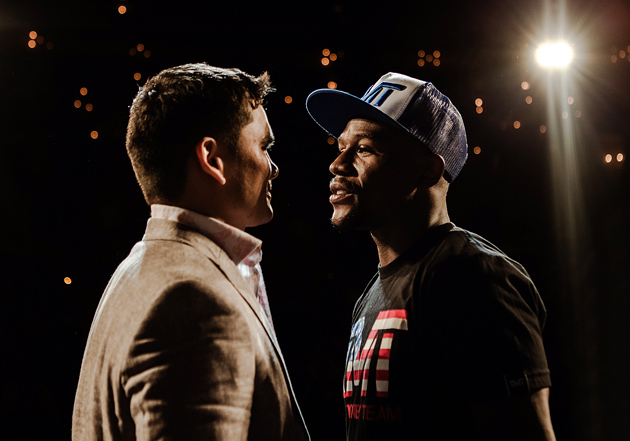 Marcos Maidana was staring face-to-face with RING welterweight champion Floyd Mayweather Jr. for the fourth time in two days during their press conference on Tuesday evening in San Antonio.

Apparently, Maidana had grown tired of looking at Mayweather.

Click here for the video of the Mayweather-Maidana skirmish

So the square-jawed Argentine forced his adversary backward by pushing his right hand into the chest of Mayweather, who, nevertheless, regained his ground with two forward steps and was in Maidana’s face yet again.

Once more, Maidana placed his hand on Mayweather’s chest only to have his his rival quickly slap it down with his own left hand. Maidana’s third action was an emphatic double-fisted thrust to the chest of Mayweather, who responded with a right-hand push of his own.

That touched off a brief skirmish which was defused by Mayweather Promotions CEO Leonard Ellerbe and Golden Boy Promotions vice president and matchmaker Eric Gomez.

“Floyd’s been kind of offending Marcos a little bit and trying to get under his skin by telling him a bunch of things and getting really close to him and all of that,” said Gomez, who wrapped his arms around Maidana and hastily ushered him away from Mayweather.

“So Marcos finally just said that he had had enough. So I asked Maidana what happened and he said he told [Mayweather], ‘You’re getting too close to me. Get away from me.’ He told me that he kind of told him in Spanish, ‘Get away from me.’ I asked him afterward and [Maidana] said, ‘He was getting to close to me and I don’t like that. It’s like he wants to give me a kiss or something.'”

As part of an ambitious five-city tour that culminates with Los Angeles on Thursday, Mayweather and Maidana already had visited New York and Washington, D.C., on Monday, followed by Chicago on Tuesday afternoon.

“It’s been really crazy and they’re tired already. That’s what I think. I think that has something to do with it,” said Gomez. “Really, nobody has really slept. It’s been nonstop. We finally got our good night’s sleep last night.”

Gomez described the fans in San Antonio as partisan to Maidana.

“They were pro-Maidana,” said Gomez. “A lot of the Mexican fans have embraced him and they really like the way that he fights.”

Mayweather (46-0, 26 knockouts) and Maidana (35-4, 31 KOs) will meet in a Sept. 13 rematch at the MGM Grand in Las Vegas, site of Mayweather’s majority decision victory that added Maidana’s WBA welterweight title to his RING and WBC belts.

DAVID PRICE OUT UNTIL DECEMBER WITH HAND INJURY

British heavyweight David Price will be out of action until December following surgery on Tuesday to repair a damaged tendon in his right hand, Sauerland Events announced on its website on Wednesday.

Performed by renowned hand specialist Mike Hayton, the operation was deemed a success.

“I picked up a hand injury in my last fight against [Yaroslav] Zavorotnyi [in June]. It had been four weeks and there had been no real improvement. So I went to see Mike Hayton and we decided to open it up and see what the problem was. There was a split in the tendon and some scar tissue that had to be removed. It is still a little sore now but Mike was pleased with how it went and he is confident that my hand will be back to full strength in no time,” said the 6-foot-8 Price.

“Realistically, we will be looking at December before I am able to get back in the ring. I am going to stay in the gym. There is still a lot of work I can do. I will just need to avoid any impact training for the time being. I am glad I have got this sorted now. There was the option to take a fight in September, get an injection and fight through the injury but then you run the risk of making it worse or causing some permanent damage.”

Prior to Zavorotnyi, Price had scored a third round knockout of Ondrej Pala in Denmark in April that followed a first-round stoppage of Istvan Ruzsinszky in January.

“There is no doubt that I will benefit from the additional time in the gym and come back even stronger. It is a minor setback,” said Price. “But by the end of the year, I will have boxed four times in 2014 and that is a massive step in the right direction. Next year, I will be ready to take on anyone.”

WBO junior middleweight titleholder Demetrius Andrade called himself “the best in the world” after last month’s seventh round stoppage of England’s Brian Rose, whom he floored once each in the first and third rounds.

On Wednesday, Andrade, 26, emphasized his desire to face Saul Alvarez, who is coming off Saturday’s split decision win over southpaw Erislandy Lara in a 155-pound bout.

“I am ready and willing to fight him for my title,” said Andrade in a release by his promoter, Star Boxing. “I just hope he would be prepared for the beating I will put on him.”

Andrade has also declared himself ready for the likes of Mayweather Jr., four-division titlist Miguel Cotto and WBA middleweight titleholder Gennady Golovkin, if not junior middleweights Alvarez and Lara.