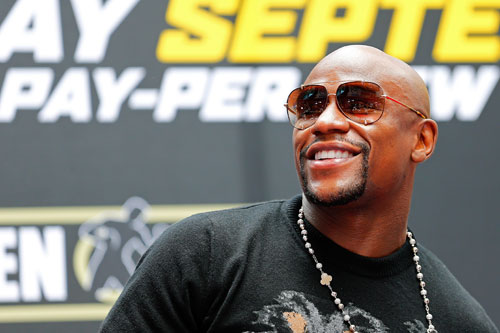 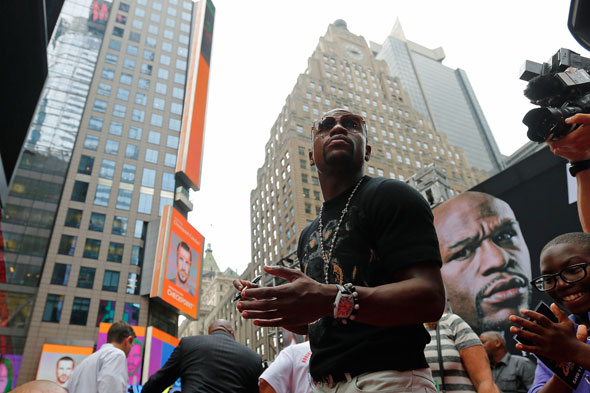 NEW YORK CITY – Who would have thought the burden of being the wealthiest athlete in the world, the best boxer on the planet and the standard bearer for an entire sport would be this heavy? Ten years ago if you had asked Floyd Mayweather Jr. if he thought the crown would weigh this much, he probably would have said you were crazy.

Watching a weary Mayweather go through another round of interviews with a group of reporters at the Marriott Marquis on Monday afternoon, I couldn’t help but think about the old gangster Hyman Roth from “Godfather II” who told Michael Corleone: “This is the life we have chosen.”

You accept the good with the bad and you keep going. Someone asked if he was still having fun after all these years.

And he was still five hours away from a 6:30 p.m. press conference in Washington, D.C.

Mayweather is not old in boxing terms. He is 37 and hasn’t taken any beatings. But he has been around for a long time. Between amateur and pros he’s been at it for over two decades. He knows all the answers to all the questions before they’re asked because he’s heard them all before.

He was back in the grind of a five-city tour, beating the bushes for pay per views because he didn’t do it the first time around when he fought Marcos Maidana back in May. And the numbers were dismal, regardless of the spin that his money people are putting on them. Various reports put them around 900,000, which is very un-Mayweather-like. Any other boxer would be doing backflips over the kind of loot produced by those numbers at $75 per. But “Money Mayweather” has backed himself into a corner. He kept telling us he’s the over 1-million pay per view man. Now when he doesn’t hit that mark it’s looked upon as a failure.

“I don’t know where that comes from,” he said. “Historically Floyd has averaged a little bit over a million, maybe a little higher after the Canelo (Alvarez) fight. That’s where it comes from. The million buy doesn’t represent any break point for us.”

Mayweather is a victim of his own success – inside and outside the ring.

An awkward, foul-prone boxer like Maidana rushed Mayweather into the ropes, landing a few punches and those who are anxious to see Mayweather take an “L” heralded it a near victory for Maidana. They point to Mayweather slowing down, losing his legs. They see him as vulnerable. What they don’t understand is that 50 percent of Mayweather is better than 100 percent of anyone who fights him.

Whenever he took Maidana to the center of the ring, it wasn’t even close. Expect him to keep Maidana in that general area in the rematch.

“Floyd is on autopilot,” said Jeff Mayweather, his uncle. “He’s already three or four steps ahead. I’ve never seen a fighter make adjustments as fast as he does. He’ll try this and if it doesn’t work, he’ll change and keep doing it until it doesn’t work. He’ll stand in front of you and outsmart you and beat you at your own game. You can do what you plan to do, but you’re still losing. That’s the one thing that separates Floyd from so many fighters who came before him.”

And he was talking about all the greats – Sugar Ray Robinson, Joe Louis, Muhammad Ali, Sugar Ray Leonard. People cringe when Mayweather talks about being the best ever. But Jeff thinks he might be.

“At 37 years old he’s still the best fighter in the world,” he said. “That wasn’t the case for some of the greats, not Ray Robinson, not Joe Louis, not Sugar Ray Leonard. In their mid-30s they were done. They were shells of themselves. That speaks volumes about little Floyd.”

No one wants to hear that, so Mayweather has stopped saying it. He seems resigned to hearing the criticism regardless of what he does. He realizes there are some fights that he won’t win and aren’t even worth fighting.

When the notion of equaling or surpassing Rocky Marciano’s 49-0 record came up again on Monday, he simply said he has nothing but respect for Rocky Marciano and his record.

He’s right. This is his era. It just happens to fall during a time when perfection isn’t celebrated. Instead, many people, for whatever reasons, want to see it destroyed.

Oddly enough, outside of a fight with Manny Pacquiao, Mayweather’s biggest fight might come after a loss, according to Espinoza.

“I actually think the pay per view after he loses, if he happens to lose, will be bigger,” Espinoza said. “I think there is such a curiosity about Mayweather and he has such a persona, the curiosity factor on how he will respond to a loss both inside and outside the ring will make up for any sort of loss of the fa├ºade of perfection.”

As crazy as it sounds, Espinoza is right. Success never felt so bad.