Art Hovhannisyan looks to rebound from first loss on FNF 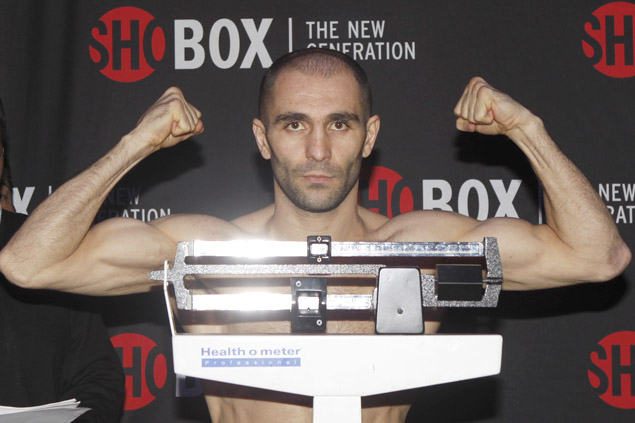 The old boxing saying “You learn more in defeat than in all your victories” resonates in the minds of Art Hovhannisyan.

Just 18 months ago, Hovhannisyan was an unbeaten fighter who was beginning to crack contender status and become known in boxing circles. Then it all came crashing down when he suffered his first defeat as a pro.

While the loss saddened Hovhannisyan, it was the best thing that could have happened to the Armenian-born fighter.

Hovhannisyan will fight Jonathan Maicelo in a crossroads bout between once-beaten lightweights at the Little Creek Casino Resort in Shelton, Wash on Friday night. The 10-round bout, along with a 10-round middleweight main event between Tureano Johnson and Mike Gavronski, will be televised live on ESPN2 at 9:00 p.m. ET/ 6:00 p.m. PT.

The last time Hovhannisyan fought on a nationally-televised fight was in February of last year. He was favored to defeat Alejandro Perez and started out well from the opening bell. Then the momentum of the fight shifted to Perez’s favor, where he beat Hovhannisyan to the punch and was the more effective fighter until the final bell in winning a unanimous decision.

The loss to Perez was a learning lesson for Hovhannisyan (17-1-2, 9 knockouts), who resides in the Los Angeles suburb of Glendale. Whether he is fighting a journeyman or a world title holder, Hovhannisyan can not and should not let up physically or mentally.

Since the loss to Perez, Hovhannisyan has won his last two bouts in a row, including an eight round unanimous decision over Miguel Zuniga on April 12 in Inglewood, Calif.

He will face a fighter in Maicelo on Friday night that is a dangerous puncher with an aggressive style. Maicelo’s only defeat was to hard-hitting Russian Rustam Nugaev in April of last year.

“I am ready (for Friday night),” said Hovhannisyan, who is promoted by Gary Shaw Productions. “If he (Maicelo) wants to box, we can box. If he wants to brawl, we can brawl. He’s a puncher, but he can’t surprise me. I can punch too, and I can punch really hard.”

It is not only Hovhannisyan who believes the loss to Perez was a blessing in disguise. His manager, George Bastrmajyan, sees a different demeanor in Hovhannisyan, one where he is much more hungrier, yet loose in the gym.

Hovhannisyan may not have too much time left as a serious contender as well. He will turn 33 in November and a loss could seriously thwart a path towards fighting for a world title belt.

Despite having only 20 fights as a pro, Hovhannisyan believes he is more than ready to fight 12 round bouts against top contenders or even world champions. One fighter he has his eyes set on his WBC lightweight champion Omar Figueroa.

“I’m ready to fight and beat any lightweight out there,” said Hovhannisyan, who reportedly has over 250 amateur victories. “I’m mentally in a better place now than where I was before.”

Hovhannisyan talks a good game, but it will remain to be seen if he has learned from his loss to Perez or if he could contend for a world title.

There could be bigger and better fights in Hovhannisyan’s future, but he has to take care of business against a formidable foe in Maicelo. He does not want for deja vu to happen again, considering it is an important television fight.

With so much on the line, Hovhannisyan will have the mentality of win or bust.

“I can’t afford a loss. Compared to the Perez fight, I’m willing to die in the ring.”