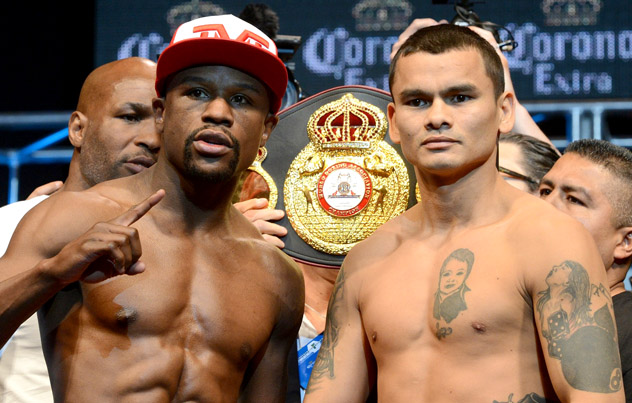 Pound-for-pound king Floyd Mayweather Jr. announced on his Twitter account that he will fight a Sept. 13 rematch with Marcos Maidana at the MGM Grand in Las Vegas. Leonard Ellerbe, CEO of Mayweather Promotions, confirmed to Yahoo!Sports that the bout will be promoted by Golden Boy Promotions.

Speculation existed that Mayweather might take the rematch to Barclays Center in Brooklyn given that Mayweather Promotions applied for a license from the New York State Athletic Commission, received a license to promote in that city ,and had hired former Golden Boy Promotions Chief Operating Officer, Bruce Binkow, as a consultant.

Binkow’s exit followed the resignation of Richard Schaefer, the former Golden Boy Promotions CEO. Given Mayweather’s close relationship with Schaefer, there was speculation that Mayweather might no longer work with Golden Boy, a notion Ellerbe later dismissed.

In addition, Barclays Center has become a popular venue for boxing, and appeared to be in line to host the fight, with Madison Square Garden having an Eagles concert on Sept. 13.

Barclays Center CEO Brett Yormark didn’t land Mayweather-Maidana in May despite what he called the “most unprecedented offer that’s ever been made outside of Las Vegas.” Yormark said the “offer is still there for him to call Barclays Center home” during an earlier interview with RingTV.com.

Mayweather’s net revenue of $105 million over the course of his majority decision victories over Saul Alvarez and Maidana in September and May, respectively, made him the world’s highest-paid athlete over the past 12 months, according to Forbes’ magazine.