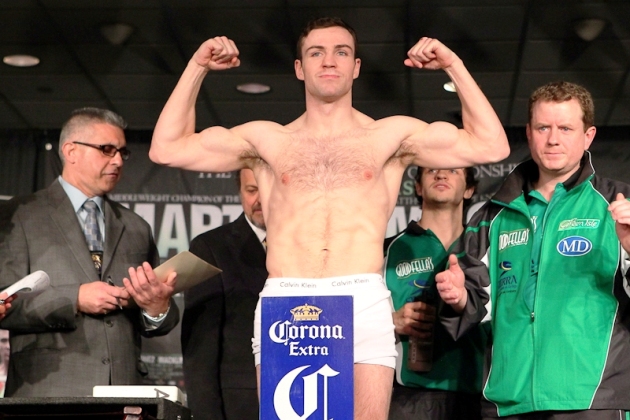 Middleweight title challenger Matthew Macklin will headline an event against an opponent to be determined on August 30 at National Stadium in Dublin, Ireland, Eddie Hearn of Matchroom Sport announced on Thursday.

Macklin (30-5, 20 knockouts), 32, is 2-3 with one stoppage win in his past five fights and is coming off a unanimous decision over previously unbeaten Lamar Rush in December.

In succession, Macklin’s losses during that time were to Felix Sturm by split decision in a failed attempt to win the WBA belt in June 2011; an 11th round stoppage loss to then-RING champion Sergio Martinez, whom he floored in the seventh round in March 2012 and by third round knockout against WBA titleholder Gennady Golovkin in June 2013 before facing Rush.

“It’s been four years since I last boxed in the UK and five since I boxed in Ireland,” said Macklin, who decisioned Rafael Sosa Pintos in Ireland in December 2009, and Ruben Varon in Liverpool in December 2010.

“So I am really looking forward to boxing this side of the Atlantic again. The National Stadium has always been a great traditional venue for Irish boxing, and I think the atmosphere on Aug. 30 will be electric.”

Also slated for the card are 2012 British Olympic gold medalist heavyweight Anthony Joshua although Joshua will have to get beyond Saturday’s fight with Matthew Skelton at Echo Arena in support of former light heavyweight titleholder Nathan Cleverly and ex-175-pound title challenger Tony Bellew in separate cruiserweight bouts.

Also on the Macklin card is a middleweight match-up between Gary “Spike” O’Sullivan and Anthony Fitzgerald.

“I have been looking at bringing a big show to Dublin for some time and I am delighted to start a new era there for Matchroom Boxing on August 30 headlined by Matthew Macklin. Matthew is a proven, world-level fighter on the verge of another world title shot and I am delighted to also be working with our American partner Lou DiBella on making that happen,” said Hearn.

“Fans in Dublin can expect a corker of a card with Olympic super heavyweight king Joshua fighting in the city for the first time as a pro and an all-Irish grudge match between Spike O’Sullivan and Anthony Fitzgerald. We will announce a full card at a press conference in Dublin soon, and tickets will go on sale the week commencing July 21.”

Selby will take on unbeaten Joel Brunker in an IBF eliminator for the right to face beltholder Evgeny Gradovich, and, on Oct. 25, lightweights Luke Campbell and Tommy Coyle will be in action in separate bouts against rivals to be determined at the Hull Ice Arena.