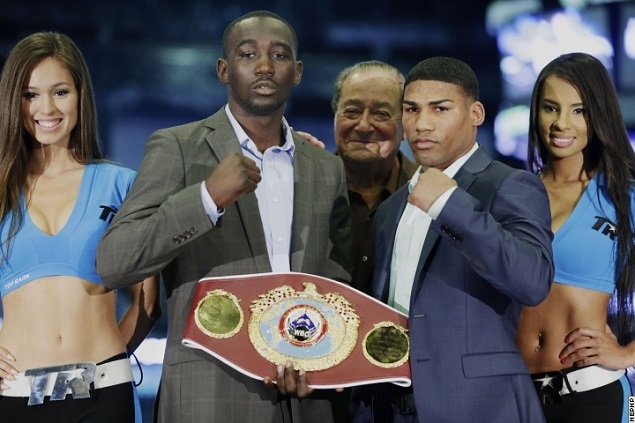 It was back in March 2013 when Terence Crawford rose in weight for a unanimous decision victory over Breidis Prescott, a fighter whom once scored a 54-second knockout of Amir Khan.

A year later in March, Crawford traveled to Glasgow, Scotland, where he dominated and dethroned Ricky Burns as WBO lightweight titleholder, ending Burns unbeaten streak at 21-0-1 with eight knockouts.

On Saturday, at CenturyLink Center in his hometown of Omaha, Neb., Crawford faces perhaps his stiffest test to date in Cuban Olympic gold medalist Yuriorkis Gamboa, a 32-year-with whom he shares an identical record at 23-0 with 16 knockouts.

Crawford, 26, said the challenge of facing Gamboa compares favorably to that of Prescott.

"That was very important. I think that was the key to my career. You take risks; you get rewards," said Crawford, referring to the win over Prescott. "I felt like, you know, in this Gamboa fight, it's a great fight but it's a risky fight and a high reward fight at the same time. So I'm just taking it as the same that I took the Breidis Prescott fight."

Gamboa's most recent bout was a unanimous decision over previously unbeaten Darleys Perez on June 8, 2013.

"I have stayed active – maybe not in the ring," said Gamboa, referring to his relative inactivity, "but I have done what I need to do outside of the ring to be prepared for Saturday night. I have remained active in the gym."