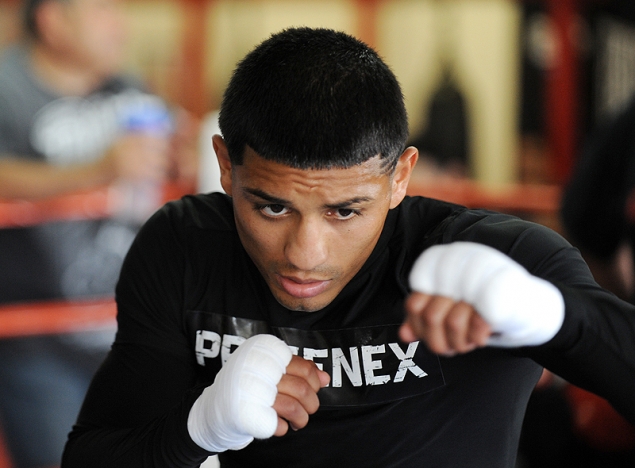 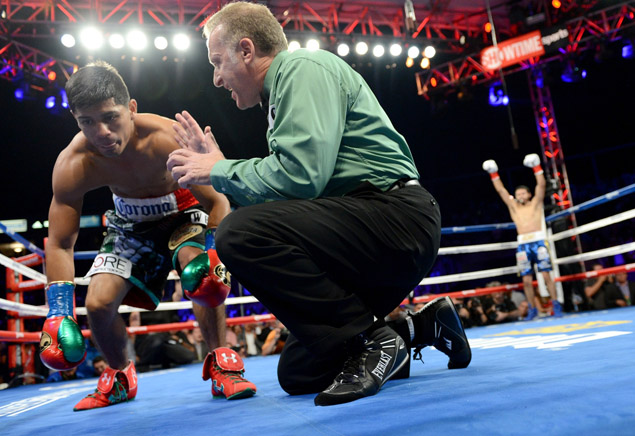 Abner Mares struggles to stand after being knocked down by Jhonny Gonzalez on Aug. 24, 2013. Photo by Naoki Fukuda.

"A more intelligent" Abner Mares will enter the ring against veteran Jonathan Oquendo, Mares said during a Thursday conference call promoting the event.

Mares-Oquendo is the chief support on the Showtime PPV undercard of the July 12 Canelo Alvarez-Erislandy Lara main event at the MGM Grand in Las Vegas. It will mark Mares' first fight under trainer Virgil Hunter.

"You're going to see a more intelligent fighter with a little bit more boxing. There are things that I already have that Virgil is bringing back out, and he's polishing them up," said Mares, who was last in action nearly a year ago when he lost his WBC title to Jhonny Gonzalez by a shocking first-round knockout.

"Virgil is teaching me and showing me different things. I've always liked to fight, and I've always liked to go toe-to-toe, and to come forward and to be agressive. Now, I'll still have that, but you're going to see a little bit of the boxing as well. I know that we have a tough, strong opponent, and so we're preparing for that."

"Virgil is tweaking things, he's improving things, and I'm seeing things more clearly that I've already known. We're working together," said Mares, 28. "I've seen a lot of progress within the sparring sessions, already, so, believe me, when fight night comes, all of that will be shown."

In switching to Hunter, Mares is hoping for similar success to that of Khan, who scored three knockdowns during a unanimous decision over ex-beltholder Luis Collazo in Khan's welterweight debut in May.

Khan's triumph represented his third victory in as many appearances under Hunter since leaving longtime trainer Freddie Roach, including a 10th-round stoppage of Carlos Molina in December 2012 as well as weathering a fourth-round knockdown in a unanimous decision over former titleholder Julio Diaz in April 2013.

"I would like to think that you will see improvement right away, just like Khan was in his last fight against Luis Collazo," said Mares. "Like I said, I've shown a lot of progress already, and I think that's what you will see in Abner Mares that night."

Mares twice defeated ex-beltholder Joseph Agbeko (the first bout earning him the IBF 118-pound title), earned a split decision over two-division champ Vic Darchinyan and battled to a draw with then-titleholder Yonnhy Perez – all over a 20-month span as a bantamweight.

Mares then moved up to junior featherweight, where he outpointed Eric Morel for the vacant WBC 122-pound title in April 2012. In November 2012, Mares scored a fifth-round knockdown en route to a unanimous decision over WBA bantamweight titleholder Anselmo Moreno before facing Ponce de Leon.

"I am used to fighting often against quality opponents," said Mares, "and every time out I like to go back and look at what we were doing and how we could progress. You would see progress in every fight, and every fight you would see a different Abner Mares.

"This camp, I've switched coaches, and you will see a different Abner Mares again. This whole time being off, it's just helped me to get hungrier and helped me to get healthier, and it's helped me to get better, mentally. So believe me, I'm ready, and I'm taking this fight like it's my debut fight."

The 30-year-old Oquendo (24-3, 16 KOs) was last in action for a unanimous decision over Guillermo Avila in March, his second consecutive win since falling by seventh-round knockout to ex-beltholder Wilfredo Vazquez Jr. in October 2012.

"[Oquendo is] a hungry fighter, and he's coming off of a fight earlier this year, so he's got that advantage. He's a tough, hungry fighter who wants to win, and I know him, because we've both been with Golden Boy Promotions for a period of time," said Mares.

"We've fought on a couple of the same cards. He's a tough cookie, and nice fight for my comeback. That's what I need. Someone who will take me into deep waters to revive that Abner Mares and get that anger back in me."

Oquendo's other losses were by disqualification to Oscar Andrade in 2007, and by third-round knockout to Juan Manuel Lopez in 2008.

"The couple of times that I lost, I wasn't in the best preparation that I could have been in, and I've learned from that," said Oquendo. "We're taking this very serious. I know Abner Mares, I know his capabilities, and I know how signficant this fight is. We were both, at one time, with Golden Boy.

"I always thought that there was a possibility that I would have this fight, and that down the road, we would make it. I've had a couple of losses, but this is Puerto Rico versus Mexico, and now we have a good team and we're preparing very well. I'm excited, and the fight is here, I'm very excited, and I'm looking forward to it. … A win here is better than winning the title."